Silver Synthetic play May 19th at LOCO CLUB! Exclusive interview…
‘BRYAN ADAMS’ PLAYS IN VALENCIA THIS SUMMER ON JULY 19th!
STRAWBERRY EXPLOSION! By Helen Westwater ‘La Ola Fresca’
THE BASILICA OF SAN LORENZO IN ROME OPENS ITS DOORS TO THE CULTURAL ASSOCIATION OF THE WAY OF THE HOLY GRAIL
‘SILVER SYNTHETIC’ PLAY ‘LOCO CLUB’ ON MAY 19th 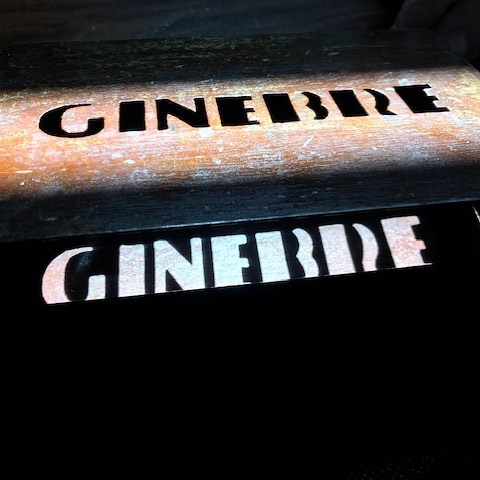 Exquisite flavours, perfect culinary combinations and impeccable service: dining at Ginebre was a wondrous experience that will stick with me for some time. It is hardly hyperbolic to say the meal I enjoyed at Ginebre was one of the best I have ever tasted. The flavour sensations of the creative cuisine served at Ginebre are unique and unlike any I’ve had the pleasure of sampling before.

From the colourful aubergine taco to the juicy pickled tomato salad, all of Ginebre’s food is fresh, flavourful and delicately balanced to produce dishes of the highest quality, as enjoyed by celebrities such as Pulp Fiction star, Maria de Medeiros, who recently dined at Ginebre during Valencia’s Cinema Jove film festival. It’s easy to see why Ginebre is a favourite of stars and locals alike: you will understand why after only one spoonful of their delicious cuisine! Clearly created by passionate chefs and culinary experts, Ginebre’s dishes ooze passion and artistic flair, much like the interior of the restaurant itself, with the walls adorned by jazz musicians and captivating abstract imagery, fronted by an extensive selection of gins.

My friend Betty and I were treated to eight different dishes at Ginebre, beginning with an aperitivo of velvety hummus: the perfect warm-up before sampling the beautiful ‘ensalada de tomate escabechado’ (picked tomato salad). Tossed with tasty black olive flakes and lying on a bed of creamy stracciatela de burrata, this salad was extremely fresh and beautifully presented. As was the taco de berenjena (aubergine tacop), which was so vibrantly coloured that it resembled a piece of art! “It looks like a painting!” said Betty, as the dish was placed before our amazed faces. A treat for the eyes and the taste buds, the combination of flavours in this taco, which was covered in yellow kimizu sauce and garnished with pico de gallo, was undeniably perfect.

Surprisingly, the most interesting and unusual dish we tasted was Ginebre’s twist on the Spanish classic: patatas bravas. Named ‘milhojas de patatas bravas Madrid-Valencia’, this dish takes its name from authentic patatas bravas first served in Madrid with only tomato/paprika bravas sauce, which has since been adapted to include garlic alioli when served in Valencia and elsewhere. In contrast to traditional patatas bravas consisting of individual potato cubes, this dish was served as two rectangular, layered potato slices covered in an incredibly tasty tomato-based sauce and garnished with three pearls of garlic alioli, finished with a sprinkle of herbs and paprika to create the perfect, distinctive patatas bravas. Striking presentation and rich flavours: these were the best patatas bravas I’ve ever eaten!

For ‘los principales’ (mains), Betty chose the seafood rice, which she thoroughly enjoyed, and I sampled the specially-created vegetarian pumpkin gnocchi dish. Creamy, herby and topped with just the right amount of those characteristic black olive flakes, the gnocchi was absolutely divine. I would be hard pressed to choose a favourite dish because they were all so unbelievably delicious!

To finish, we decided to try both the chocolate chip cookie with salted caramel ice cream and the intriguing ‘fresones confitados’, which was candied strawberries with white chocolate and yogurt mousse. Both of these desserts were delightfully sweet, with the ‘fresones confitados’ creating a unique flavour sensation between the perfectly balanced sweetness of the strawberries and chocolate and the tartness of the light yogurt mousse, which Betty delightfully described as “like a cloud in your mouth!”.

After our incredible meal, we sat down with Ania Poprawka, wife of restaurant owner, Javier Puchades, to talk about Ginebre and her life in Valencia.

Can you tell us about your background and meeting Javier?

I’m from Poland. When I was three years old we emigrated to South Africa and when I was 18 I moved to Edinburgh to study Urban and Regional Planning and then I moved to Valencia. I was so tired of the weather in Scotland and I always dreamed of coming to Spain! I moved over here and started teaching English.

I met Javi for the first time here in the restaurant! Some of his friends that I was also friends with came here for dinner one night before we went out. I came here to join them and I met Javi. I thought he was a really interesting kind of guy and it all kicked off from there! Once, I went to his house with a group of friends for brunch. He organised this amazing brunch with his sister; we had so many nice cheeses and wines. Then we got to know each other quite well and the rest is history as they say!

I used to work very close by in an English Academy so I was here in the restaurant all the time. When I was in Edinburgh I worked as a waitress while I was studying, so I used to help him out a lot. Now I have two little boys so I’m not here that often any more. I still try to come when I can and help out a bit.

Can you tell us more about your life here in Valencia?

I love Valencia; I’m so happy here. I love that people are so laid back. You can just kind of do what you want. It’s perfectly fine to have a little beer at 11am on a sunny terrace; no one is going to judge you for it! I like the atmosphere of the city as people are really friendly and open; nothing is a problem. Obviously the weather and the beach are amazing too. There is a lot of outdoor life. It’s easy with kids as well because they’re always outside playing; you don’t need to wrap them up in a million jackets. Everyone is just so chilled. For example, breastfeeding is perfectly acceptable here; you can do it anywhere. In other countries they always have something to say.

I’ve been living here for ten years and I’ve been with Javi and helping him out in the restaurant for seven years. Actually the ten-year anniversary of the restaurant is this year (November 2020)! For the five-year anniversary we had a really nice party with a band and we invited all our regular customers and the staff and their families. We prepared the food canapés beforehand and we got a catering company to come in and serve. We wanted to do something similar, but bigger and better, to celebrate ten years but we can’t at the moment because of the pandemic. Maybe after we can! We have lots of regular customers as this isn’t a very central location like El Carmen, so most of the people come specifically because they know the restaurant. And, apart from that, a lot of people who work in the offices nearby come to eat here too.

What inspired Javier to set up the restaurant?

His mum has a restaurant as well, which is one of the first vegetarian restaurants established in Valencia: Les Maduixes. Now his mum is retired and his sister works there. He grew up in the restaurant atmosphere and business but he wanted to open his own place. He loves food and loves cooking. He used to work there helping out as a teenager and in his early 20s. His grandmother used to cook his lunch everyday when he was in high school and university. She would make three courses every single day for him and his cousin. He was always telling me about the amazing dishes she’d make. Today on Ginebre’s menu there is a stew, which I think was inspired by his grandmother. It has almonds and carrot in: quite traditional ingredients. He definitely gets ideas from his mum too. Sometimes they cook together at home on a Sunday. He doesn’t normally cook at home; most chefs don’t cook at home very often because they spend all day cooking at work, but when they do it’s worth it!

As several dishes on the menu change daily, how do you decide which new dishes will be there each day?

Around three, four or five dishes change on the menu each day: sometimes more, sometimes less, depending on the day. There are lots of typical dishes that have always been on the menu, like the ‘ensaladilla rusa Ginebre’ and ‘croqueta de pollo a l’ast’. Those are the kind of dishes that are famous in the restaurant and are almost always on the menu. Then, they like to create new dishes depending on the product that comes in. Their fish supplier might say I’ve got a big tuna in, so they’ll get that and create some dishes. The menu also varies depending on what’s in season and what fresh produce they get. They’re very creative; they get inspired and they want to try things. They’re constantly thinking up new dishes. I think it would be boring to always have the same thing every day.

Do you have a favourite dish?

It’s difficult because they’re all so good. I love the croquetas, patatas bravas, ‘ensaladilla rusa Ginebre’ and pretty much everything to be honest! A Russian salad is really typical in Spain. It has potatoes, carrots, peas and hard-boiled egg all mixed together with mayonnaise. Here they also add a mayonnaise foam and some lime peel grated over it, so it gives it a real nice freshness. It also has some tuna flakes on top.

Do you have any interesting stories of people who’ve dined here?

Maria de Medeiros…the Portuguese ‘Pulp Fiction’ film star, director and musician… dined here when she was in Valencia, for ‘La Mostra de València’ film festival as guest of honour. The festival organisers come here for lunch or dinner every year. They usually bring someone; that year it was Maria de Medeiros. We don’t have too many famous visitors but there have been a few. The Spanish Minister of Health used to come here all the time for meetings. There have been some sports stars and politicians too.

The round table at the back of the restaurant with the curtain divider is really popular for people who want a bit more privacy; people ask for it all the time. People often have birthday parties here and bring their cake and balloons to decorate this little area.

The restaurant is all him: the décor and the dishes. I’m just so proud of Javi. It’s eleven years now and he never gets tired. He’s always full of ideas and he’s so passionate about it. Every day Javi and the team come in here fresh and they love bouncing ideas off each other and thinking of ways to improve. There have loads of passion and motivation, which is something I really admire. There’s so much attention to detail. I might not notice things but Javi notices every little detail; everything always has to be perfect and he works really hard.

The French chef Flo used to work with another chef who worked here before. We also have Mauri, who does the starters and desserts. They’ve made a really good team and work together really well. It’s difficult to get a team that really gels, but this team is amazing; it’s one of the best we’ve had! Javier the waiter is amazing (his name is Javier as well!). They’re always joking and having a laugh, so it’s a really good atmosphere.

For your next special occasion or to treat yourself to some of the best cuisine in Valencia, be sure to head to Ginebre soon.