You are here: Home  /  Editorial  /  Music  /  A HYMN TO SOLIDARITY AMONGST WOMEN IN VALENCIA & THE WORLD
Editorial 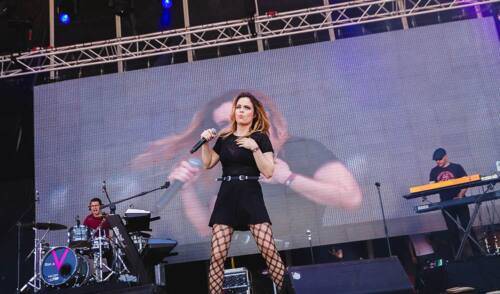 A HYMN TO SOLIDARITY AMONGST WOMEN IN VALENCIA & THE WORLD

##Valencian band ‘ESJAVA’ premieres its theme and video “Sororidad”. It is the second single of the album that the band will release at the beginning of 2020 and that mixes slow tempos with powerful guitar riffs to offer a strong track where the cadence of pop is not missing. The song coincides with a complex historical moment in which at the same time that important advances are being made for women, gender violence continues to take lives and cases such as La Manada are multiplying. ‘Sororidad’, already present in all platforms, was recorded in both natural and urban environments, includes a feminine diversity that crosses categories such as age and race, to express feminine unity in words & images. The Valencian band ‘Esjava’ releases its new single and video entitled “Sororidad”, a hymn to solidarity, trust, loyalty, support and recognition among women: https://www.youtube.com/watch?v=97ArmtIsO8U

Esther Ortega (vocals and keyboards), Alejandro Romera (guitar), Jorge Serra “Koki” (bass), Genaro Mateu (drums) and Héctor Valero (keyboards) make up the band that owes its name to Java, the island of Indonesia and will deliver the complete album in early 2020.

This new track escapes musical labels and serves as the anthem for a turbulent era in which while there is a resurgence of feminism and the fight against inequality, death rates from gender violence continue to grab the headlines and events that have awakened public awareness, as was the case of La Manada, episodes that inspired the vocalist to compose “Sororidad”.

And although social concerns are not alien to the repertoire of the band, which already addressed depression and alcoholism in “Elephants” from their first album “Where Fears Die”, “Sororidad” is distinguished by its positive tone that is both powerful & playful, starring real women who reflect the plurality of the female experience.  The video that superimposes shots in natural spaces with others taken in urban environments also plays with the alternation between the aesthetics of a homemade camera with that obtained from a high-definition equipment. On the other hand, the women who appear in the camera are old women, girls, young people, relatives, friends, who give a unique authenticity to the audiovisual document, which reflects a very current time.

Alex, a member of the group, was responsible for putting himself behind the lens to go through the complexity of women, in plural, whose lives are marked by their gender and which at the same time are crossed by many other axes such as race, age, motherhood, the decision not to have children or sexual preference.

The video adds to the road travelled by ‘Esjava’, which includes participation in Rock This Town at the Benicàssim International Festival, one of the largest in Spain, and which has added experience and road tours such as the one made with “Girando por Salas”: One of the most important national competitions organised by the Spanish Ministry of Culture together with Mondo Sonoro, Radio 3, LH Music Magazin, Sol Música, Mariskal Rock and Escenarios, who chose them to allow them to bring their live performances to seven concerts in different parts of Spain.

Raúl Nácher has been in charge of the production and recording at Soniart Studios of this song released under the new label “SODA LEMON”, conceived to accommodate independent music.

Esjava’s new single and video “Sororidad” is now available on all platforms.