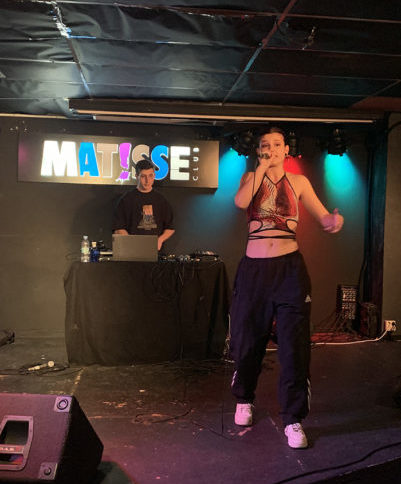 A NIGHT OF HIP-HOP AT VALENCIA’S ‘MATISSE CLUB’

These artists represent a new generation of Valencian musicians, speaking on a variety of issues, from love, heartbreak and mental health to the struggles of workers and life in Valencia’s working class neighbourhoods. This event was run by Horitzó Socialista, a Valencian and Catalonian Socialist group which defines itself as “an organ for reflection and dissemination of the communist youth in the Països Catalans, which aims to be a space for theoretical elaboration and the defense of the thesis of the Socialist Movement.”

Aris O’Hara opened the concert, performing songs from her debut album In Albis. At only 20 years old, Aris is an exciting young talent with a powerful voice and punchy flow combined with a dynamic stage presence that made her a joy to watch. Aris left the stage to thunderous applause, and chants of “Ariiis, Ariiiis!” As the opener she set the bar very high for the following acts.

Maria Colt was another powerful and diverse talent. Singing and rapping in both English and Spanish, with a captivating style in both art forms in language, Maria Colt grabs your attention and holds it until she is ready for you to stop listening. This gig comes on the heels of her latest single ‘Memphis’, in which she collaborated with rapper Dope Rodriguez, in which Colt displayed deep and rich melodies similar to popular artist Canadian-Colombian artist Jessie Reyez

The headliners, rap quartet ‘Paranoia’ came out strong with the warning, “if you want to get a drink now is the time to get it. Once we start we don’t stop and you’re not going to want to miss it.” They weren’t bluffing. Paranoia thundered through song after song, each one getting the crowd jumping and dancing to the pulsing beat and the furious rhythms of the rappers verses. Despite having picked up an injury, one of the group performed from a wheelchair. From the power and passion in his every word, it was clear that this injury was not holding him back. Like magicians pulling rabbits from a hat, Paranoia pulled rapper after rapper on stage from the crowd, each one adding something unique and exciting to the performance during their time in the spotlight before heading back into the crowd. Paranoia spoke on the labour struggles in their workplaces, and the tough life they had lived back in their neighbourhoods, urging for solidarity between workers and strike action to secure better wages during this time of skyrocketing inflation. With their catchy and political lyrics, Paranoia is definitely a group to watch.

Speaking with Aris O’Hara after the gig, I got some more insight into her creative process and her views on the Valencian and Spanish rap scene. One of her songs was performed acapella, giving a spoken word feel to some sections of her gig, which intrigued me as a poet.

Do you write poetry or are you influenced by it in your writing?

Aris O’Hara: I don’t always write to a beat, and I sometimes write poetry and stories which I’ll write with a rhythm in mind. The one I performed a cappella I wrote to a beat, but I enjoy performing it without music too.

What made you want to be a rapper?

A O’H: I’ve been writing since I was little and I loved music as well. I wanted to write for music and thought they would be perfect to link together, as well as dance. I do street dance which has links with house and hip hop. Rap was the genre that lent itself to all of these and helped me express myself the best”

How would you describe the rap scene in Valencia and your entry into it?

I got into the rap scene bit by bit, getting to know everyone on the scene, making connections and collaborating with people until I got to know everyone. We are all like a family now those who rap in Valencia. There’s a big rap scene in Valencia, but not as big as other cities, it’s more between people who know each other rather than a broad popular fan base. There’s also more female rappers in places like Barcelona than Valencia.

How would you describe the growth of female rap in Spain?

In Spain we have great female rappers like Mala Rodriguez and Arianna Puello, they’ve been growing a lot. More and more women are getting into the genre and it’s becoming more equal. It’s still a genre with more men than women, always seen as masculine, and aggressive and aggression is something not normally linked with women. Women have a lot of character and personality and that comes out really well in rap.

There’s been a lot of hatred towards feminists. I was in a concert and the only woman who was performing and I was the last act of the night, with some quite well known rappers from Malaga and Madrid. There were obviously a lot of male rappers who wanted to perform and were saying that they only gave me the slot because I was a woman and they had to include me. But it’s not the case, I fitted better with the rest of the bill and I lived closer to the concert venue. At the end of the day, it’s good to have variety in a show. There are a lot of women who do music and a lot of women who do rap so it’s important to have women in the show. There are some people who will use you being a woman against you, because of jealousy and spite that they didn’t get to do the show that I was performing in, or their careers aren’t where they want them to be.

What do you think of the case of ValtoNYC, the rapper who was sentenced to jail and forced to flee to Belgium for his anti-monarchist lyrics that also defended migrants?

A O’H: Although I think any kind of extremism is wrong… I don’t think someone should be censored or sentenced to jail for a couple of lines in a song… anger makes you exaggerate. Despite what he said in his songs, I don’t think he was going to take the King’s head off. I think it’s crazy that they could send him to jail for expressing himself… people have the right to their opinion.”

Following on from your debut album In Albis, what does the future look like for Aris O’Hara

A O’H: I am  looking to take my music in new directions, towards techno, house, drum and bass, blues and RnB. I want to mix as much as I can and experiment with different genres.

What should you do when coming to Valencia for the first time?

A O’H: If you’re coming to Valencia for the first time, it’s very much a cliché… but eat paella… but be careful what you eat, there are some people who make it but don’t make the real thing. Make sure you eat it in the countryside and from someone who has been making it all their lives. In terms of music, ‘16 Toneladas’ and ‘Matisse Club’ are really good, as well as ‘Radio City’ in the old town where they have live music every week.”

For more on the featured artists: