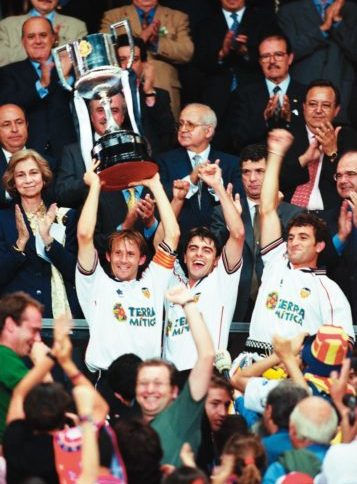 GAIZKA MENDIETA: Flying! A lot of travelling whether it is for work or for personal reasons. I work from home or I have meetings. I try to get the right balance between work and quality time with family & friends. I have a lot of commitments with Television and La Liga. My own businesses on both sides of the continent keep me pretty busy, in the UK and Spain. Luckily, I am able to administrate that so I can get time off now and then, which is what I like about my schedule since retirement. I would say that the common denominator would be a lot of flights and a lot of taking offs and landings!

2. What music are you listening to these days?
Apart from the usual and the classics, I’m currently listening to Eliza Shaddad, Bad Sounds, Red Rum Club, White Town, Danny Nedelko and BRONCHO.

3. How does living in London compare to Valencia?
(Laughs) It’s a tough comparison because I think that they are completely different cities! I love London for everything it has to offer: music, entertainment, sport. I think London is unique in the world, probably up there with cities like New York and maybe Paris.

Regarding the size of population Valencia is a much smaller city, which is what I like. You can go anywhere cycling or walking. Everything is so handy. Also I like the historic side of the city with so many monuments and there are so many places to visit as well…although it is not as big as London. Probably, I like that contrast as I tend to go quite often to Valencia. So, I get the hype of the big city in London and then I get the more relaxed sorts of things in Valencia…

4. Tell us about the highs and lows of having played for Valencia CF
I can only really think about the highs. I was lucky with injuries when I was there. My only lows would be not winning more trophies but that’s really just the way a sport is. It was tough in the beginning, trying to get into a big team at just 18 years of age. There are loads of highs; the day I arrived in Valencia, since the day I made my debut and played my first match for Valencia CF and winning trophies and getting to finals. It was 10 years that I was at Valencia so it’s difficult to pinpoint all the highs. In the long run, when I look back at my time in Valencia they are all great memories… a lot of friends. It wasn’t always easy but I had great times. I definitely changed as a person and as a player. It was fantastic… an amazing time.

5. How do you see Valencia CF in more recent times?
They have got to the the final of the Copa Del Rey again. Let’s hope that they can enjoy this season and can give some happiness to the fans, the club and also for the players themselves. The centenary was quite an irregular year but ended well. We were expecting the team to do better in recent seasons but it is difficult when you compete in various competitions: La Liga and the Cup and sometimes Europe too. It’s very demanding, the expectation of the club and the fans. So, it is not easy and I understand that.

6. You have played in the Spanish ‘La Liga’ and The English ‘Premier League’. What are the differences?
There are a lot of differences. Both have changed a little bit since I retired but the characteristics are still more or less the same. I would say that the pace in the Premier League is a bit faster and it is a more physical game. La Liga is the one that I enjoy more to watch. It is more individual, technical & tactical.

7. Tell us more about your DJ activities…
Unfortunately, I don’t DJ as much as i would like due to other job commitments in my life but I try to do it now and then… from private events to clubs & festivals. It’s great that there is a demanding public out there and I’m lucky & grateful for that. I understand that there is an ingredient there: the “music & Mendieta the football player” that it is a very attractive thing for many people. It’s great that I can bring two of my passions together (music and football) and share it with the fans.

8. One day, could you see yourself writing a book about your life?
To be honest, I was recently offered the possibility of writing a book about my life. However, it is difficult because I believe that when you write a book about your life you have to be as close and honest to the truth as possible so that you tell the real story and I’m afraid that’s a bit difficult (laughs) and it’s a bit challenging! It is said that everyone would like to do a book at some time in their life. At a certain age, I would like to do it. Yes, I would love to do that at some point definitely…