You are here: Home  /  Music  /  ETERNAS: ‘MUJER CREADORA’ AT TEATRE TALIA: “THIS COULD BE THE STORY OF ANY WOMAN”
Music 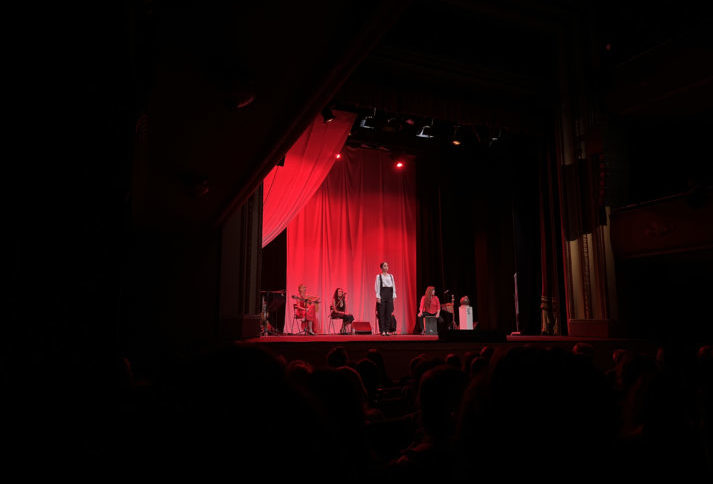 ETERNAS: ‘MUJER CREADORA’ AT TEATRE TALIA: “THIS COULD BE THE STORY OF ANY WOMAN”

On Tuesday 11th October, Teatre Talia welcomed ‘Eternas’ to the stage to perform ‘Mujer Creadora’, a story that shines a light on womanhood and the growing pains one must endure in reaching maturity whilst existing within a patriarchal society.

The all-flamenco ensemble is comprised of Helena Feenstra on the guitar, Selene Fernández as the dancer, Pau Martí playing percussion and Pilar Pacheco and Merci Gálvez on vocals. Formed in October 2018, ‘Eternas’ came together to carve out their own path as women on the flamenco scene. Joining them for this performance are Yessica Sanchez, Andrea, Isa Lauzara, Lucia and Coral de los Alegrías and Yol.

Walking into ‘Teatre Talia’, I perched myself at the end of a very-full row of theatregoers and took in my surroundings. Young, old, male and female, everyone sat with bated breath as the lights dimmed and the beginning of the show was announced

A single guitar strum reverberated through the auditorium as the lights came up and the scene of a mother holding her new-born child was revealed. Rocking back and forth, holding the baby close to her chest, surrounded by the other ‘Eternas’, Pilar Pacheco begins to sing. Her voice is strong and raspy yet tinged with a sadness of knowing what is to come for a baby girl born into a world that is simply not built to accommodate softness. Next to her, Merci Gálvez stands and sings to the child in a crisp and bold voice, commanding the room. Together they create a symphony that both celebrates the birth of a child and mourns the inevitability of pain.

Selene Fernández is captivating as ‘Mujer Creadora’, a strong vessel through which the story of growth is told. She dances with the depth and emotion of someone who has experienced life a hundred times over and yet she is embodies the innocence of a young woman tentatively stumbling through adolescence.

In one scene, Selene stands in front of a single mirror which is covered in a sheet of fabric. In contrast to the dark colours she previously wore, this scene shows her in a white dress with her hair hanging loose around her shoulders. A woman in her most private and vulnerable moment. She uncovers the mirror and at the same time the mirror uncovers her, showing her all the parts of herself she must come to terms with. As she moves around the stage, pushing the mirror away from her, pulling it towards her, shying away from her own reflection, leaning in a classic damsel-in-distress pose at the side of the stage, it is hard not to feel a certain helplessness. Around her, the voices of Pilar and Merci soar into an emotional melody that seems to perfectly capture the feeling of looking in the mirror and not quite understanding the person that is looking back at you. This is a scene that many unfortunately know all too well, before even reaching maturity we are taught to scrutinize every inch of ourselves, picking apart our very being until we no longer resemble who we once were.

Female solidarity is a strong theme throughout this piece, not only in the story itself, in the way a young woman learns how to exist and grow with her female counterparts, but also in the way the story is told by ‘Eternas’ themselves. They exist as one on the stage, encouraging each other with warm smiles, nods of approval and exclamations of ‘¡Órale!’ and ‘¡Anda!’ as they each display their unique talents. At one point Helena plays a sombre guitar solo and the ‘Eternas’ look on awe, clapping to the rhythm, nodding, swaying, expressing in every way that they feel what she is communicating. You can almost see her confidence grow with the knowledge that she has the support of her fellow group. No one is fighting for the opportunity to be front and centre, yet they all somehow manage to steal the spotlight.

It is abundantly apparent that the women of ‘Eternas’ really care for each other. At times, the intimacy of the bond they have formed is so profound that you feel as though you have stumbled into their own private rehearsal. This bond becomes the driving force behind their ability to be emotionally vulnerable on stage and in turn evoke a full spectrum of emotions in their audience. Intense happiness for the journey that this young woman is taking can quickly be transformed into intense sadness for her turmoil.

Towards the end of her journey Selene learns what it means to be to be a woman existing amongst other women in a patriarchal society. Yessica Sanchez joins her on stage as the two bring out chairs that face away from each other. The energy is cold as one chair faces towards the stage and the other towards the members of ‘Eternas’. They begin to mirror each other in a dance that is almost aggressive and competitive, the women seem to be fighting the outdo one another. However, half-way through there is a switch and, in a moment of tenderness, you can almost see the wall that each woman had built being taken down brick by brick until there is nothing between them but an understanding that they are not fighting against each other but rather they are fighting alongside one another. Once this is realised, the story of ‘Mujer Creadora’ takes a different turn. The women are unified, dancing around one another with the carefree confidence that comes with knowing you are not being judged for simply existing.

After just over an hour and a half of bearing their souls to the audience, ‘Eternas’ and the performers who joined them take the stage for their final bow. From the young talent of Lucia and Coral de los Alegrías to the women of ‘Eternas’, females of all walks of life stand in a line on stage, grinning from ear to ear, taking in an applause that shows no signs of quieting down. It is a moment where the message of ‘Mujer Creadora’ is really brought home. To grow as a woman is to learn the importance of solidarity, to feel the sense of fulfilment and community that can be achieved when we stand together.