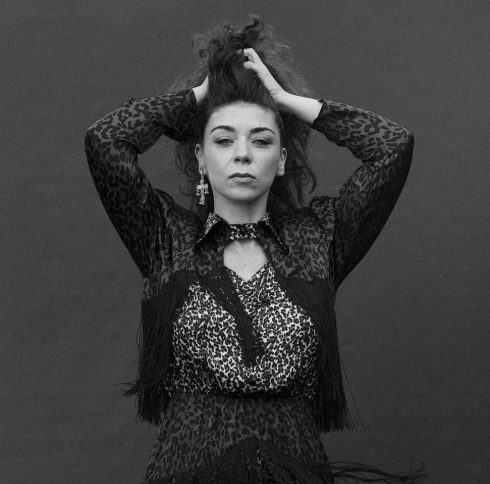 ##24/7 VALENCIA: Can you tell us about growing up in Huelva (Andalusia) and later moving to Madrid as a professional musician?

SANDRA CARRASCO: Huelva is where I was born and grew up and I’m proud to be from there, I still have a great affection for the place and the people. There’s a warmth and friendliness there and a sense of hospitality too… even more so within your close circle of friends and family. I remember neighbours visiting each other in their slippers…to say hello or to lend each other a cup of salt. Family and friendship is everything there and it’s a welcoming environment but it has its limits too and disadvantages. In Huelva, Andalusia becomes everything and it is sort of closed to the outside world to a certain extent. Growing up in a village-like atmosphere has its good points and not such positive ones… but Madrid opened up the whole world to me. It’s more urban and a more European city in its mentality. It’s more individualistic. It’s a city that has helped me to grow as a person and as a musician. On the other hand, it’s such a big and sprawling city that you have to plan 3 days ahead if you want to meet up with friends on the other side of town…

Could you tell our readers more about your travels?
Via Madrid, it’s because of my involvement with music that I have been fortunate to travel around the world. I still haven’t been to Japan and Brazil but I would definitely like to visit them in the future. Yes, I have played in the United States and South America and Eastern Europe and United Emirates and it was quite an experience. Travelling to other countries is a wonderful way to learn about other languages & cultures & their cuisine and the different ways of doing and seeing things too. In Guatemala, I remember doing singing classes (clases de canto) for disadvantaged children. When a tasty cake was presented on a large dish during the lesson, they didn’t act like spoilt European children of the same age and go rushing towards it… they left it untouched and they all waited until the end of the lesson to taste it and also made sure between them that everyone shared it properly and every child had an equal slice too. Those sweet memories are things that stay with you.

What was your experience regarding working with sitarist & composer Anoushka Shankar?
As you know, she is the daughter of Ravi Shankar so the music is in her blood. I spent 3 years touring the world with her. She then invited me to stay with her in India for about three months, which was a different way of experiencing such a fascinating country and India is my favourite place, the one that has touched me the most. When you live or visit another country with someone who is actually part of that culture, the experience is going to be richer. Of all the places I have been to, it’s the purest place I’ve been to… “lo mas puro.” After what I saw and felt in India, coming back to live in Madrid seemed almost “decorativa” and a somewhat empty way of life for a while…

Musically, I found working with Anoushka to be demanding. Her disciplined approach, due to her classical Indian music training & philosophy, meant that she insisted that i never stray from whatever it was that we were trying to present. The music and the presentation and rhythm had to be precise and correct and exactly the same each time. In Flamenco, I’m somebody who cannot present a song the same way …more than 3 times… with its tradition of improvisation…so it was difficult for me but you always learn something from rigorous experiences.

What was your experience of working with the legendary double-bassist Avishai Cohen?
Very special. I first worked with the Israeli musician Avishai Cohen on an early album of mine. He was playing double bass on a ‘seguiriya’ and he then suddenly started to improvise on it… and it ended up being quite a long, fluid and really memorable track. Later, he invited me to play at ‘L’Olympia de Paris’ and it was a really great show…musically speaking… and enjoyable too. The evening before, we had all gone to a restaurant in Paris and I sang a ‘fandango’ to Cohen, which had him in tears… it was an emotional and beautiful moment.

What are your memories of doing the ‘Oceano’ album with Cuban pianist Chuchito Valdés and Spanish double bassist Javier Colina?
To this very day, it is the most fun I have had making an album. It was a very organic process. We rehearsed the selection of songs for five days and then recorded it live at ‘Estudios Cata’ in Madrid. The idea of doing this fusion album was from our superb producer, Julio Martí. He had seen me sing a ‘bolero’ live and, after the show, he suggested we could work on something that fused flamenco with Cuban and jazz elements. At the time, i was with ‘Warner Records’ so the resources were there to get the top notch musicians to match the sound and vision of the album. The Cuban pianist & arranger Chuchito Valdés was an inspiration in the studio and Javier Colina on double bass too. A wonderful friendship with Javier started and has lasted since recording that very special album. We had the late, great Jerry González on trumpet too. Everyday, the musicians would have memorable stories to tell at the end of each session and we had some great times together.

What you have learnt from your work in the world of Dance & Theatre with productions like ‘Flamenco Hoy’ by Carlos Saura?
If you find the right people to work with in this field, it improves you and makes you a better person and more disciplined too. It’s a very physical experience. From my teachers in contemporary dance, I have learnt how to look after myself better, to eat well, to stretch, to meditate and yoga helps with all of this too. I gave up tobacco because of doing these ‘Dance Projects’ and now just vape. In Dance, I have also learnt that the ‘bailaor’ dances to what you sing…and not the other way round!

Please tell us about some of the artists who have inspired you in flamenco…
There is a ‘buleria’ by ‘Canalejas de Puerto Real’ that always fascinated me and I’m still investigating & interpreting his songs to this day. I also love ‘Marchena’ and the sweetnees and intelligence of his voice. He was a maestro and a virtuoso. His “melisma” was really distinctive, which is “an expressive vocal phrase or passage consisting of several notes sung to one syllable.”

What is the concept behind your most recent album, ‘La Luz del Entendimiento’
It’s a very natural album, in collaboration with the producer & composer Pedro Ojesto. It started out as a television programme as a homage to the great women from the world of flamenco like La Niña de Los Peines and Carmen Linares, who features on the studio album version. It includes piano by Pedro and also musicians from the ‘Flamenco Jazz’ company.

At ’Teatre Talia’ you will be presenting a new show called ‘El Belingonero Flamenco.’ Please explain something more about it…
This show involves rescuing forgotten or lost songs of Marchena and Canalejas. It’s a concept developed by my husband and guitarist Paco Cruz. He has played on many African albums so I have heard a lot of African music in the house. He recorded with the late African singer ‘Bidinte’ from Guinea-Bissau and who used to live in Madrid. It’s a fusion album of sorts. The copla of Spain has a purity about it and we all come from Mother Africa in the end…so this show is like a bridge between Africa and Spain. The album is due out in 2021.

Has becoming a mother changed your outlook on life and work and music?
Yes, absolutely! You lose the fear of everything…except worrying about your child. Working in music as a mother, you become more grounded. It’s a question of getting on with the show and giving it your absolute best…knowing that the money you earn will be providing for your child.