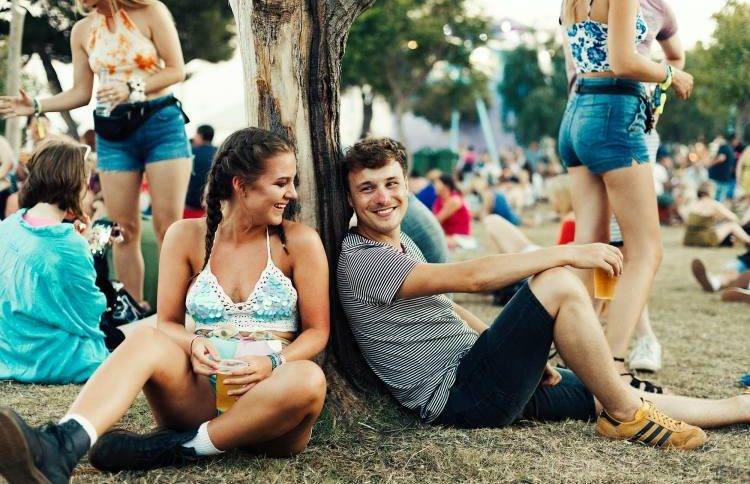 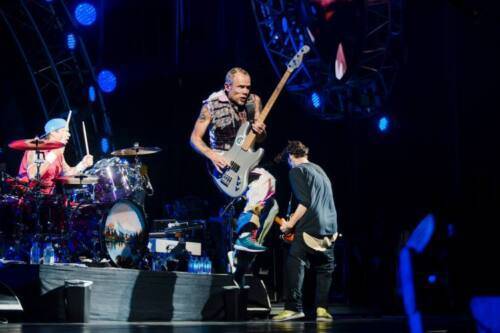 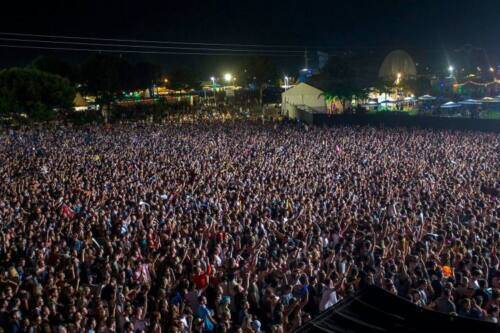 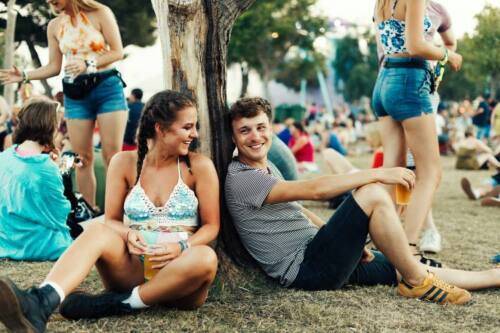 If someone asked you if you would like to spend a weekend living in abject squalor and inescapable heat whilst being surrounded on all sides by drunken strangers, there are few of us out there who would jump at the opportunity.

However, this year around 150,000 people opted to gleefully immerse themselves in the aforementioned cauldron of misery and one of them was me.

I had only previously been to one music festival and it wasn’t what you would call roaring success.

I spent a weekend in the summer of 2009 stumbling around a clutch of fields in the Derbyshire Peak District at a festival called ‘Y Not’.

These days ‘Y Not’ attracts some big names (Snoop Dog, Madness and Basement Jaxx have all performed in recent years) but the year that I went the line-up was a mish-mash of little known and completely unknown bands and the weather was even worse.

By the Saturday morning, after weeks of torrential rain coupled with the frantic toing and froing of giddy festival-goers, the campsite and its environs resembled a city that had recently been hit by the full force of an unstoppable tsunami.

Mud and the detritus left behind in the wake of thousands of revellers abounded.  In some areas your legs were lost to the cloying sludge leaving you stranded and vulnerable amongst the empty beer cans and discarded burger boxes.

My personal festival experience was cut short after an incident, which occurred on the Saturday evening.

Waiting in the driving rain for the night’s headline act I was struck on the head by an unopened can of cider which, in the opinion of its owner, was of much more use as a long range missile than a refreshing drink.

I was taken to the hospital by an exhausted-looking paramedic and had my head glued back together before traipsing back to the campsite, my head bandaged like Terry Butcher circa 1989.

The following day, as the mist cleared once more on the squelchy squalor, I called my mother and asked her to come and pluck me from my mud-dunked nightmare.

I clambered into the car, head throbbing and caked in mud – much to my father’s chagrin – and promised myself that I would never go to another festival again.

So, given what had gone before, when I found myself erecting my tent on the campsite of Benicàssim’s FIB festival, unsuccessfully attempting to hammer tent pegs into rock hard ground, I was more than a little bit concerned about the potential trajectory of the weekend.

It started well enough; we were housed under a canvas canopy which took a little of the sting out of the ferocity of the sun and next to a group of Irish lads whose accents were trustworthy enough for us to feel comfortable about leaving our belongings in our tent whilst me and my girlfriend headed to the beach.

Once positioned on the pebbly shore we toasted to the beginning of our weekend with cold cans bought from illegal vendors and my ‘Y Not’ ordeal seemed a million miles away, the two of us pinned in the firm and warm grip of anticipation.

The following morning, however, the misery of that experience eight years previously came into sharp focus as I crouched next to the fence that bordered our campsite and vomited uncontrollably whilst my fellow campers lay in drunken stupors.

Maybe I just wasn’t cut out for festivals.

The previous night we had enjoyed the contrasting musical offerings of Stormzy, The Weekend and Bonobo and had finished the festivities by indulging in large bowls of sticky Bangkok rice from one of the many food stalls inside the arena.

It was this rice that, a matter of hours later, caused a rebellion from my insides and left me shaken, sapped of energy and yearning for the comfort of my bed.

After my tenth short but hurried trip from the humid confines of my tent to the fence to attempt to purge myself of the demons that were waging a war on the insides, my concerned girlfriend suggested making a trip to the medical tent.

On the long and slow walk from basecamp to the medics I blended into the crowds of pale, staggering people all suffering in one way or another from the exertions of the previous day, although I remember thinking that none looked as desperate as I felt.

Mere yards from our destination, I summoned just enough energy to deviate from the dusty path, strewn with stones, to take refuge behind a bin and release another stream of stomach bile.

My throat burning and my mouth coated with an all-too-familiar bitterness I laboured the final metres towards the medic tent and pleaded for help.

Mercifully the ethereal, halo wearing medics injected with an antiemetic and sent on my way.  Only time would tell if I could salvage my weekend from the wreckage of food poisoning.

I spent the day drifting in and out of consciousness on the same pebbled beach which had been the scene of such excitement the previous day, unable to eat or drink anything for fear of waking the demons that, thankfully, after my injection, lay dormant in my gut.

Heading to bed that night I was happy to be feeling more like the human being that had been absent that morning but disappointed that my weekend had thus far failed to reach the heady heights I had been hoping for.  I lay down and prayed for normality to be restored the following day.

A quick diagnostic check on Saturday morning informed me that my body, whilst still a long way from normality, seemed more willing to allow me to enjoy the experience of the festival and the timing couldn’t have been better.

That night’s line-up promised much; Liam Gallagher, Red Hot Chili Peppers and Biffy Clyro offered me the opportunity to make up for lost time.

Whilst I had been nil by mouth the previous day, our Irish neighbours had been steadily making a dent in the Valencian region’s beer supplies and the limited space between our tents was a carpet of mangled aluminium.

My heart was warmed when they expressed concern for my well-being and happiness when I told them I was feeling better but my face flushed when they informed me that they had been awoken the previous morning by the sound of my violent retching.

Along with a trio of affable Scots, we planned to drink together that evening before heading in to see the bands.

First up Liam Gallagher spent a little over an hour snarling into the microphone, his set was punctuated with Oasis classics and finished with Wonderwall, much to the delight of the loud Manchester contingent present in the swelling crowd at the Las Palmas stage.

After a brief interval during which the hoarse crowd swarmed en masse to the pop-up bars in need of refreshment, Red Hot Chilli Peppers took to the stage.

Having formed in 1983 and with a combined age of 200 the four-piece have had plenty of time to hone their live performances and it showed.

To quote a worn out cliché, the band had the crowd eating out of the palm of their hand and, amid the flurry of drum solos, the hypnotic dynamism of Flea on bass and the effortless puppetry of Anthony Kiedis, the band were forgiven for omitting classics such as Scar Tissue and Can’t Stop from their set.

By the end of the performance all thoughts of vomit, injections and the scorching squalor had been banished from my mind; I wouldn’t say anything as mawkish as to suggest that the music healed me but it certainly seemed to help.

Biffy Clyro had the unenviable task of following RHCP, something that they did admirably and with great energy, carving themselves into the packed narrative of the evening.

The English, Irish and Scots headed back to their respective tents having successfully managed to spend the whole evening together by utilising a simple yet effective arms-aloft method to avoid being separated among the sprawling mass of people.

The power of a festival to bind people together cannot be underestimated.  Previous to that evening the only exposure our Gaelic neighbours had had to me and Emily had been to borrow our mallet in order to unsuccessfully attempt to force their tent pegs into the solid earth and the sound of my retching that filtered through the nylon walls of their tents.

The following morning we were friends and I type this article opposite an Irish flag hung on my wall; exchanged with a promise to meet up again next year on that same despicable campsite.

When Monday came and it was time to dismantle our tents, say goodbye to our new found friends and head for reality, we felt a pang of sadness at having to leave.

Despite a dreadful start to the weekend I had developed a warped affection for the routine I was in, the desperate foulness of the campsite and even the ants which scuttled across it in armies.

When we finally arrived home it seemed peculiar not to have to trudge through a sea of litter in order to get anywhere.

The strange thing about festivals, in my experience, is your inability to fully appreciate their uniqueness whilst you are there.

Even after the incident with the alcoholic missile many years ago I look back with fairly fond memories of a weekend spent with friends and the same is true of Benicassim.

I had been on the brink of calling it a day, such was the pit of Thai-induced sickness I found myself in, but as I lay down in a clean bed in a cool bedroom and replayed all of the other things that had happened, both before and after that forgettable episode and I longed to be return.

The brilliance of your weekend is not fully revealed until you leave and with the clarity of hindsight you are able to sift through the slough of events that have occurred and view individual moments with renewed enthusiasm.

It seems sad that it takes the relief of leaving ramshackle toilet facilities and communal showers to appreciate the experience, by which time it has passed you by in a flurry of empty beer cans and soiled tents.

Benicàssim, see you next year.