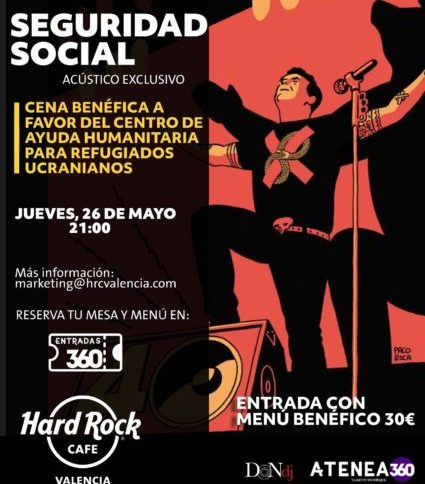 – The legendary band ‘Seguridad Social’ will offer an exclusive acoustic concert at Hard Rock Cafe Valencia.
– Guests will be able to enjoy a charity menu created especially for this purpose and thus contribute directly to help the Ukrainian refugees, since 100% of the profits will be donated to the Juntos por la Vida Foundation, which will use these funds to purchase basic necessities that will be managed directly at its centre in Llíria, the largest humanitarian aid centre in the Valencian Community.

This Thursday, May 26, Hard Rock Cafe Valencia will host an acoustic concert by the legendary band ‘Seguridad Social’. José Manuel Casañ accompanied by guitarist Javi Vela will offer a unique concert where you can listen live to a selection of their greatest hits. You can enjoy a dinner with a charity menu whose benefits will go to the ‘Juntos por la Vida Foundation’ for the purchase of basic necessities and their subsequent distribution for the humanitarian aid center for Ukrainian refugees located in Llíria.

This is the largest humanitarian aid center for refugees in the Valencian Community. The project is led by the Valencian businessman Juan Manuel Baixauli, in support of the Juntos Por
la Vida Foundation, and with the business collaboration of the Sanz Group. The aid warehouse aims to supply the refugee who arrives in Valencia with the essentials items. Refugees who
have arrived in the Comunitat, have emergency needs and identify themselves as displaced Ukrainians can collect the aid. In addition to the centre, deliveries have been made to
apartments where there are Ukrainians who have no resources.

The ticket to the charity event and concert of Seguridad Social include a solidarity menu with classics of Hard Rock Cafe cuisine. Its price is 30 euros, and it can be purchased thanks to the
collaborating company ATENEA 360, through its web page ENTRADAS 360 https://entradas360.com/

Another collaborator of the event is Don DJ, who will be in charge of the technical-musical part of the event. All the benefits will go to the cause.

In the words of the CEO of Food and Moments Group, David Carmona, he emphasizes: ” It is of the utmost importance that we all look in the same direction and do our bit to help an
extremely vulnerable group, such as refugees from Ukraine, the majority of whom are single women and children. In addition, it is very gratifying to have the disinterested participation of
an artist with such a high level trajectory as Seguridad Social.”

For his part, Juan Manuel Baixauli, founder of the Ukrainian refugee assistance centre, adds “the objective has been to join the efforts of companies and Valencian society in general, in
order to – through the foundation Juntos por la vida – try to give the greatest support to all the hundreds of Ukrainian refugees who have arrived in our community without resources and in a
complicated situation. Hard Rock Cafe Valencia’s initiative to continue supporting this work is one more step in the commitment we all have to help them overcome this situation.”

Hard Rock International (HRI) is one of the most globally recognized companies with venues in
68 countries spanning 253 locations that include owned/licensed or managed Hotels, Casinos,
Rock Shops®, Live Performance Venues and Cafes. HRI also launched a joint venture named
Hard Rock Digital in 2020, an online sportsbook, retail sportsbook and internet gaming
platform. Beginning with an Eric Clapton guitar, Hard Rock owns the world’s largest and most
valuable collection of authentic music memorabilia at more than 86,000 pieces, which are
displayed at its locations around the globe. In 2021, Hard Rock was honored as one of Forbes
Magazine’s Best Employers for Diversity, a Top Employer for Women and the Top Employer in
the Travel & Leisure, Gaming, and Entertainment Industry. Hard Rock was also designated as a
U.S. Best Managed Company by Deloitte Private and The Wall Street Journal and named the
top performing hotel brand in J.D. Power’s North America Hotel Guest Satisfaction Study for
the third consecutive year in 2021. The brand is owned by HRI parent entity The Seminole
Tribe of Florida. For more information on Hard Rock International, visit www.hardrock.com or
shop.hardrock.com. 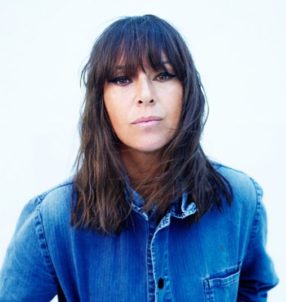