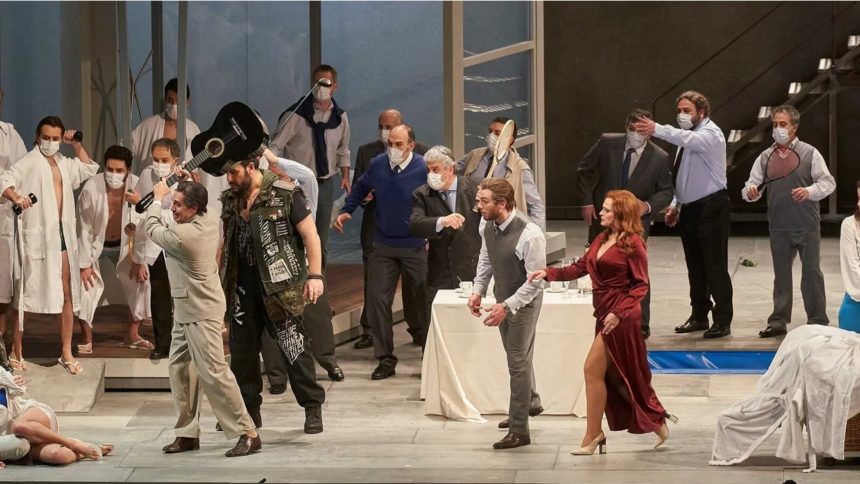 – Les Arts presents Verdi’s last opera in a staging by Mario Martone for the Berlin Staatsoper, which moves the action to a contemporary metropolis.- Ainhoa Arteta, Violeta Urmana, Davide Luciano and Sara Blanch perform, alongside Maestri, the main roles in the cast.

On March 2nd Tuesday, the Palau de les Arts (Valencia) will premiere Verdi’s ‘Falstaff’, with Ambrogio Maestri in the leading role under the musical direction of Daniele Rustioni. The rising conductor from Milan makes his debut with the Cor de la Generalitat and the Orquestra de la Comunitat Valenciana, with the last opera written by Giuseppe Verdi and still unpublished for the audience of Les Arts.

On the verge of turning 80, the composer from Busseto culminated his prolific career with a complex and extremely demanding score for orchestra, singers and conductor. Rustioni, with extensive experience in the Italian repertoire and five productions of ‘Falstaff’ on his CV, stresses the difficulty involved in matching text and music in a score in which every note and every syllable has to be executed in the right way.

Les Arts presents Verdi’s twilight comedy in a production by Mario Martone for the Berlin Staatsoper, with set design by Margherita Palli, costumes by Ursula Patzak, lighting by Pasquale Mari and choreography by Raffaella Giordano and Anna Redi. Martone’s proposal moves the action to the present day, in a great metropolis, with its graffiti, disreputable clubs and anachronistic characters.

Sir John Falstaff becomes a rebellious spirit, faithful to his leather jacket and sideburns, who grows old spending his time in a kind of community centre along with turbulent characters.

The Sala Principal of Les Arts will host four performances of Verdi’s ‘Falstaff’ on the 2nd, 7th, 11th and 14th of March.

Les Arts reminds that it scrupulously complies with the regulations of the health authorities to guarantee the safety of the public in all its performances. In addition to taking temperatures and the obligatory use of masks, the authorised personnel ensure that the appropriate distance between people is maintained, as well as controlled access to and evacuation of the hall to avoid crowds.
In addition to these measures, other measures include the restricted use of toilets and lifts, different points with hydroalcoholic gel dispensers, together with the permanent 24-hour air renewal and daily disinfection with authorised biocidal products.

The theatre management also asks the public to plan their arrival sufficiently in advance to ensure smooth access to the theatre.