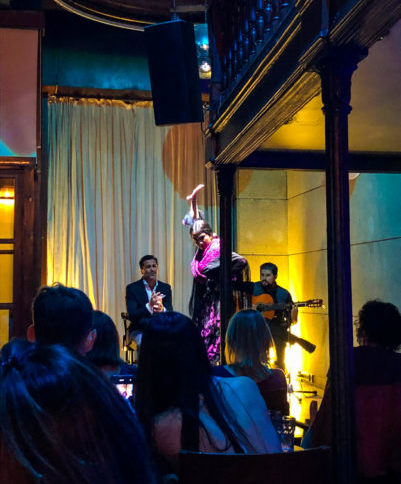 #Vibrant, sophisticated and intimate are three words that best describe our Saturday evening spent at La Linterna’s flamenco event. A range of unique talent was on display at the event, with singing from the revered ‘David Carpio Jerezano’, classical guitar by ‘Manuel Valencia’, and dancing from ‘Irene Sorribes’, this was certainly a night to remember.

Located in the very centre of Valencia just a stone’s throw away from Mercat Central, the exterior of the venue has a sophisticated and authentic design, with a mature decorative style and large curtains obscuring the view in, leaving what exists inside up to the imagination.

We enter and take our seats, watching for the performance to start. The venue is very intimate, and there couldn’t have been more than 50 people in attendance. The audience were mostly friends and family members congregating and catching up, La Linterna seeming to be a weekly occurrence or tradition for them. After ten minutes of enthused chatter and laughter, people began to settle into their seats, eagerly awaiting the night’s performers to take to the stage.

This event was headlined by David Carpio, a suave and esteemed singer of the flamenco style. He exuded an majestic and mysterious persona, and performed with the upmost seriousness and respect for his craft. His character is best reflected by this excerpt from his website, which states “he has fought in a thousand battles and served with artistic projects as his weapons, which have demanded and shaped him in a special way.” He has played all styles, with strange neatness, but without losing the echo that defines him.

Alongside Carpio was guitarist Manuel Valencia, who displayed an impressive and varied performance throughout the night, sometimes playing with ferocity at a rapid pace and at other times playing with a soft elegance, perfectly accompanying the energy presented by the vocals.

During one of the duo’s final songs, local Valencian flamenco dancer Irene Sorribes strutted up to the stage and began to dance. Her intensity and sophistication was infectious and radiated through the impassioned crowd, resulting in cheers of ‘Olé!’ and ‘Otra, Otra!’. The night was bought to a crescendo by her appearance, and just as quickly as she appeared on stage, she was gone. Then the duo on stage both took a bow, finally acknowledging the appreciation shown from the crowd after the hour of professionalism and pure focus demonstrated on stage.

The chatter and laughter of the delighted crowd returned as audience members reunited with each other to discuss the show, and most probably to plan their return to La Linterna’s flamenco night the following Saturday.