You are here: Home  /  Food  /  THE EMBLEMATIC ‘MERCADO CENTRAL’ OF VALENCIA
Food 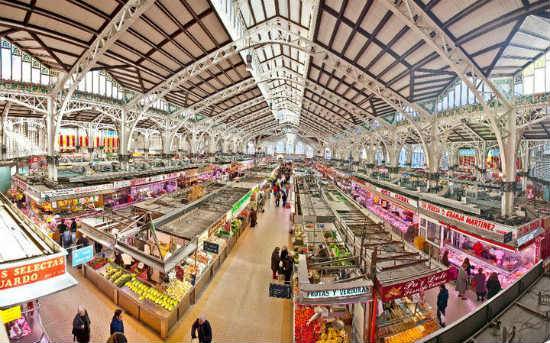 Valencia’s Central Market is one of the largest markets in Europe!

Perched high above the ornate iron and glass dome, it’s feet resting on a golden ball, is the Cotorra del Mercat, the big green parrot that is the symbol of the Mercado Central in Valencia. Cotorra means parrot in Spanish, but it also means chatterbox, and the weather vane is meant to represent the chatter and bustle of the business taking place fifty metres below its feet – although some local wags suggest that it’s more representative of the gossiping stall-holders.

Built between 1914 and 1928, Valencia’s Central Market is one of the largest markets in Europe, covering an area of over eight thousand square metres. A market has been held in the same place since the thirteenth century, and the beautiful stained glass and tile building now standing on the site is an excellent example of Modernista style of architecture.

Circling the outside, ferreterias selling paellas (the shallow pan from which the rice dish gets its name) ranging in size from the smallest one-person portion to the vast extended family affairs, are inter-spaced with stands where you can enjoy a tapas or a glass of fresh orange juice. Inside, the cast-iron framework towering over the multicoloured stalls is reminiscent of a huge Victorian railway station. The central dome is decorated with stained glass oranges and lemons, representing the typical produce of the Valencian region.

The building’s ornate design was the conception of Alejandro Soler and Francesc Guárdia, but it was a modern-day Soler, Beatriz, who unravelled the mysteries of the Mercado for me. Valencia born-and-bred, her tour became more than the usual professional guide’s recitation of supposedly interesting facts and figures, as she chatted with the stall holders and explained to me their suggestions on how a slithering anguila (a small freshwater eel) should be cooked, the best way to bake a skinned lamb’s head, or which beans to use in a paella as the seasons change.

The mercado is divided into sections for different produce. First stop was the fish market, where the long chrome stalls are packed with ice and the vivid presentation of everything fishy resembles a carefully laid out floral display. Each type of underwater delicacy is separated. Fat white pulpi won’t be found snuggling up to shimmering salmon or deep purple slices of fresh tuna, and garish red languostines disdain the company of percebes, the grotesque molluscs that look like a tiny severed elephant’s leg –  supposedly delicious, but I’d need to have my eyes closed to get it anywhere near my mouth.

The idea of telling you the best way to cook something is pretty nifty sales technique; if you don’t know how to handle something you probably won’t buy it, but to find out that all you need to do to create a pescadorial perfection is to drop a few shellfish in a pan with a little oil, add garlic, a small chopped onion and a sprinkle of salt and let the crustacea release its own liquid to create the sauce – beats having to dig out the Spanish cookbook. And if the chap standing behind the mounds of mejillones explains that the clochinas might be smaller, but they are typical Valenciano and much, much better, he’s not only adding to your culinary experience but he’s also going to be a few pesetas  better off, because they’re also a bit more expensive.

On the perimeter of the fish market are the offal stalls…a strange combination, but this is also the case in the central market in Athens. For anyone not used to seeing more than a couple of nicely laid out kidneys, or a few slices of lamb’s liver, these offal stalls are a revelation – and not necessarily a pretty one. There’s an old saying that you can use every part of a pig except the squeal, and the saying comes true in the displays laid out before you. Trotters from the tiniest itsy-bitsy piglets range upwards to those removed from something that would have scared the living daylights out of you if you’d come face-to-face with it on a walk through the forest. Severed heads glare sightlessly at you, surrounded by trays of chopped up compadres – snout’s, ears, cheeks, and if you really have a taste for the obscure, you can buy the head completely de-boned and laid out flat like some plasitc pig’s mask in a joke shop.

In the vegetable arena, tiny stalls selling only varieties of beans used in paella do a roaring trade next to those piled high with sparkling, water-sprinkled lettuces. Many of the lettuces come from Alberic, a small town in the vicinity of Valencia which hosts an annual Dia del Lechuga. Prizes are awarded for the biggest lettuces and visitors wander the streets eating fresh lettuce pieces from paper cones. Hielo Rosa (Pink Ice) and Hielo Verde (Green Ice), two lettuces that look like chunks of coral, vie for brilliance with the bags of paprika on the stall next door. Herbalists will prepare you a potion and the vendors of dried fish (for some reason tucked among the vegetables and not alongside their fresh counterparts) will explain that the local delicacy of air-dried pulpi is obtained by hanging the freshly caught version from a thin washing line, and it will take two days to dry if the weather is fine, three if there’s a hint of rain in the air.

If your fancy is for dried meat instead of dried fish, there’s plenty of choice of Jamón Serrano, Jamón Recebo, from pigs fed on a mixed diet, is the cheapest, but if you want the real McCoy, Jamón Ibérico, from pigs which have supposedly dined on nothing other than fallen bellotas (acorns) from the holm oak (but which usually supplement these with scavenging for lizards, snails, slugs and insects), then you’ll pay a lot more. If you really want to pay an arm and a leg for the back leg of a pig (paleta is the front leg) go for pata negra, the black pig for which you’ll practically have to take out a small mortgage.

And if all you want to do is be mesmerised one of the best markets in Europe, then you need look no further than Valencia.

They are online too and if you live in the vicinity of the city you can shop online and have market fresh produce delivered to your door, visit their website:
https://www.mercadocentralvalencia.es/ 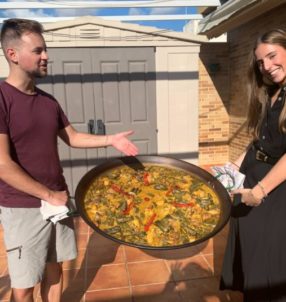