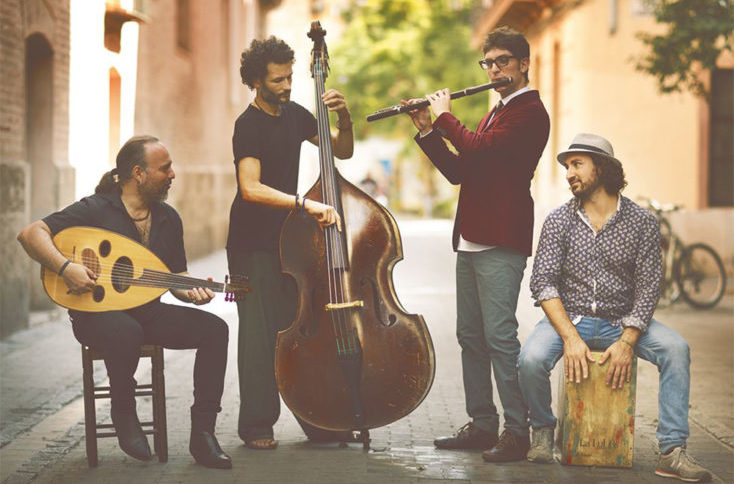 Andrés Belmonte of Tariq: My trip starts in Valencia, arrives in Cairo via Istanbul and then rests in Valencia once again. On this ‘Tariq’ road appears ‘El Henna’ & ‘Hobbi’, which are compositions by Mohamed Abdel Wahab, a colossus of the golden age of Egyptian music in the 20th century. They are themes that were originally played by the classical Arabic orchestra of the time and it has been an interesting challenge to arrange & adapt them for this quartet.

‘Hobbi’ in particular is a piece which I fell in love with musically and that I learnt via an Egyptian musician in Crete, Hazem Shaheen. He is the author of ‘Rehla’, a song that I played with him in Cairo. Here I play a taqsim with the Arabic ney during the intro. In the ‘Tariq’ theme I wanted to convey the joy I experienced on this trip through the Mediterranean and I do it with a ‘gnawa’ rhythm.

‘Abu el Arabi’ is a fictional character in the Egyptian imagination that I came across in a documentary; it is my way of reflecting humour as it is in Egypt. ‘Terra’, on the other hand, is a song written to listen to the beauty of the oud as a solo instrument, the composition is based on a kind of “Maqam Kurd” (musical mode) that appears in traditional Valencian music as well as in Turkish music.

‘El Caire’ is my humble tribute to this great city; here I picked up melodies from my teacher Mohamed Fouda, the “Maqam Bayati”, a favourite of the legendary Egyptian singer Umm Kalzum. You can hear the “Khaliji” Saudian rhythm that I heard in the casino of Cairo.

‘Lahen Tayyah’ is an Andalusian “Samai” that I learnt thanks to Efrén Lopez, a ballad in 10/8 time, which is typical of Turkish and Arabic music. I have done nothing but let the simplicity and beauty of melody and rhythm speak for themselves.

As for ‘Zar’, it is a theme based on an exorcism ritual performed by Nubian women in Egypt that is played with flute and percussion. To finish the album I decided to perform with the Turkish Ney and voice for ‘Cant de batre’ in the traditional Valencian approach or in the traditional Turkish or Arabic way…

Click on link for a medley of ‘Tariq’
https://www.youtube.com/watch?v=NKrJaQag52U&feature=youtu.be&fbclid=IwAR0QkhY6wu_O34lv1KJ6b1ZZS-lWCWvGxPIw6N6H7EzGXrfYocQN2syCw0c