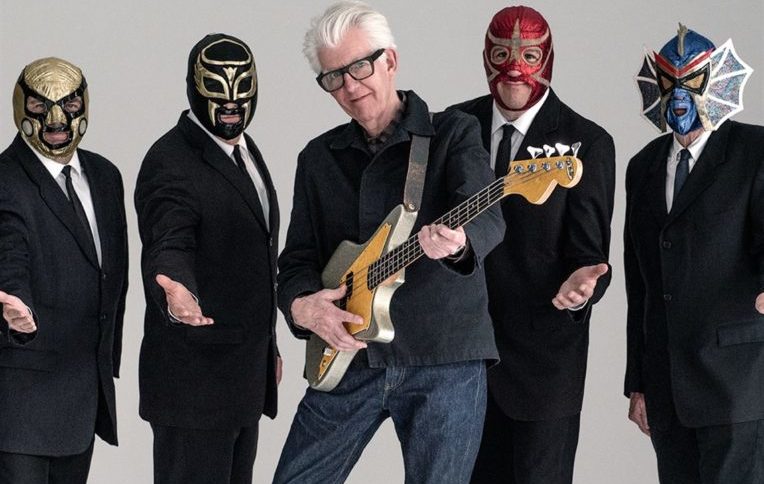 Nick Lowe and Americans Los Straitjackets began touring together following the live performance of Nick Lowe’s Christmas album “Quality Street. A Seasonal Selection For All Family” (2013), which took place in 2014 and for which he took Los Straitjackets as a backing band. That tour was later represented on the live album “The Quality Holiday Revue”. Since then they have gone on to release the single “Tokyo Bay/Crying Inside”, the Ep “Love Starvation”, the live album “Live at Haw River Ballroom”, “Lay it on me”, “Walkabout”, “A Quiet Place” and their most recent release “Winter Wonderland/Let it Snow” (2020).

Nick Lowe’s more than forty-year career is a real paradox: his songs are better known than he is himself. Frivolously, the Englishman acknowledges that many people think that “(What’s So Funny ‘Bout) Peace, Love and Understanding” is by Elvis Costello, and that many fans have attributed his version of “The Beast in Me”, composed by his father-in-law Johnny Cash, as his own. Nick Lowe was married to Carlene Carter, Johnny Cash’s stepdaughter, settling in Nashville and composing and recording with and for the great Johnny Cash.

However, at 73 years of age, when many of his peers are content to live on “past reputations”, Nick is enjoying a second chance on stage in a very special way. His album “The Old Magic” confirmed this.

Lowe’s beginnings date back to the late 1960s. He started in 1969 in the band Brinsley Schwarz, where he began playing country and blues-rock, which he left in 1974. He then began playing bass in Rock Pile with Dave Edmunds, with whom he recorded “Seconds of Pleasure” in 1980, which included Lowe songs such as “When I write the book” and “Heart”. His songwriting and production work made him an original “purveyor”  for the likes of Elvis Costello, Kursaal Flyers, Dr. Feelgood, Graham Parker, Clover, The Damned and Wreckless Eric. Their debut album came in ’78 with the title Jesus of Cool, renamed in the US as Pure Pop for Now People.

Nick Lowe, a master of pop and a leading figure in the British music industry, as a producer for Stiff Records, and in addition to his records as a performer, was a major influence on the new wave and punk of the late 1970s. Now, after a prolific 40-year career, he has reinvented himself with his “Old Magic”, where he reflects all the country and rhythm and blues he drank from his childhood.

As a solo artist, after being expelled from United Artists, he recorded the masterpiece Jesus of Cool on Radar Records, a subsidiary and emblem of Stiff Records, followed by Labour of Lust with the wonderful song “Cruel to be kind” and combining his work with that of production, The Pretenders and his future wife, Cash’s stepdaughter, Carlene Carter.

In the 80s, he continued producing for The Fabulous Thunderbirds, John Hiatt, Elvis Costello, Paul Carrack or Carlene Carter, and incorporating a lot of alcohol into his life! In 1988 he released “Pinker and Prouder than previous”, another turn of the screw towards his beginnings, more rock and roll. From that moment on, massive success and cult following, great collaborations, Dave Edmunds, and phenomenal reviews on the vast majority of his records, and allowing himself the luxury of forming a super band with Ry Cooder, John Hiatt and Jim Keltner called Little Village.

The Godfather of Mexican Surf, Los Straitjackets, also with Latin ancestry, are a true institution in terms of Surf and instrumental Rock & Roll fun in North America, always moving on independent circuits.

On the American West Coast, ‘Los Straitjacekts’ are really loved, their last album “Jet Set”  was a huge hit especially in cities like Los Angeles, San Diego or San Francisco, there is no party that can resist this album of 15 tunes of surf Rock and Roll, Twist, garage, Reggae and instrumental beat.