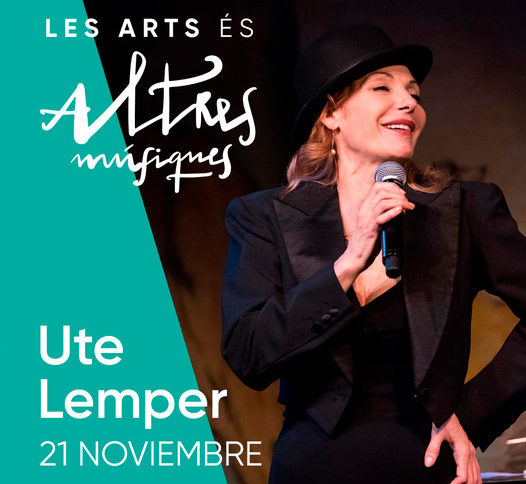 The name Ute Lemper leaves no one indifferent. She has been on stage for three decades, since she started performing at a very young age in small jazz clubs, and is the one who has maintained the essence of the Berlin cabaret of the twenties and thirties of the last century. The career of the German singer and actress is impressive, recognised internationally and justly awarded too. Her work includes jazz, musicals – Cabaret, Chicago, Cats -, the French songs that immortalised Edith Piaf or Jacques Brel, and, above all, the German repertoire of Brecht, Weill or Holländer…without forgetting the songs that made famous one of her sources of inspiration: Marlene Dietrich. Accompanied by her instrumental ensemble, Ute Lemper transports the audience to those stories of love and misunderstandings, social and political criticism, and cabaret nights.

24/7 VALENCIA: COULD YOU TELL US MORE ABOUT YOUR NEW ALBUM AND SHOW, ‘RENDEZVOUS WITH MARLENE’?

UTE LEMPER: “It all started with a 3 hour conversation i had with Marlene Dietrich on the telephone, at her request. She poured her heart out to me and told me of her joys and sorrows, her lovers… who were both men and women, growing up in Germany and then working in Hollywood in America. She didn’t see that her having always been anti-Nazi was such a difficult stance to have taken, given what the Nazis stood for. She was saddened that, after the Second World War, she was never really accepted by her homeland of Germany and she felt that there were those who still saw her as some sort of traitor. For the last ten years of her life, she had become tired of the image of “being Marlene Dietrich” and she cut herself off from society and became pretty much a recluse for that period…living in her flat in Paris.”

24/7 VALENCIA: YOU ALSO LIVED IN PARIS AND ‘CHANSON’ IS VERY MUCH PART OF YOUR REPERTOIRE. WHAT DOES THE CAPITAL OF FRANCE MEAN TO Y0U?

UTE LEMPER: “I love Paris and there is a part of my heart that is always longing to go back there. For me, Paris is style and architecture and poetry and chanson and existentialism! It has an amazing vibe.”

24/7 VALENCIA: HOW DID YOU FIND WORKING IN THE WEST END, IN LONDON?

UTE LEMPER: “I was so happy, as a German, to have been welcomed so warmly by the British theatre community! I worked with Michael Nyman too, which was a wonderful experience from an artistic point of view. For someone from my country to win a ‘Laurence Olivier’ award (for her role in ‘Chicago’) was amazing! It was the 1990s. My feeling is that for a German to win that award in Britain was, at the time, perhaps unheard of. As a place to live and work, London is so diverse. It’s a very special city.”

UTE LEMPER: “After living in London, I moved to New York to work on Broadway and that was over 25 years ago! I am based in New York (Manhattan) and have brought up my four children here. New York is progressive, it’s a “free space.”