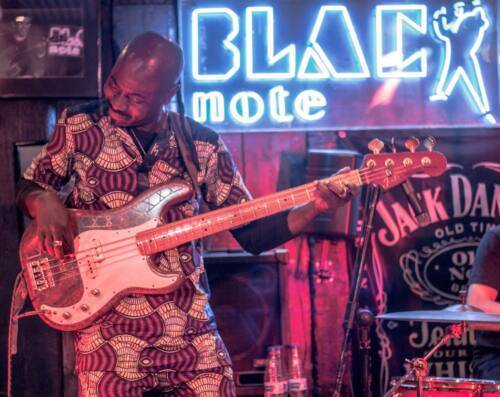 Kuami Mensah was a Valencian based musician with a truly international vision. Originally from Benin, Africa, he settled in Valencia, Spain. He collected a stellar cast of musicians from Valencia and Benin for his ‘Minon M’zon’ album. It is nearly 70 minutes long, with 15 songs and the beautiful booklet has translations in English, Spanish, German, French, Portuguese and Japanese! It is great value for money. The production, design and musicianship is excellent.  Booming Afro-reggae bass, on-the-money funk guitar and impressive jazz trumpet are just some of the ingredients. Plenty of time changes, very catchy choruses and virtuoso percussion provide a solid undercarriage for the many themes of Kuami’s album. These include topics like the homeless Africans who sleep in the local river-bed, not judging others,  Africa’s need to take a look at itself, Africa’s need to unite, fighting exploitative wages, the joys of ‘getting it on’, life and death and more. Kuami’s father, a renowned musician in Europe and Africa, passed away from cancer. This album is a tribute to his memory and the idea that life and death are part of the same. One love…

24/7 Valencia: What brought to you Valencia and what do you think about it?

Kuami Mensah: My first thought to that question is to remember that I chose to study physics and chemistry instead of Spanish at school in Africa! So, with that in mind I can say that life naturally brought me to Spain and especially Valencia.

24/7 Valencia: Tell us about your music…

Kuami Mensah: My music is an authentic mix of influences. I was born in Benin, Africa, and my father Gnonnas Pedro was a Latin Salsa musician (former leader and singer of the Pan African band called ‘Africando’). I sing in Benin and other African languages and Reggae music gives me hope. Therefore what I do is ‘AfroLatinReggae’ music…

24/7 Valencia: Have you played many concerts in Spain and abroad?

Kuami Mensah:I have played many concerts in Valencia, around Spain and some in Europe, including festivals in France and Italy. Like I have said before: “Every concert I do is a lesson and I am an eternal student. I always think I’m just beginning my professional life and I have much to still do.”

Kuami Mensah: Generally, I never choose what I want to sing about but quite often naturally my inspirations come from fighting the system. I sing for justice, to fight against injustice in this world and I sing for the respect of Africa. After slavery, colonization and independence I cannot understand why Africa is living in shame. I sing for humanity not to be corrupted. I know it is difficult but I will still try to give my best through my music.

24/7 Valencia: Could you explain what your ‘Afro Latin Reggae Hwendo’ album is about?

Kuami Mensah: I have added more Afro-Latin influences to emphasize the origin of American and Cuban music today. We all know that Africa is the beginning of it all and this album is my way to make the world remember the slaves and I say “May we start a day to pay homage in the memory of the slaves every year.” I pay a tribute to my musician father Gnonnas Pedro from Benin, to Lluis Llach from Spain and to Abdel Halim Hafez from Egypt with songs by them both. The arranger of the album is Cuban trombonist Julio Montalvo.  There is also a track featuring the legendary French/Spanish singer  Sergent Garcia, who is based in Valencia.

24/7 Valencia: How do you try and help people with your music?

Kuami Mensah: Life for me doesn’t make sense if I can’t find a moment for everybody… whether they are black, brown, white or yellow. What is most important for me is what a person does for humanity. I just try to do my best with my music and I hope I’ll be able to always do my best. I think it is the same for all of us, in whatever we do. ‘24/7 Valencia’ is a magazine that has always fought for Valencia and we appreciate your help over the years. Good health to you and your loved ones!