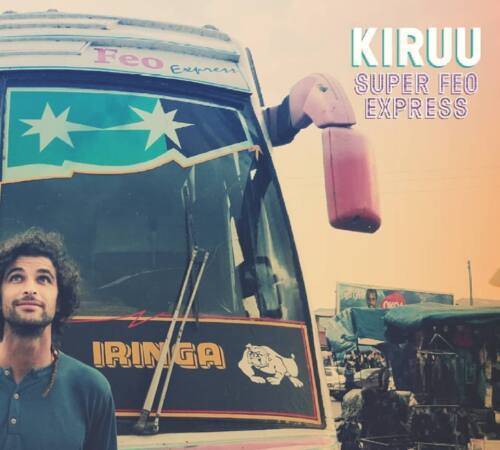 24/7 Valencia: Tell us something about your background, travels and experiences…
Kiruu: Originally of Irish-English origin, I grew up between Tanzania and Kenya. I’ve also lived and worked in Valencia in Spain, Argentina, France, and travelling widely around the globe. These experiences have coloured my music with styles and languages that form an integral part of my sound. My first band ‘TSTI’ was formed when I lived in the UK between 2000-2004. Upon leaving, I travelled the world, playing in Brazil, Australia, and East Africa, before settling back in Ireland in 2005. I set up a new band in Ireland called the ‘Caracoles’. Moving to Spain first in 2006 for a brief period and then in 2009, different bands were set up, including ‘Baobab Interactive Music’. During my time in Valencia, music and work projects took me to Argentina, Tanzania and France. In Valencia, I also formed ‘Kyriana’, a duo with a Mexican jazz singer named Mariana Rodriguez, and played with ‘The Life Lovers Band’.

What is the concept of your new album, ‘Super Feo Express’?
‘Super Feo Express’ is the culmination of 15 years composing, performing, and collaborating in bands and musical projects on 4 continents. It was recorded at Hellfire Studios, Dublin, over a period of 3 years. The album features a host of musicians who are mostly based in and around Dublin but who hail from Ireland, Spain, Peru, Brazil, Congo and Northern Ireland. Some of them will play with me for the launch. Jazz musicians Cote Calmet (drums) and Barry Donohue (upright and electric bass) provided the solid rhythm section on 10 of the 11 tracks. Other musicians came up to do sessions for different tracks depending on what was needed. The concept comes from the album cover and photo. It is a bus I took in Tanzania in 2012. I grew up in East Africa and have lived in 7 countries around the world and I’m now based back in my native Ireland. This album is quite literally the musical journey I took so far. Each place I lived, I picked up different influences and styles. The album follows in the footsteps of Manu Chao and Paul Simon, and belongs to the “World Fusion” genre. Its tracks explore a variety of genres and styles through the medium of different languages, namely English, Spanish, Swahili with sprinklings of French and Irish as well.

Could you take us through each track?

Sunrise Sunset: This is a trip hop/jazz offering which was written in response to the (then) hopeful Arab Spring, 15-M and Occupy movements, and it also focuses on the environment. I was living in Valencia at the time, and I was playing around with different chord voicings and came up with a simple two chord sequence which I fitted with a rising, harmonising melody. Instead of varying the chords I varied the rhythm in the chorus, combining rumba with a kind of trip-hoppy “rap” part.

Sikupendi: Despite being quite upbeat and jumping between reggae and raga with a slow Afro-Beat feel, it is actually about domestic violence. I wrote the song in 2012 in Tanzania. The 8 chord sequence remains constant through different rhythmic changes between 3 different beats. It is sung in Swahili and what makes the track for me is the beautiful guitar work of Ireland-based Congolese jazz master Niwel Tsumbu.

Tibet is the oldest song on the album, and holds the flag for the ska genre. (Although the chorus changes into reggae). I wrote it in 2008 in response the political unrest in Tibet. It is an anthem for activism and protest. I am particularly proud of the offbeat synth I added, which really brings the track alive, and the lovely trumpet and sax harmonies which accompany the bridge.

Nyumbani is the Swahili song on the Super Feo Express. Nyumbani means “Home”. This song covers the theme of belonging and looking for home that many people feel in the globalised world.

Equinox: The quintessential Kiruu track, Equinox swaps between 3 genres and is sung in 3 languages (English, Swahili, and Spanish). It is a big, fun track, with a brassy boisterous intro leading through a swing/manouche style bridge into a more intimate, thoughtful chorus.

Grapes in Tupiza: This is only song on the album that might be seen as a “love song”. Although it is really just a “crush song”. It is a swing/folky number with a soaring trumpet solo and is loads of fun. This track was written in Valencia in 2013 when I was hanging with a number of jazz and swing musicians, in particular Gus Orihuela (the fabulous Bolivian violinist) with whom I collaborated in a band we called “Los Irregulares”.

Fading Pain: The most energetic track on the album. Fading Pain was written in 2008 while I was playing with a Dublin based band called ‘Caracoles’. It is a mesh of thumping rumba and swing and will get you off your feet and gyrating. It is about recovery and recuperation after illness.

Éter is the only song sung only in Spanish. It is a slow rumba rhythm which also has a strong jazz influence in the chorus chord sequences. It explores the tricky theme of the myth of individualism and how interconnected and interdependent we are.

Dance: Sung in English & French & Spanish, ‘Dance’ was my shot at making a song that had a Cabaret-type feel. It has a waltz rhythm which is piano driven, and includes a wind section. It is, of course, all about the beautiful thing that is dancing.

Síocháinis an Irish word meaning “Peace”. This song features the Bodhrán, a traditional Irish instrument, and the Lambeg Drum from Northern Ireland. Musically, I attempted to make it sound like an Irish ‘reel’ of sorts. The theme of the song is peace and reconciliation and it was written in response to the “Centenary” celebrations in 2016.

Shivani is the slowest and most thoughtful track on Super Feo Express. It was written in 2013 after the Islamist group Al-Shabaab attacked a shopping centre in Nairobi and killed all non-Muslims in an attempt to polarise Kenyan society, where different tribes and religions attempt to live together in peace. Shivani was an unborn child whose pregnant mother was one of the victims. This song is a lament for her and other children who are killed in adult wars.

Can we see you play in Valencia again? I hope to do an album launch in Valencia in the future…

How did you find living in Valencia compared to Dublin?They are very different places. Valencia is probably my favourite city in the world. It is the perfect size, on the coast, and I also really like the different cultural hubs, and the fact that it isn’t all concentrated in the middle. Dublin is great, a lot bigger and spread out. It is very green, and while it takes a while to get around, it has a village type feel and everyone knows each other. It is more expensive than Valencia, but there seems to be better pay and more opportunities.