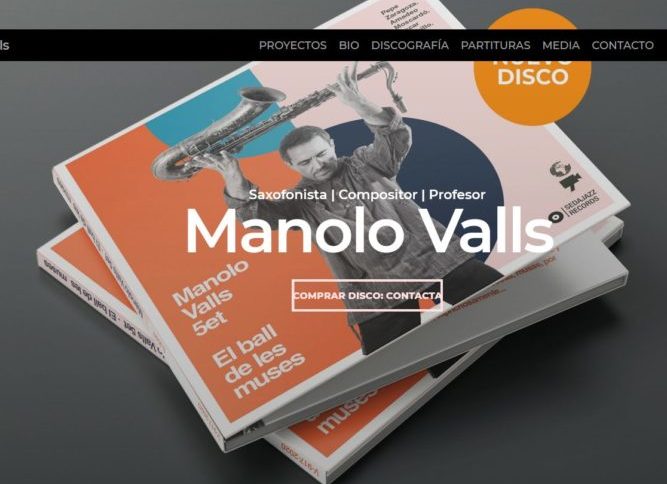 24/7 VALENCIA:Tell us something about your musical training and education…

MANOLO VALLS: I started my musical training very young at the Musical Casino of Godella, my town, but the teaching methods of the time were not very suitable for young children and did not do you any favours if you really loved music. However, my musical passion was awakened during music classes at my elementary school. I had a very good teacher who made us play popular songs of the time on the recorder. The contact with the music was much more direct. Later, I continued to study classical music and saxophone in different conservatories. I joined the band of my local town and at the age of 16, I started to study jazz in some modern music schools in Valencia and also in a self-taught way. At that same age, I decided to become a professional musician and started playing in orchestras of dance and groups of different styles including jazz, rock, fusion, flamenco.

I left the orchestra a long time ago, but I have continued to play and form different groups until today. For almost 20 years I have also been teaching music in music schools and conservatories and, since 2013, I’ve been running the Big Band Casino Musical of Godella.

24/7 VALENCIA: What attracted you to the saxophone?
I wanted to play the trumpet, which was the instrument I knew best (I have two older brothers who already played it) but my mother advised me to play the saxophone. As I also liked its sound… I was fine with that decision.

24/7 VALENCIA: What is jazz to you? Does Mediterranean music share the same spirit?
Jazz is a way of making music that is based on a certain language (although very diversified) and with great importance attached to improvisation. It originated in the United States, but today it is totally universal. For me it’s the way to express myself with music that I like the most, and that I enjoy the most. I enjoy it so much because I can create, which is what I am passionate about. I can create via composing but also improvising other people’s songs. You have much more freedom than with other music.

I don’t know if Mediterranean music shares the same spirit. What I do believe is that all music that you have learned and lived can be reflected in your particular way of doing jazz or composing. Your influences and your musical culture usually come out somewhere, usually unconsciously.

24/7 VALENCIA:Can you tell us about the concept of your award-winning album, ‘El Ball de Les Muses’?
I don’t make music with a specific concept. It’s more like I’m trying to write the music I hear in my head. Usually, I shape it as it comes out. It’s always a bit of a magical process for me. That explains the title of the album, the muses that inspire you to create.

24/7 VALENCIA:Tell us a little bit about each song

Spiderman
-The melody is inspired by ‘A Love Supreme’ by John Coltrane (some pentatonic motifs in the first section), although the character of the theme has nothing to do with it. It’s a hardbop theme with a touch of the blues. I don’t know why he reminded me of Spider-Man, the favourite character of my son Angel. Mind you, it sounds to me like a slightly neglected, 40-year-old Spider-Man but a wise one.

Song for Naima
I composed the bass line and harmony first, and then the melody. Analyzing it in hindsight, I found out that formally it’s kind of a blues bridge, although harmonically it’s not exactly that. The mysterious air of the song reminded me of the music we used to make with the Valencian group ‘Naima’, and that’s why I dedicated it to them and to the years we played together.

Xickets
It’s a simple, happy tune, like a child’s tune. The way the title is written is a game that mixes Valencian and English. It reminds me of my kids playing.

Esperanza
It’s a minor blues. The introduction symbolizes a dawn. The bass line is based on Equinox, by Coltrane, although the melody has a very different air, more pop. The theme I composed was inspired by a rhythmic motif of the English saxophonist, Nubya Garcia, whom I saw a certain physical resemblance to Esperanza Espalding. The theme was eventually transformed and of that rhythmic motif only the origin remains of the title.

Va de blues
Theme composed from a very simple (but very direct) melody that came out spontaneously of my saxophone. Technically, it’s not a blues but it has a totally bluesy character.

El ball de les muses
It has two parts. The first part is a ballad, which was originally a different subject. It’s nostalgic. It ends more or less unexpectedly to link with the second part, in 7/8. This part I composed from the rhythm of the bass. The theme and its harmony seems to have some sort of influence from flamenco music, although not in a very explicit way.

Kalakati
It’s a very strange subject. It was born that way, I liked it, and that’s how it stayed. ‘Kalakati’ is a word without meaning (as far as I know) that my son Daniel used when he was a baby.

24/7 VALENCIA: How do you find Valencia as a place to live from music?
It is very difficult, not to say impossible, to live just by playing, unless you have a fixed place in some public group (municipal band, Valencia orchestra, etc). Most musicians I know, they also teach classes so they can live. And of course, you must play all over Spain or outside to make a living and under minimal conditions.

I think in Valencia there is a great paradox in terms of music: there are many musicians, but not too much musical culture regarding the general public. Perhaps because it is so abundant, music is not valued or supported enough, neither by the institutions nor by the general public.

There is a lot of “free” music and many people play instruments. This is all very well, but it should not be confused with being a professional musician, which has more artistic responsibility and the need for specific spaces to develop. Also there is the need for an audience, who don’t mind paying a fair price to see a performance, and thus facilitates that artists can continue to develop their art.

24/7 VALENCIA: What are your plans?
To win the lottery, to stop teaching 6 hours a day and dedicate myself to my family, to play and compose. But I don’t usually buy lottery tickets. So, being more realistic, I want to make my music known via my compositions. That’s why I record albums. Currently I want to promote my latest work, ‘El ball de les muses’ and try to play live throughout Spain (or abroad) …the more gigs, the better. I enjoy (and learn) playing with the great musicians and colleagues who accompany me in my quintet: Pepe Zaragoza (trumpet), Amadeo Moscardó (piano), Oscar Cuchillo (double bass) and Rubén Díaz (drums).

Before the situation created by the coronavirus, we had three set performances. All the concerts were postponed except when we officially presented ‘El ball de les muses’, at the Godella Jazz Festival, ‘Gothejazz’ a fair while back. I hope that soon it will be soon be back to normal regarding live music but with more decent conditions for all musicians on the scene.