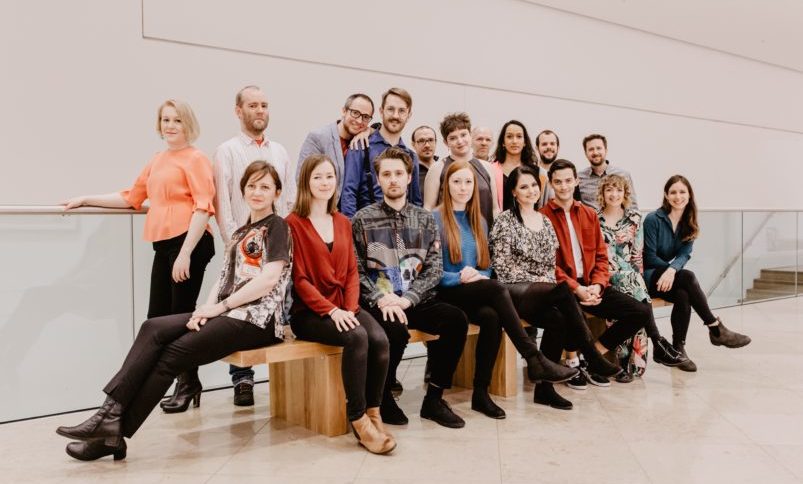 24/7 VALENCIA: What are the origins & influences of ‘Riot Ensemble’?

AARON HOLLOWAY-NAHUM: I was a founding member of ‘Riot Ensemble’ (alongside Kate Walter, Adam Swayne, and Claudia Racovicean – who are all still members of the Artistic Board) when I was at Guildhall, in 2009. It really just started as a bunch of friends putting on concerts and having fun. Nobody was paid. We had no idea what we were doing, just finding music we wanted to play and enjoying rehearsing together and performing it.

In 2012 we had the chance to give a professional performance at LSO St. Luke’s, and on the back of that raised the money for our first full season. Then on the back of that raised a bit more for our next season. And just built the ensemble step-by-step like that. And ‘who’ the ensemble was grew like that too. In one concert we’d be a soloist in a hospital. In another we were 35 people on a concert stage. And through the years certain players returned again and again, and eventually gravitated toward the centre of the work. Eventually we formed an artistic board made up of these people, who also took on running, programming, marketing and fundraising for the ensemble.

At the beginning this was one of the hardest things to understand about us. People would ask: who is Riot? What is Riot? But it wasn’t (and isn’t) one thing. It’s not one stylistic viewpoint, and it isn’t one person’s vision of new music. Every Artist on our board (and there are now 21) brings their own origin story and influences into the very heart of the group and our work. That’s so important, right now, because new music has never been more eclectic. If Riot was just ‘Aaron Holloway-Nahum’s vision of new music’ it would be so, so much poorer.

Could you describe each of your ‘Riot Ensemble’ albums?

Approaching Dutilleux: Built out of one of our earliest projects (Henri Dutilleux’s Les Citations for Oboe, Percussion, Harpsichord and Double Bass). We commissioned a number of other pieces for this exact lineup, and then around our first performance, we organised a single day of recording (before the concert). So this CD is almost entirely the live performance, with little fixes and drop-ins from the day before, and it shows all this eclecticism I was talking about. Drew Schnurr right next to Jenna Lyle. It really makes me smile.

Chest of Toys: then, was an incredibly ambitious project. We programmed a concert in London based on this wild array of music we wanted to record, every piece having a different instrumentation, style, point. And we booked Real World Studios (Peter Gabriel’s studio outside Bath, England) for the weekend following our concert. And we drove all night after the concert to get there and then just moved in. (The venue is idyllic really, set in the countryside, and there’s a chef on site and you all eat your meals together). Actually this was a really hard album too. Members of the ensemble were really struggling with some personal things and by the end of this we were all exhausted, but much, much closer as a group. It’s still one of my favourite things we’ve ever made.

Speak, Be Silent was probably the first ‘mature’ album ‘Riot Ensemble’ made. We did this one in another amazing venue (Air Studios, London) and it was built up around the Liza Lim violin concerto (Speak, Be Silent). Liza has been such an important composer/mentor to Riot. She has been publicly so supportive, and then privately so careful, wise and candid with us in her guidance and ideas and observations. I was just thrilled we were able to put down this amazing piece, and to place it amongst these other universes created by composers who ranged from absolute masters (Chaya, Rebecca) to the emerging (Mirela, Anna). This is also so important to the way we programme: we want there to be a repertoire of the best pieces from the greatest composers, and for those pieces to have a wide and varied life amongst ensembles. Meanwhile, we want the next generation of composers to be placed right there on the same stage.

Song Offerings was maybe even another step forward, in that it was a big international co-production with Coviello Classics and Deutschlandfunk Cologne. The CD was made in the wake of Brexit, and so it has this kind of reflective quality on the question of what British song is. The centrepiece is Jonathan Harvey’s Song Offerings. Many people consider Jonathan to be the greatest English composer of the last 50 years – and I consider Song Offerings to be his very very best work. It is simply stunning. And this performance is something I’ll be proud of forever.

Is there an overall concept?

If you mean, to Riot Ensemble, then I think what I would say is actually no. The fact that there is NO house style, no genre, no “isms” concerts. That is at the heart of what we do. Aside from a rare portrait concert, or single-piece concert, you will never come to a Riot concert where we perform one piece of minimalism (or spectralism, or serialism, or whateverism) after another.

And, frankly, this is something I feel really strongly about: why would you do this any other way? In a day and age when we wring our hands about how we all live in bubbles and social-media echo chambers I just can’t understand programmes that take the position that one viewpoint reinforced by one piece after another is actually interesting.

What can the public expect from a show?

Well, the concert is built around a piece by Liza Lim (mentioned above) called Extinction Events and Dawn Chorus. It’s an extraordinary, far-reaching piece which takes everything I just mentioned about a concert and brings it into the form of a single work. The ensemble sings and plays kazoos, gets wrapped up and silenced by cellophane, and (along the way) plays some absolutely incredible passages of music inspired by themes of nostalgia, communication and extinction. We’ve heard a lot of reviews of people who were able to attend the UK Premiere we gave just before lockdown, and even people who didn’t love the work (and most really, really loved the work) have told us they’ll never forget that performance. It’s dramatic, and exciting, and very very important to the politics of our time. There will also be a new work and I want to be careful to be every bit as excited about this: we don’t know what to expect any more than the audience. We literally do not have the piece yet, and so we’ll be discovering it and making it between now and then.

It’s so hard to do this because I could write a Vanity Fair profile about each and every member of our ensemble. What I can tell you is that I love them. Each one, individually. They have each taught me so, so much about music and about being a part of our shared humanity in 2021. They are absolute wonders and it has been the greatest pleasure and honour of my career to work alongside them.