You are here: Home  /  Music  /  VALENCIA MUSIC…‘SCATTER THE ATOMS THAT REMAIN’ HAVE A NEW ALBUM OUT!
Music 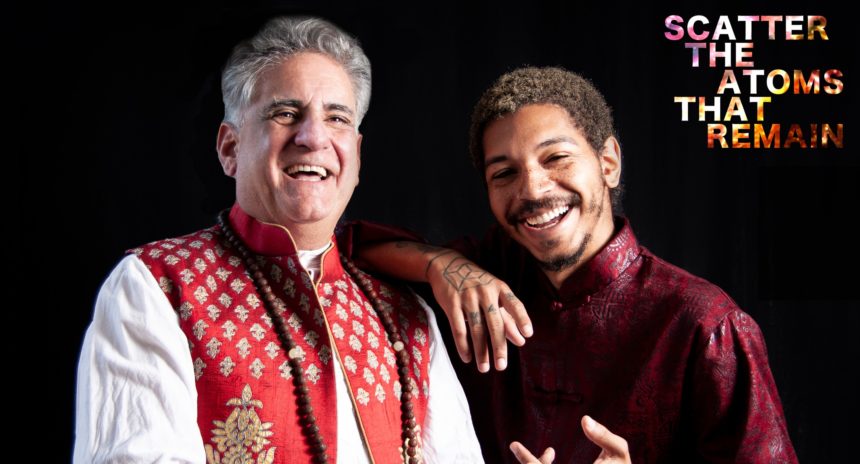 VALENCIA MUSIC…‘SCATTER THE ATOMS THAT REMAIN’ HAVE A NEW ALBUM OUT!

24/7 VALENCIA: COULD YOU TELL US SOMETHING ABOUT THE BACKGROUND OF ‘SCATTER THE ATOMS THAT REMAIN’?

FRANKLIN KIERMYER: I’ve been a student of the Tibetan version of Buddhism for many, many years. I’m lucky enough to have a teacher who is one of the senior Lamas who escaped from Tibet in the 1950s. His name is Khenpo Tsultrim Gyamtso Rinpoche.

He would teach his close students by including spontaneous songs of realization too. Before he sent me out to practice in charnel grounds where they burn dead bodies, one of the songs he sang to me related to the five senses and all perception: touch, hearing, sight, smell and taste.

Rinpoche sang: “You should take the big corpse of experience of the five senses and burn it in the realization of selflessness…then scatter the atoms that remain in the great expanse beyond thought.” That’s dharma and it was a ‘Eureka’ moment for me!

24/7 VALENCIA: WHAT IS THE CONCEPT OF THE BAND? Well, I have been playing in the band with the pianist Davis Whitfield since he was 22 years old, which is six or seven years now. We’d been developing the music under my name, initially, but Davis came up with the idea of marketing the music with a band name to make it more of a spiritual gathering of the tribes…

He is our pianist and also our musical director and he suggested that I should search for something that my Tibetan Lama had taught me. I went away and thought about it and came up with the name ‘Scatter the Atoms that Remain.’

24/7 VALENCIA: WHY? Because it’s the whole modus of how the music works…in the West you would say it’s trusting your intuition. To expand on that, the real deal is actually trusting your heart because that’s beyond content. Obviously, practice helps with dexterity too… but I think we’re getting more consumed by the spirit of the music.

24/7 VALENCIA: CAN YOU TELL US SOMETHING ABOUT YOUR NEW ALBUM, ‘EMANCIPATION SUITE’? It’s a limited edition of 100 vinyl copies with the first ten records signed by Davis and I. It was recorded in one take and is now available on our bandcamp site to download but is absolutely not on streaming services: https://scattertheatoms.bandcamp.com/

24/7 VALENCIA: WHO ARE YOUR MAIN INFLUENCES AS A DRUMMER? Clearly, as a drummer, it has to be Elvin Jones…far and away. I knew I would never be able to play like him but I felt that I could capture the spirit of it…if I went my own way…and I have dedicated my life to music. There’s other amazing drummers that I have learnt from like Jack DeJohnette, Roy Haynes, Gene Krupa…I love that stuff, man. As drummers, they all had a real vibe and feeling…which is something good musicians in a group are always going to respond to.

24/7 VALENCIA: HOW ABOUT SAXOPHONE PLAYERS? I’ve played with a lot of great sax players. I sought them out. Pharoah Sanders, who played with John Coltrane’s band, recorded an album with me called ‘Solomon’s daughter.’ Musically, it provided Pharoah the opportunity to go as far out as he could. That album was very well-received by ‘Rolling Stone’ magazine and more than just the jazz press. That was the beginning of me getting any kind of real notice.

I also learnt from playing with the sax player Steve Grossman…who was a Coltrane acolyte…and he recorded on a number of albums with Miles Davis and Elvin Jones.

I also recorded my album ‘Further’ with Azar Lawrence,  a sax player on the very influential McCoy Tyner records. Azar also played on the ‘Dark Magus’ album by Miles Davis too.  Azar was a West Coast cat from California and went to live in New York due to an invitation by the legendary Elvin Jones…whom he recorded with too.

24/7 VALENCIA: WHAT ARE YOUR OTHER MUSICAL INFLUENCES? I have Eastern European ancestry and I’m very influenced by Béla Bartók’s music and the romantic classical composers and by New Orleans music, African music, Balkan music, spiritual music, Sufi music including Qawwali and ritual indigenous Korean music too. Indeed, Indigenous music in general has really been a huge part of my upbringing and I heard it in the same religious spirit as the spiritual music of John Coltrane. Three albums he did in 1965 really stood out for me: ‘Transition’ ‘Sun Ship’ and ‘First Meditations.’ The John Coltrane Quartet broke up in that fall and I’m extremely influenced by those recordings. I recognize them as the pinnacle of spiritual music of our era. In my own way, via the music, I’m also trying to share that spirit. If you try to cater for everybody, you’re gonna have to cook McDonalds, which is not what I was put here to do.

24/7 VALENCIA: YOU ARE TOURING EUROPE AND THE UNITED STATES AT THE MOMENT. HOW DO YOU FIND THE AUDIENCES IN SPAIN? Wonderful! They’re Mediterranean so they’re not shy to express themselves, which i really appreciate. They’re also quiet during the songs and actually listening to the music. It’s so special. We’re communing and having a shared experience, which is the greatest part of what i do.

24/7 VALENCIA: HOW DOES LIVING IN NORWAY COMPARE TO LIVING IN THE UNITED STATES AS A MUSICIAN? I lived in New York for 20 years and I paid my dues, as they say. You arrive there thinking you can play the drums pretty good… until you start playing there! It’s tough and it’s like:“Oh shit!” I can play but I’m just beginning to learn! The bar is set high in New York and the vibe is real. Playing music in New York was very difficult as I wasn’t trying to be part of the scene. However, it was a wonderful experience too, as I was forging my own path perhaps without realizing it. I was very focused on what I was trying to do and, for example, Pharoah Sanders came to me as he recognized what I was trying to do and we recorded an album together. Pharoah told me that playing with John Coltrane had inspired him to practice music more and more from then on…and he saw him as his musical mentor.

I don’t function so much as a musician in Norway.  However, Norway does spend a lot of money on the arts and music and supports young musicians, which is wonderful. It’s difficult to explain though because, in a way, it’s also somewhat inward-looking. If you live in a country that’s always helping you and getting a pat on the back…you get a false sense of accomplishment.

24/7 VALENCIA: WHAT IS THE OBJECTIVE OF YOUR MUSIC? It’s all about perception and there is no goal except honesty and love. Success is not necessarily what we think it is. The journey and sharing love is what it is all about and connecting with the spirit through the music, which requires opening up. The more you can open up…the closer you are to the universal spirit, which unites us all. But it’s difficult! We’re all human!

24/7 VALENCIA: THANK YOU FOR YOUR TIME AND FOR A SUPERB CONCERT AT ‘ JIMMY GLASS’ IN VALENCIA…Great talking to you, man! Thank you!