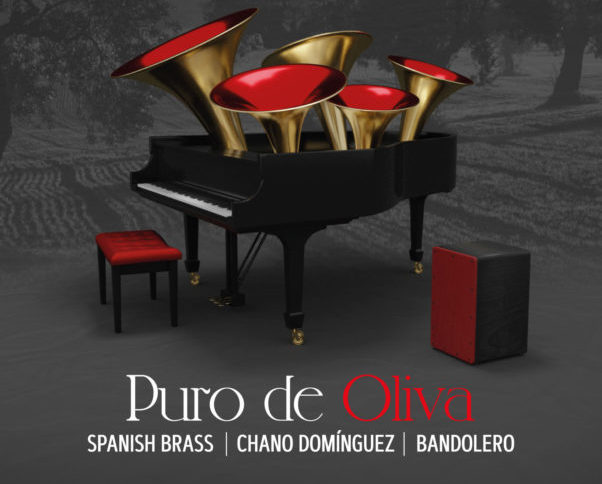 This project was born from a meeting between Spanish Brass and Chano Domínguez, who attended a concert by the quintet near Seattle. A magical connection emerged between the musicians that led them to decide to share creative experiences on stage and in the studio.

Chano has composed a new piece for brass quintet, piano and cajón fiamenco entitled “Never Settle for the Oyster Light.” The rest of the set-list includes other pieces by Chano including “Solo con verte,” “Mi Prima de Riesgo,” “De Cadi a New Orleans” and “Rumba Pa Jerry” that he composed for other artists such as Wynton Marsalis and Jerry González and has now arranged for Spanish Brass, piano and percussion. All of which makes this show, entitled ‘Puro de Oliva’, the perfect ambassador for the music and culture of Spain. A special guest artist is Bandolero or Pablo Domínguez on the “cajón flamenco.”

##Chano Domínguez
Chano Domínguez needs no introduction. He is one of the most celebrated jazz pianists and composers of our time. His work is defined by his flamenco origins. During a career spanning more than four decades, he has dazzled audiences of all kinds, including other musicians, spanning the worlds of jazz and flamenco equally. Internationally acclaimed, he has influenced and changed the history of flamenco and jazz.

In 2016 he was nominated for his 4th GRAMMY, this one a Latin GRAMMY for his latest release, “Bendito,” featuring Chano as producer, composer and pianist.
Chano has taught at Juilliard, the Taller de Músics in Barcelona, the Bogotá Conservatory, and the University of Washington School of Music, among other institutions.
Chano lives in New York City, where Sunnyside Records has just released his new solo album, “Over the Rainbow.”
www.chanodominguez.info

Spanish Brass
Spanish Brass (www.spanishbrass.com) is one of the most dynamic and admired brass groups on the international music scene. In 2017 the group received the I Bankia Music Talent Award in Spain, for the most influential musical artists, and In 2019, they have received the Auditori Espai Ter Award and two Carles Santos Awards.

They have participated in some of the most prestigious venues and festivals around the globe, as well as such keey moments as the gala award ceremony of the Principe de Asturias Prize, and recording the music for the play “La Fundación” by Buero Vallejo for the National Drama Center and the soundrack for the film “Descongélate” by Félix Sabroso for El Deseo Producers.
They have recorded 26 CDs, including a retrospective double CD and two CD-DVD, in which they demonstrate a multiplicity of styles and modes.

24/7 VALENCIA: Can you tell us something about the tradition of brass music in the Valencian Community?

SPANISH BRASS: Hello to the ‘24/7 Valencia’ team, we are pleased to greet you and take this opportunity to congratulate you on your 21st year in Valencia. Thank you for your magazine and your invitation to participate with this interview.

As is well known, the musical tradition in Valencia is rich and deep. We could say that it is an intrinsic part of our DNA as a society. But in particular, brass music, like wind instruments in general, is intimately linked to the musical societies and their bands that populate our Valencian Community, the backbone of any popular, religious or secular manifestation of any community. The bands of the Comunitat Valenciana should be World Heritage because they provide their environment with training, culture, entertainment and tradition among many other benefits.

Could you explain to us how “Spanish Brass” was formed and what the concept of the band is?

The concept formed in 1989 when all the members were part of the incipient Joven Orquesta Nacional de España (JONDE).

The 5 of us were members of the brass section of the orchestra and one day we decided to search the archive for some chamber music repertoire for brass, in order to have a good time.

Conceptually we wanted to follow in the footsteps of pioneering groups such as the American Brass Quintet, The Philip Jones Brass Ensemble or The Canadian Brass.

We listened to those vinyl records with real passion and being able to play that demanding repertoire was very rewarding as well as challenging.

Since that year, we never stopped playing together and although we became professional musicians in different orchestras and conservatories in Spain, we always wanted to make the brass quintet our way of life.

After winning a prestigious competition in France that specialized in the subject, we thought it was time to take the step and in 1997 we decided to leave our jobs to make the obsessive dream that had been chasing us since the first day we started playing together come true. From that moment on, all our energy and talent combined together to reach this moment as one of the very few groups in the world that are 100% dedicated to Chamber Music.

What have you learned in your travels abroad about people and different cultures?

That is one of the most enriching parts of our work; to date we have played in over 50 countries. These experiences allow you to form yourself as a human being beyond the music itself, but if it is with it everything is easier because there are no limits to expression and getting to know people and places, it provides fundamental keys to understanding how close we could be to each other despite the frontiers we strive to set.

Well, the answer to that question at this delicate time is more a wish than a descriptive question. Until 2019 we were averaging about 100 concerts per year, which means spending a lot of time on the road and at airports. By 2020, perhaps we would arrive with the maturity and prestige of having a thirty-year career with exciting prospects. Unfortunately the current situation has truncated, we hope momentarily, that line of growth we were following. Two tours in the United States, one in Japan and two in Europe were cancelled. We are still struggling to catch up but hopeful.

Tell us something about your discography and your awards…

Our first album was recorded in 1996, after winning the Narbonne competition. It was part of the award along with a 6-concert tour of some of the most important venues in Europe. We arrive at 2020 with 26 albums of our own production and preparing the next one in the near future.

In terms of awards, we are very proud to have received the Bankia Award for Musical Talent in the Valencian Community in its first edition in 2017.

2019 was also fruitful in this respect as L’Espai Ter in Torroella de Montgrí in Girona awarded our project “Mira si hem corregut terres” and a few months later here in Valencia, we were awarded the prize for the two nominations for best traditional music album, on the one hand, and classical music on the other hand… in the Carles Santos awards of the IVC.

The immediate future, not having problems going to rehearsals tomorrow, that good health returns to humanity on planet earth and that culture and music are as necessary for society as it is for the spirit. We know it sounds like wishful thinking but, in reality, that’s the plan.

Can we see you playing in Valencia soon?

We have been touring Andalusia, Jaen, Granada, Huelva, and Seville. In Valencia we have performed several concerts after the health alarm, the first was in Alzira, a city we love very much because it has been the home of our SBALZ festival (Alzira) for 18 years and we are very grateful to its City Hall and citizens for having us present even in these very complex times that society is going through in all its aspects.Here is a link to the concert held at the Teatre Principal de València, in the summer of 2020, of our participation in the festival Poliritmia, presenting our concert “Mira si hem corregut terres” with SPANISH BRASS and Carles Dènia https://apuntmedia.es/va/a-la-carta/retransmissions/spanish-brass-carles-denia

Could you tell us about your recent album?

‘Spanish Brass (a) LIVE’ is the title for the latest ‘Spanish Brass’ project and is the title of the concert with which the group returned to the stage after the confinement of the months of March to June 2020. Live and in concert.

The name given to this show, which has subsequently been converted into a CD, alludes to the group’s need to meet the public live and in person. But it is also a vindication for the survival of culture, a sector that has been very much punished by the standstill and that, nevertheless, has turned its attention to offering content that makes the confinement more bearable.

The repertoire of this CD, which is the 27th of those published by Spanish Brass, follows a very similar route to that usually taken by the quintet in their concerts.

It begins with two overtures, Micro Fantasia, by Cesc Miralta, and Vamp, by Manel Burgos de la Rosa. Both works have been awarded in the SBALZ International Composition Competition in 2019 and 2020, respectively.

The musical journey continues with three original compositions for brass quintet. A-Brass-Ada, by Arnau Bataller, and Brisas de Metal, by Vanessa Garde, are commissions from the SBALZ Festival.

The third contemporary piece is Dance Suite, a magnificent work by Leonard Berstein for brass quintet.

The CD continues with five adaptations for brass quintet of universal works. The first is an arrangement by Carlos Benetó, trumpeter of Spanish Brass of Manuel de Falla’s El Amor Brujo. In this piece, Spanish Brass has the collaboration of percussionist Pablo Domínguez.

The last four arrangements are by the composer and trumpet player Thierry Caens: Georges Bizet’s Carmen Miniature; Chaplin Suite, which brings together some of the most significant works by the composer and actor Charles Chaplin and, finally, two magnificent compositions by the Argentine musician Ástor Piazzolla Oblivion and Libertango.

Spanish Brass have recently been awarded ‘National Music Award 2020’, the most important of all those granted in Spain in the musical field known in Spanish as ‘PREMIO NACIONAL DE MUSICA 2020.‘

The jury awarded this distinction to Spanish Brass “for its extensive career consolidated in more than 30 years as one of the most versatile and relevant brass quintets on the national and international scene. They also underlined “the numerous collaborations that show their commitment to contemporary music.” The chamber music quintet ‘Spanish Brass’ from Valencia has received the ‘Premio Nacional de Música’ 2020 (National Music Prize 2020)and awarded by the Ministry of Culture.

A trajectory of more than 31 years underlines the merit of this excellent Valencian group ‘Spanish Brass’ in receiving this most prestigious award, “for Spanish creation and “their formative and pedagogical vocation, which has been able to create a school and make music that reaches the younger generations”.