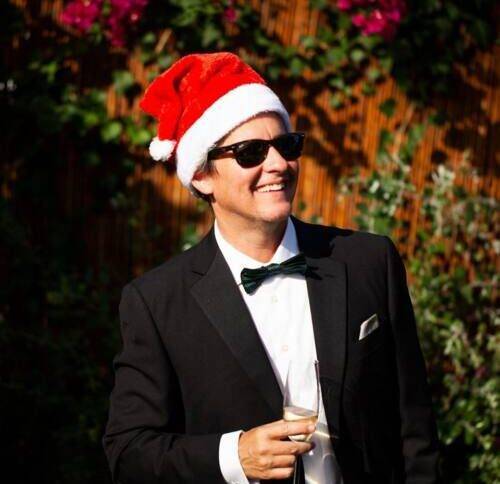 Josh Rouse’s ‘Christmas’ album is called ‘The Holiday Sounds of Josh Rouse’, which he presented at ‘Loco Club’ in Valencia a while back. Josh lived with his Spanish family in Valencia for many years but they are now based in Nashville. With an international fan base, this concept album is new territory for the American former expat. The idea of doing a holiday collection of songs was first suggested on tour by legendary musician & friend Nick Lowe. Themes include Xmas in this part of Spain and childhood memories of Christmas holidays spent in the USA too. Josh adds: “It’s something I’ve been chipping at… without realizing it.”

A father of two young children with Valencian artist Paz Suay, Josh Rouse  adds: “I decided that if I was going to make a holiday record, I didn’t want to load it up with sleigh bells and choirs and sing the same old standards that everybody else has already sung. I approached writing these songs like I was soundtracking a film. I was trying to bring all these little holiday scenes around the world to life with humour.  For the past 10 years, I’ve been in Spain for Christmas. There was no snow or no real cold weather, so I would write some music to get in the Christmas spirit.”

24/7 Valencia: Can you tell us what made you move back to the U.S.A. after having lived in Valencia for so many years?

Josh Rouse: Nashville is the music capital of the world in my eyes. Although I was born in Nebraska, I consider it my home in the U.S. as I lived there for a long time. They have melody in the tap water!

24/7 Valencia: How do you find life out there compared to living in Spain?

24/7 VALENCIA REVIEW OF ‘THE HOLIDAY SOUNDS OF JOSH ROUSE’

Light-hearted and languid with festive marimba sounds, ‘Mediterranean X-mas’ has a video shot in the Valencia region. In memorable juxtaposition, Josh wears a black suit in sunny weather by a swimming pool with his kids… and a Santa hat on his head whilst strumming a Spanish guitar: “Sun is shining and we’re wearing  flip-flops!”

‘Red Suit’ has a nasal ‘Nashville Skyline’ feel. It’s a steady-groove about Father Christmas using GPS to visit your local neighbourhood when everybody is asleep at Christmas. In spirit, this one is family-man  Dylan with a touch of Raymond Briggs!

‘New York Holiday’ is a wonderful track with memorable double bass, smoky piano fills and a jazzy feel that brings to mind Dean Martin in his heyday. A former resident of Brooklyn, Josh captures the essence of the great city as he refers sympathetically to memories of times spent in various barrios of ‘The Big Apple’.

‘Easy Man’ is a laid back number about being content to be back in time for Christmas with his family and hanging out with “the in-laws…they’re really not so bad.”

‘Sleigh Brother Bill’ has an upbeat, lolloping rhythm that carries the song up and down the joyous yet perilous snowy hill from Josh’s childhood. “Small pine trees can cause a crash!”

‘Lights of Town’ has a seductive Nina Simone-esque piano theme with Josh taking his bride out to see the bright lights on New Year’s Eve. They’re happily determined to paint the town red…drinking Bourbon & Coca Cola, hearts a-skipping, dizzy & looking for fun with bloodshot eyes: “You wanna go where the action is… and steal the night!”

‘Letters in the Mailbox’ is more melancholy with Rouse mooching in galoshes through the cold & snow of North America. The months pass and it’s Christmas and he is silently suffering the snail-mail correspondence from the partner he so misses: “How’s the weather in Spain? I get so lonely this time of the year.”

‘Heartbreak Holiday’ is a break-up song with a sunny melody. There’s a dark underbelly to this track with Josh feeling thwarted, outgunned & deserted by a canny ex-girlfriend: “Taking back my presents and wondering if you are too?”

‘Christmas Songs’ is a slinky & optimistic way to tie the album up, which pays homage to the immortal Nat King Cole too.  Josh is alone on a “heated, hardwood floor” and stuck in Sweden at Christmas but loving the songs and festive spirit of Gothenburg. He meets a “Big Ole’ Blue Eyes Swedish Girl…Hark the Herald Angels sing!”