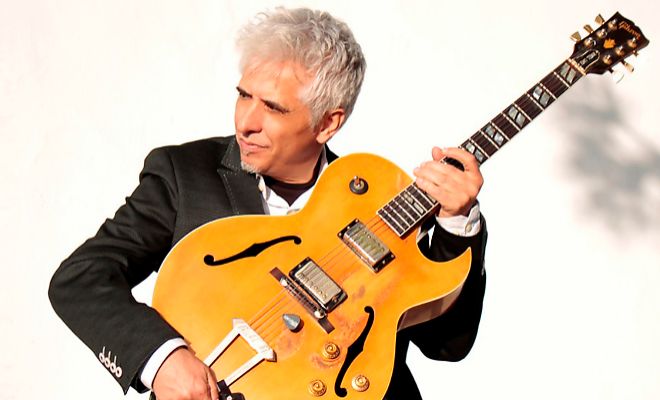 Legendary Valencian guitarist Ximo Tebar has been offered a teaching post at UCLA (University of California, Los Angeles). He received an invitation from UCLA Global Jazz Studies to participate in a call for applications for the position of lecturer in “Advanced Jazz Guitar Performance”, he applied and was selected.

XIMO TEBAR: The truth is that for me it is a great honour to be part of the teaching team alongside these great masters. Anecdotally, it’s also been a very special experience because the head of the UCLA jazz guitar department is the great Kenny Burrell, and I was lucky enough to study with him thirty years ago! When Kenny interviewed me about joining UCLA, he didn’t remember me, but he said to me (jokingly) “now I understand why you are such a good jazz guitarist… because you were my student!” As far as my career is concerned, it’s going to give me more experience with my guitar playing.

24/7 Valencia: What is the concept of A-Free-Kan Jazz Dance Big Band?
Ximo Tebar: The name itself is an indication. It is a musical jazz project that includes the African tradition of dance and percussion.

24/7 Valencia: Explain to us the roots of Jazz with the music of Africa

Ximo Tebar: Jazz is pure rhythm…and the rhythm of jazz comes from Africa.

24/7 Valencia: Please tell us something about each song on the album ‘Ximo Tébar A-Free-Kan Jazz Dance Big Band…

Ximo Tebar: I can summarize something of each theme, but if you are interested in knowing more about the themes and the arrangements I invite you to read the extended notes that the doctor in musical research José Pruñonosa has written in the booklet of the album. On the website www.afreekanjazz.com there is more information and you can even listen to the album.

The opening track on the album is Peter Gunn, a composition by Henry Mancini that has been covered by many artists. The most popular versions are from the film ‘The Blues Brothers’ and group ‘Emerson, Lake & Palmer’. In my version, I have made a nod to that version by ELP.  Its development is based on continuous reharmonizations, since it is originally a modal theme.

Caravan Nazari is a re-composition of an arrangement I wrote from Duke Ellington’s Caravan. It has finally progressed-evolved into a new melody with a Nazarene character while respecting Ellington’s original structure.

Velours is a theme by musicians who bring fresh sounds and apply newer rhythms to the song. The main soloist is Will Martz on the keyboards, who also acts as co-arranger.

George Gershwin’s Summertime is the fourth track on the album and is sung by vocalist and percussionist Vinx, a regular collaborator of Sting, Herbie Hancock or Stevie Wonder.

Con Alma is a composition by the great Dizzy Gillespie and the arrangement is based on a rhythmic amalgamation that I have labelled as pseudo-bulería, because it mixes the flamenco bulería pattern with other rhythmic patterns.

In my opinion, the result offers a fluid listening both melodically and rhythmically. I always try to generate interactive music, and above all, something “understandable”, even though theoretically or technically it may be a virtuoso interpretation and in some way difficult to perform. I think this performance is a good example.

Always and Forever is a composition by Pat Metheny that I have tried to take to more bluesy terrain.

In Wayne Shorter’s Footprints I have simplified the rhythmic of the melody to give it a more ambient and enveloping character, focused on voice and dance.

And the very popular Pata Pata by Miriam Makeba is the closing track of the album in a festive and participatory tone sung by vocalist Kuami Mensah of Benin in Africa.

On the other hand, the album comes with a DVD that includes live versions of some songs, and additional content such as the scores of the big band arrangements.

24/7 Valencia: What are your plans for A-Free-Kan Jazz Dance Big Band?

Ximo Tebar: I would like very much to be able to tour with this great music and dance project. I also am fortunate to have the support of the musicians and dancers who are excited and enthusiastic about the show. I know that it is a difficult project to move because of the number of people who are part of it, more than thirty, between the artists and the technical team. However, I will try to make this work, given the effort that has been made by everybody to bring this project to life.

24/7 Valencia: Explain the ‘Son Mediterráneo’ to us…

Ximo Tebar: ‘Son Mediterráneo’ is the title of a track I composed in 1990 and which also served as the title to my fifth album. That album had a lot of national and international success and from that moment on they began to catalogue my music with the label ‘Son Mediterráneo’. The truth is that I feel identified with the label, because the jazz that I make has that happy, colourful and luminous air that characterises our Mediterranean culture.

24/7 Valencia: How do you see Valencia as a city of music?

Ximo Tebar: Music in Valencia forms part of our identity, culture and tradition… but the reality is that the importance it has here does not correspond to the institutional treatment given to it… when it comes to prestige, educating, updating, training, innovating, and valuing and internationalising the most representative sign of identity of our land, which is music.

24/7 Valencia: Why is the guitar such a special instrument for you?

Ximo Tebar: It is special because it is the instrument that I have tried my best to master and that allows me to express and transmit myself through music.