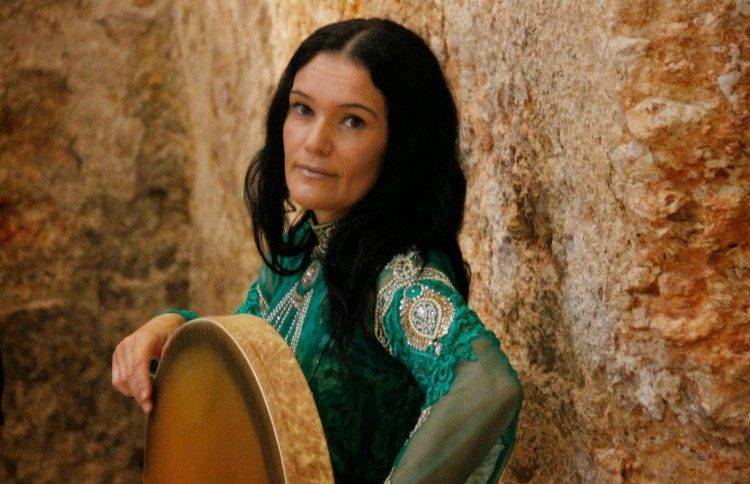 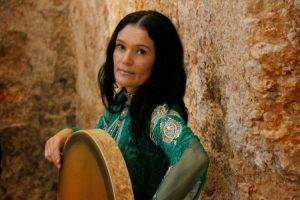 As an active participant in the Sete Sóis Sete Luas Festival, Valencian musician Mara Aranda has taken part in international projects with Luigi Cinque, for his record Alentejo Story Concert (2005) inspired by Saramago’s novel Levantado do Chão along with Elena Ledda. Following this, she teamed up with the Algerian singer and composer Akim El Sikameya to record a DVD and go on international tour. El Sikameya had put together for his Med’Set Orchestra musicians from across the Mediterranean: from Andalusia and Valencia; from Tuscany and Sicily; from Portugal and Greece. Then in 2012 she took part in the Sete Luas Orchestra with Mario Incudine as a director, touring Europe speading her key message: coexistence and the fusion of Mediterranean cultures.

She has worked with such Spanish artists as David Cervera and Miquel Gil from Valencia. She worked together with David Cervera on his album Talaud in 2004. This was a fusion of traditional Mediterranean culture and classical music with avant-garde elements. She was the key participant with Miquel Gil on his album Organic.

Motivated by her desire to study and research traditional music, she travelled and lived in Crete during 2003 and 2004. There she met Ross Daly and learnt about his musical and educational project in Labyrinthos. She also attended a seminar on Bulgarian music and voice given by Tzvetanka Varimezova, Director of the Bulgarian National Radio Folk Orchestra. In 2005, she returned to Thessaloniki, Greece where she studied folklore, traditional vocals and music in depth. She got to grips with religious Byzantine chant at the En Chordais academy with Drossos Kutsokostas.

It was also in Thessaloniki, -the Jerusalem of the Balkans for the Sephardim-, where she began to complete her repertoire by exploring more the Western perspective due to her proximity to mainland Spain. Here, she made contact with Nikos Tzannis-Ginnerup who received the legacy of the Sephardic musical tradition from David Saltiel. The result was the album Jewish-Spanish Songs of Thessaloniki (Oriental Music, Berlin, Germany, 1997).

Mara Aranda’s research and compilation is reflected in the album Musiques i Cants Sefardis d’Orient i Occident -Sephardic music and song from east and west- with Aman Aman titled published by Galileo-mc.

The fact that she moved away from her own roots in a geographical sense made her look back at them with a renewed interest. She started get to grips with traditional song from Valencia -cant d’estil- through the great singer-songwriter Josep Aparicio ‘Apa’ and went on to perform different television series’ soundtracks too.

In 1998 she put together the group ‘L’Ham de Foc’ along with Éfren López; a project with Greek, Turkish, Balkan, Arab, Iranian, and Afghan influence, but with a strong Valencian identity.

L’Ham de Foc went on to become one of the most internationally acclaimed Spanish groups at the time, bringing together a broad fan base from across the musical spectrum. They managed to reach a diverse audience; enthusiastic and loyal to a musical and artistic style that was different, authentic, adventurous, open and far removed from the conventions of folk, rock and pop. It developed into a unique timeless musical concept without trying to follow other trends. Their compositions grabbed the attention of artists and the public alike. Three albums were recorded between 1999 and 2006, all critically acclaimed: U, Cançó de dona i home and Cor de porc.

For two years on Channel 9 Radio-Si Radio in Valencia, she produced, directed and presented the programme Microkosmos dedicated to early and traditional music.

She played the lead in prestigious producer Pyrene’s documentary programme Vinoleum dedicated to Caroig Massif, with photography and texts by Manuel Asensi and music by Joan Manuel Serrat and L’Ham de Foc.

In 2007 she embarked on a fascinating journey with German group Estampie, led by Michael Popp; a project that revolutionised the interpretation of early music in Central Europe. The formation was christened Al Andaluz Project and brought together the strength of its three female vocalists: Sigrid House -Estampie and Qantal’s lead singer-, Iman Kandousi and Mara Aranda. The each represented three different musical heritages of the three cultures in Spain.

Along with musicians Aziz Samsaoui, Ernst Schwindel, Sacha Kotochnikov and Jota Martínez they created something that had never been done before.

The fruits of their efforts can be seen in Deus et Dibolus, Al Maraya and Abuab Al-andaluz, and includes a repertoire inspired by Central European, Sephardic and Andalusian cultures.

In 2013 the much anticipated album Sephardic Legacy saw the light of day, a celebration of the music and song of the Sephardic Jews in the Eastern and Western Mediterranean.
She has worked with the group Solatge on a repertoire of traditional music from the historic territories of Aragon, the album Deria has won several awards: Best Folk Album 2009 COM; Best Folk Album Catalunya Radio programme, Hydrogen; and several weeks in the WCME’s prestigious ranking of Best Folk Music Groups in the World. Their second album Lo testament was released in 2013 winning the award Best Folk Album 2013, again from COM.

Her latest album is ‘Mare Vostrum’. This impressive collection of songs reflects her deep love of Mediterranean & world music and culture.

This song is based on the sounds of traditional music from the mountainous Rhodopis region of Bulgaria. It is the dramatic tale of two doomed lovers.

Memories and memories lost are the centre of this song, which talks of the slow loss of a woman suffering from Alzheimer´s disease.

This comes from the shamanic tradition of Iranian, Azerbaijani and Anatolian music. These cultures would often dedicate their songs to nature in order to receive protection.

“It’s not unclean, it shouldn’t be hidden away, and     nobody can punish you for it.

Let it be, for pure love is the work of God and his court of Angels who guide the way.”

Midway between the flamenco style typical of southern Spain and Turkish baglama music. This particular buleria tells of betrayal and disenchantment, common themes in the music of both cultures.

A Bulgarian instrumental with an 11/8 time signature. The hurdy-gurdy is the driving force of this piece, inspired by the ornamental and modal sounds of the Gaida.

Syrtos of the Unhappy Wife

The Laouto is a Greek instrument belonging to the lute family. It leads as an interpretation of a dance based on Chaniotiko Syrto, from the Greek Island of Crete.

This song is an example of those times in life when seduction prevents us from seeing the true nature of things. The story is told through the sounds of the baglama and voice, both perfectly integrated into rhythms typical of the historical and geographical Thrace region of Greece, centred on the modern day borders of Bulgaria.

Sea of My Mother

“…My body has been baptized by water and salt, but my heart can be found somewhere in the strip of land between the sea and the great Castillian plains.”

I Come From A Place

This is a homage to all the good folk who are my countrymen. A noble people, with dearly held values and an enormous heart that knows of comprehension and forgiveness, of support and love.

This song is inspired by the profound love that every mother feels for her offspring.