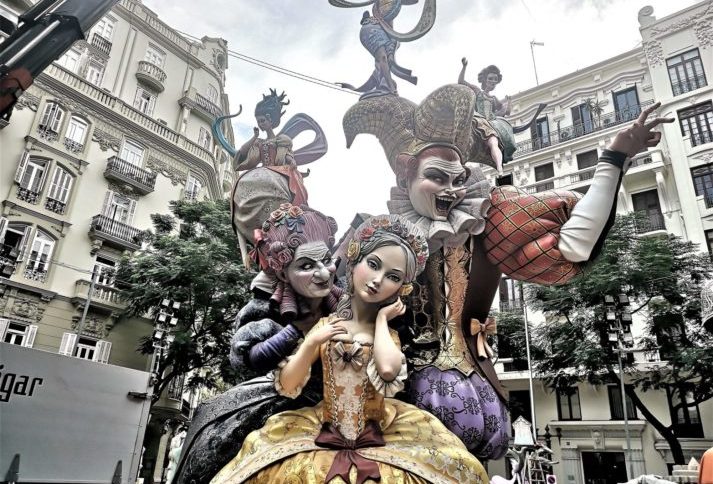 Are you interested in folklore? Tradition? Big dresses? If you are, stick around. Valencia has all that and more, during the celebration known as Fallas. Read this and consider yourself armed for the festivities.

This March 2022, you’ll see these large sculptures being set up at practically every street corner  in Valencia. Anything can be represented in a Falla ; the Ten Commandments, the plight of the crippled, World Peace or belly button lint. These are then ceremoniously burnt (in La Cremà) by proud firemen.

Think of a friendly neighbourhood association (again, at every street corner) whose main mission, apart from setting up its Falla, is to wake you and all your neighbours up at 4 o’clock every morning. You’ll finally get back to sleep only to be awakened again by it’s morning marching band (La Despertà). You can avoid this by joining a Casal yourself, allowing you to be the object of your neighbour’s hatred.

For hardcore Valencianos (nearly all of them). City hall, not wanting to miss out on the fun, holds it own circus of noise every afternoon at 2 o’clock. The Plaza Ayuntamiento is stocked with an impressive amount of firecrackers , which are then all lit. Loud explosions leading up to a crescendo of painful sonic booms typify a good Mascletà. Generally lasting 10 to 15 minutes, the experience will leave you with gun powder and sulphur in your lungs and bleeding ears, but hey, who cares? You’re only young once!

Watch out! You could be knocked over by one if you’re not paying attention. More than just a big dress, the Fallera’s costume is the Non Plus Ultra of traditional fashion wear. Covered by enough lace, brocade and satin to bury a man (or Fallera), these brave women take part in all the city’s festivities. You’ll see them representing their Casals by marching in parades, posing for pictures, making paellas on the street and having nervous breakdowns, smiling all the while. Acute observers will make the comparison between the Fallera’s headwear and a science fiction film character, but the similarity ends there. These are Valencian Earth girls , born and bred!

A misnomer, actually. Normally, the nightlife lasts all day and night during Fallas and Valencia doesn’t really sleep. 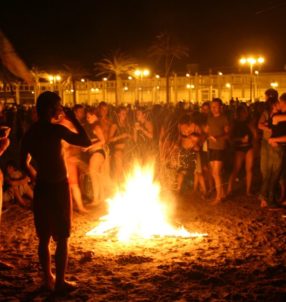