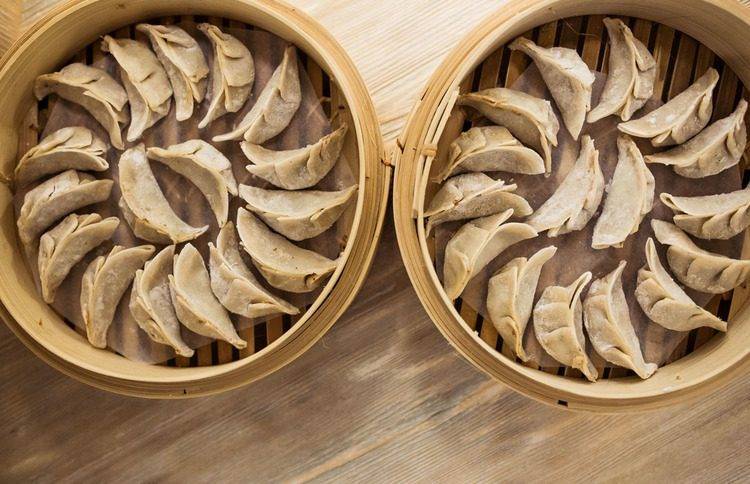 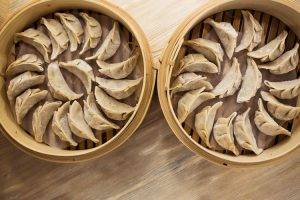 Walking through the streets of the Barrio del Carmen on the way to our table at 98 Degrees Dim Sum Experience was a little like being on the set of ‘The Walking Dead’. We pass people with major stab wounds, gashes on their faces, hollows where there should be eyes, and the most outlandish costumes and clothing. It was hard to make it through some of the streets for the throngs of weirdos! It was, of course, Halloween night in Valencia, and a night that has grown in the past few years from nothing to a major street party, particularly in the historic centre!

We had a late table booked for 22.15h but because of the ghouls & corseted women & monsters & general crazies, we arrived 15 minutes late. 98 Degrees Dim Sum Experience was heaving, Eddie, the owner-chef of this new enterprise, welcomed us and told us that he had kept us a table on the terraza, and introduced us to Oscar, our waiter for the evening. He explained the concept of 98 Degrees Dim Sum Experience: Steam, Cantonese- style dim sum with a Mediterranean twist and proceeded to place four small dishes in a row between us. He filled them with dipping sauces – a citrusy mix of ginger, mint and mirin, a sweet chili with honey and light soy sauce, a traditional mix of Chinkiang vinegar, soy and olive oil, and ‘El Calentito’, which was garlic, wild chili and tomato…hot, but not too hot! These were to be used throughout the meal for the various handmade dim sums that were to follow.

But first, we enjoyed a refreshing glass of Atance ‘Cava Brut Nature’ from Requena. We wondered, as we drank (and dipped fingers in the sauces to try, unconventional, I know, but we were eager to try!), how the dim sum would be served… as when we have had it in Chinatown in London, or in Hong Kong, it was served from trollies that made the rounds of the restaurant.

Then the bamboo steam baskets began to arrive on wooden boards. First up was ‘Char Siu Bao’, which was steamed buns filled with barbecue- flavoured char siu pork (2€ each), one of my personal favourites, as it was sweet and soft and delicious. Next came ‘La Huerta’, small, crescent-shaped dumpling filled with carrot, Chinese cabbage and pumpkin (4.80€ for 4). And then four more, these were filled with four mushrooms, oyster, shiitake, shimeji and mu-er (5.20€ for 4). They are so attractive, these tasty little half-moons, you almost can’t help but enjoy them.

By now we had a bottle of ‘L’Inconscient’, a lovely Priorat red (Shiraz/Syrah, Cabernet Sauvignon, Merlot) wine from Les Cousins, Marc and Adriá (17.50€ a bottle).

Next came the star of the show, as far as D and I were concerned. ‘Costilla corta’ were boneless ribs of veal, slow cooked for eight hours and glazed with white radish and caramel and topped with a shredded cabbage (9.10€). Melt-in- the-mouth, full of flavour and absolutely stunning.

There was still more to come, ‘Cuak cuak’ – yes, you guessed – roast duck and Chinese spring onion- filled dumplings, (6.10€ for 10) and yum yum! Our final dim sum was ‘Chupa chups de langoustine’, large shrimps battered in a super crunchy and crispy coating and sprinkled with the tiniest pieces of chopped cucumber I have ever seen (8€ for 6). We cleaned out our dipping dishes with these delicious morsels!

It began to drizzle slightly and get a little cold outside and the crowds inside had thinned, so we elected to move inside the restaurant for our dessert. The interior is dominated by the bar, behind which Eddie prepares his little steamed parcels, cocktails are mixed and coffees and teas (big selection) are brewed to order.

You can sit at the bar and watch Eddie and eat while he sends out his logo- stamped bamboo baskets. To the left of the entrance are tall tables and stools and to the right a ‘chill out zone’ with low banquets and lower tables. This is where we sat to eat our ‘Choco-Vap’, a steamed molten chocolate cake served with grated white chocolate and a mango foam (5.50€) and a half-portion of ‘El Refrescante’, a lychee sorbet with yoghurt and a jasmine honey and mint swirl (5.50€). The older I get the more I am a sucker for chocolate puds and this didn’t let me down. D really loved the lychee.

Eddie came and joined us to chat about his plans for 98 Degrees Dim Sum Experience. It is billed as a cevichería / cocktail and chill out bar / cooking workshop & play centre, so we were intrigued to know more. The cooking workshops will start later in the month, initially for children, as will the play centre. The idea being that parents can come for brunch or lunch and their kids will be entertained while their parents eat. Great idea!

He plans for 98 Degrees to open more branches around Spain and is planning to franchise it. The staff around him at 98 Degrees are charming and obviously extremely happy and work well as a team. Eddie, who trained under Gordon Ramsay and other Michelin-starred restaurants around Europe, is a busy man who seems to thrive on challenge. Not only does he have 98 Degrees Dim Sum Experience, but ies to and from Kuwait on a regular basis consulting on a restaurant project there. La Comisaría, his other restaurant just around the corner in Plaza del Árbol, is still running under his supervision, but with a new and talented chef.

We found out they make excellent gin tonics without him having to tell us because we drank one as we chatted! We had a great time at 98 Degrees – we’ll be back and next time we’ll try the ceviche! 98 Degrees Dim Sum Experience is already getting quite a reputation, and is getting booked, so book early if you want to experience it. They offer great menu deals with an 8€ menú del día and a 20€ night menu.