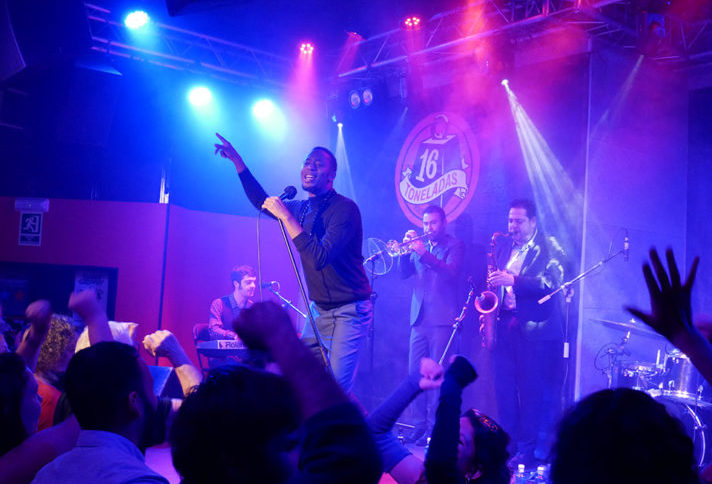 A NIGHT OUT AT ‘16 TONELADAS’ IN VALENCIA

Based in the barrio of Campanar, ‘16 Toneladas’ is a welcoming live  music venue with a dedicated audience. It is just a 10 minute walk from the historic centre of Valencia and near the main coach station of the city. The doors have just opened for this evening’s concert by J.P. Bimeni and The Black Belts, and already the red-lit sticker-covered space is filling with rock enthusiasts. They embrace, chat, or grab a drink from the two bars on either side of the raised stage, as we enjoy the well-chosen background music and the spinning disco ball which illuminates the floor and ceiling.

First on the stage are the 6 renowned Madrileño musicians who make up The Black Belts: Rodrigo Díaz on drums, Pablo Cano on bass, Fernando Vasco on guitar, Álex Lárraga on keys, and Ricardo Martínez and Rafael Díaz on trumpet and sax respectively. After a swinging song from the band, guitarist Fernando welcomes J.P. to the stage to thunderous applause.

A self-taught Burundian musician who has lived in London since the early 2000s, J.P. Bimeni is inspired by his idol Otis Redding, with other influences including Ray Charles, Bob Marley, and Marvin Gaye. Together with The Black Belts, they create 60s-esque Motown and Stax-inspired grooves that you can’t help but sway or nod your head to.

In fact, many fans can barely stand still, with the first three rows of people dancing during the entire performance. The venue is set up perfectly for a boogie, with only a few tables at the back and coat hooks around the dance floor, so you can hang your jacket and dance the night away. If you’re bored of concerts with only head nodding and drink holding, the crowd at ‘16 Toneladas’ will help you let loose. The audience seems to be mostly 30s and over, and a welcoming community. The venue is full but friendly, with enough space to comfortably move, and enough people dancing that you won’t feel under the spotlight if you join in. If you prefer to sit and enjoy the music, make sure to arrive early. The few tables at the back will be claimed quickly!

The music is fantastic, with lighting choices in oranges, blues, and reds, that enhance the performance. The highlight of the night by far, however, is how happy everyone is to share this evening together. The band onstage is grooving and smiling, and the audience waves their arms, claps and dances. The first two rows bow their arms down dramatically to each band member as they are introduced by name, shakes their fingers ‘no, no!’ at the suggestion of a last song, and reaches their hands out for a genuine clasp in thanks to singer J.P. after the show is all over. Even after the final bow, and The Black Belts have left the stage, J.P. Bimeni stays for long minutes afterwards, shaking the hands and kissing the cheeks of his dedicated fans.

If you’re looking for an evening of rock music in a sociable venue, where the age ranges past university students, ‘16 Toneladas’ is for you! For more information about the venue and J.P. Bimeni and The Black Belts, follow the links below.

Report and photography by Julia McGee-Russell

J.P. BIMENI AND THE BLACK BELTS