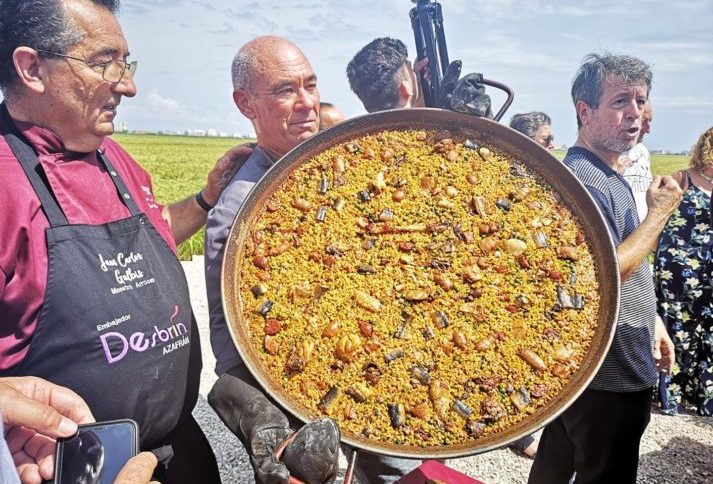 Paella has become a gastronomic delight with a truly international reach and with Spanish restaurants, all over the globe, featuring the rice dish on its menu. Yet its origins are in Valencia. Any proud Valencian will tell you that if you’ve ever had something calling itself paella outside Valencia…that really all you’ve had is rice with bits added to it. Only in Valencia can you get the real thing.

This dish stems from humble peasant origins with paddy field workers using the rice, beneath their feet, as the basis for their midday meal. Under the famous Valencian orange groves, these workers would use whatever they had to hand, whether that was duck or rabbit or chicken or seafood and cook it in the paellera, the pan which gives the dish its name. Now it has achieved international fame and is not only synonymous with its birthplace of Valencia but also with Spanish gastronomy as a whole. This dish has spread across Spain and internationally with chefs of every calibre attempting to replicate the wide array of unique flavours packed into this tour de force of Valencian cuisine.

Rice is at the heart of traditional Valencian cuisine. While it is easy to become focused on the delights of paella, there are many more delicious dishes to sample including; Arròs Negre (made with, squid or cuttlefish, and squid ink, which gives the dish its characteristic black colour), Arròs al Forn (an oven-baked dish with pork ribs and black pudding) and Arròs con Costra (a cross between a paella and a casserole with a glossy top crust of beaten eggs).

But why is there so much rice in Valencian cuisine? Like a lot of things in Spanish history, it was brought to the Iberian Peninsula by the Moors, who ruled Valencia from 711 to 1238. Not only did the Moors bring rice to Spain, but they also brought complex irrigation systems to the Iberian Peninsula, stemming from practices in the North African desert. These kick-started Valencia’s agricultural development, making its terrain extremely fertile for rice crops. The Spanish word for rice, arroz, even stems from the Arabic rūz (رز). Without the transportation and planting of rice by the Moors, Valencia’s signature dish might never have existed. What a tragedy that would be for our collective taste buds.

Enough with the history lesson. We know why you’re here. You want some recommendations where you can get top-quality paella and avoid the tourist traps that will rip you off as soon as they hear you can’t roll your ‘r’s. Here are my personal favourite Paella spots in Valencia.

Turning off the busy Carrer d’Antonio Fernandis, you might be forgiven for thinking you’d been teleported to the countryside. One moment on a busy urban highway a three-minute walk from the futuristic City of Arts and Sciences, the next you’re on a single-track country road surrounded by fields and farmhouses. One of these farmhouses is the Alqueria del Pou, a beautiful whitewashed building covered in ivy and wildflowers. Four cats patrol the tables alongside the waiters but refrained from jumping up and tucking into our food with us. We had the Paella Valenciana, which comprised; duck, chicken and rabbit with green and broad beans. Every mouthful was an explosion of rich, sumptuous flavours which had me exclaiming “that is so good” after every bite. There was a whole leg of rabbit in our dish which was wonderfully seasoned and had an exquisite texture. Each meal comes with a complementary piece of cake and a shot glass of sweet dessert wine, which is a welcome treat. I will definitely be going back.

Located in the heart of Valencia’s historic centre, just off the Plaza Redonda, La Coveta is a hidden gem, with rustic decor that will satisfy your urge for Spanish authenticity. With the hustle and bustle of the city outside seemingly muted in the cosy interior… we tucked into seafood paella, which exploded with flavour with every mouthful. The large and tasty shrimp were succulent and tender, and the prawns and mussels gave an added kick to every bite. Outside of the paella, the patatas bravas here were also some of the best I’ve had in Valencia, with a rich homemade tomato sauce and aioli.

If you are willing to go the extra mile for your paella, it is definitely worth taking a bus to the town of El Palmar in the Natural Park of Albufera, where paella was born. The 24 bus will take around 50 minutes to get you there and only costs €1.50. When arriving in L’Albufera you can see that it has really lent into its history, with almost every square metre being dedicated to paella restaurants. Throw a stone in any direction and you’ll hear the clang of it hitting a paellera pan. While there I would recommend going to Arroceria Maribel, located at the far end of the town and right on the canal. Offering a broad array of Valencian rice dishes, this was some of the best paella I had in Valencia. We had the seafood paella accompanied by a jar of the notorious Agua de Valencià and the pairing was simply gorgeous. Definitely worth the bus ride. A great post-paella activity is the boat tours onto the lake where you can watch the sunset over the mountains, happy, content and full of good food.

Now all potential paella samplers need to be aware that Paella is traditionally a lunch dish. Some Valencians even say that a paella restaurant serving Paella after 16:00h is no true restaurant. A few of the more purist restaurants will only open from 13:00h to 17:00h. So if you’re thinking about having a healthy portion of Paella for dinner, you might want to check the opening times.

If you want to make your paella experience a little more social, a Valencian local has launched a paella app called “Peterpaella”. Pedro Barberá has devised a collaborative platform where amateur cooks and diners come together to share a paella gastronomic experience in Valencia. It is a way for diners to enjoy a unique dining experience and socialise with food lovers, and for amateur cooks to showcase their skills. As its creator commented, “Peterpaellas works like Airbnb, BlaBlaCar or Tinder. It only takes someone who offers a space, their talent and to make a paella for people who want to enjoy this traditional dish.”

Any amateur cook who has a nice place to host and enjoy paella can be part of ‘Peterpaellas’ and register in the app. The host posts on the app offering a gastronomic experience, specifying the type of dish, and the maximum number of diners on a date to be determined by all those who apply. A Valencian rice dish is strictly mandatory, from a ‘Paella Valenciana’ to seafood, arrós a banda and many more. Guests sign up for the experience and pay in advance through the app. This is just one of Valencia’s wonderful idiosyncrasies.

Also if you’re not looking to have a big sit-down meal but want something to take away, maybe for a lunch at the beach, Valencia is full of little shops called “Comidas para llevar” (food to take away). These dispensaries sell boxes of food at lunchtime including meatballs, lasagna and paella. While these are obviously not of the standard of a restaurant, they still taste really good and they are miles better than buying a supermarket sandwich.

For more on Islamic Valencia: https://247valencia.com/food-language-and-architecture-the-remnants-of-muslim-valencia/