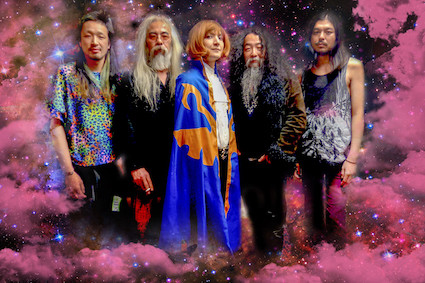 24/7 VALENCIA: What can we expect from your show in Valencia at ’16 Toneladas?

KAWABATA MAKOTO: I have no idea what we’ll play at the show in Valencia ‘coz we have never have any set list before the show. Even the song order is improvised by people, place and time there… in each show. Also, we’ve tried to play something that is changeable and different during every show. We’d like to play the best we can, better than last night… for every night we play live.

You have released 100 albums since 1996, which is incredible. Can you tell us something about the music contained within these grooves?

100 albums? Of course, I’m still hearing music. I can make more music and record albums until the time when i can’t catch music anymore… from my cosmos.

Is Krautrock an influence? What does Stockhausen mean to you?

I love Popol Vuh and Tangerine Dream when I heard their album  ‘Rubicon’ as a teenager. Stockhausen is my first musical experience as an influence, when I was 10 or 11 years old.

I had always some ringing in my ears since childhood. I believed it was a message from a U.F.O. but when i discover Stockhausen’s electro music from radio then, I thought, maybe my ringing might be a kind of music?

Since then, I’ve tried to listen to the ringing more carefully, the sound has changed and developed and it is more like music and up to the present day too…

You have travelled a helluva lot as a band to North America and Europe. How does growing up in Japan compare?

I think my music is wanted by people who have grown up with the drug culture. Unfortunately, there is no drug culture in Japan… but i don’t care.

I wanna play music for people who need it.

What are your memories of your collaboration with Gong?

Daevid and Gilli, they were my psychedelic rock hero and heroine since I was a teenager.   It was like a dream time in my life… so many beautiful memories.

Daevid liked AMT’s standard “Pink Lady Lemonade”, and has sung with his lyrics on it, many times. Then that song was changed to become like Daevid’s song! I thought, the music has its own will and chooses the musician!

When I recorded with Gilli’s voice as a duo, i played glissando and spacey guitar. Then Gilli said; “Play more noisy! Don’t play like Steve Hillage!” Ha-ha-ha… Indeed…

Could you tell us something about your latest album, please….

Our latest one is a live album that was recorded live in Osaka on August 2022. It was the last show of the Japan Tour in Summer 2022  and this tour is the new bassist Shozo’s debut. This live album is the only  album with the present line-up. It has been released  only on CD.  If anyone wanna reissue on vinyl, please let us know.