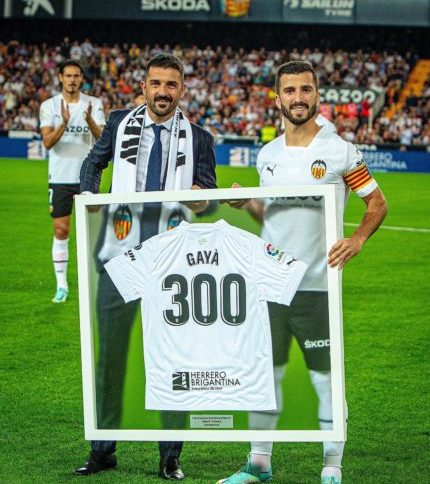 It is now just a matter of weeks before the World Cup starts in Qatar and several players from the Valencian Community clubs will have the opportunity to try and win the ultimate football competition for their country. Valencia has two players still in contention for a place on the plane with Spain to Doha. José Luis Gayà looks to have locked in a place with Luis Enrique’s squad. However, Hugo Guillamón’s place is less certain and he will have November 11th clearly circled in his diary. That day the Spain manager has to whittle his preliminary list of 55 players down to 26, and the midfielder from San Sebastian is on the cusp of making, or not making the cut in many people’s minds.

Both players have been in fine form for ‘Los Che’ despite Valencia only collecting five points from a possible fifteen in their last two away and three home games.

Guillamón may be in a direct shoot out with Villarreal’s Pau Torres for a defensive spot on the roster, but his ability to also play a midfield holding role may sway the manager the way of the Valencia star.

Carlos Soler, who scored his first goal for PSG in the Champions League against Maccabi Haifa recently and Ferran Torres. The latter received a super negative reception from the Mestalla when he came on as substitute for Barcelona last weekend should have done enough for a place in the 26, with the lack of playing time with their respective clubs being the only counter-productive argument against them travelling to Asia.

Former Valencia stars, Jordi Alba, Sergio Canales and Rodrigo may be three of the players to miss out in the final selection, but the latter is beginning to find his scoring touch again at the right time and could find himself a spot on the team. A potential injury doubt over Gerald Moreno strengthens the case for Rodrigo, but Moreno’s Villarreal team mate Yéremy Pino is another who could thwart the Leeds striker’s inclusion at the final hurdle.

Drawn in Group C, Spain have Germany, Japan and Costa Rica as their opponents. La Liga stars Marc Andre Ter Stegen (Barcelona) and Antonio Rüdiger (Real Madrid) are the only two Germans playing in Spain named in their squad, whilst the former Levante goalkeeper Kaylor Navas and Villarreal forward Joel Campbell are in the Costa Rica ranks. Gaku Shibasaki of CD Leganés and Takefusa Kubo of Real Sociedad are the players selected for Japan who are currently plying their trade in Spanish football.

In Group A, Holland have an excellent chance of qualifying as the draw was kind and pitted them against Ecuador, Senegal and the hosts Qatar.

The Dutch have former Valencia stopper Jasper Cillessen in their ranks but Justin Kluivert did not make the finals this time around. Ecuador had a nervous wait to see if they would be banned from the competition when Chile filed a case against them, stating they had played an ineligible player in the qualifying stages.

Fifa sided the way of Ecuador and consequently, Gonzalo Plato (Real Valladolid) gets a chance to play in the 22nd edition of the World Cup.

Senegal have the Villarreal star Nicolas Jackson heading to Doha, along with his fellow countryman Pathé Ciss, who is part of the resurgent Rayo Vallecano side this season. The hosts, Qatar, rely on players who all play in their country but their manager is the Spaniard Felix Sanchez. He was born in Barcelona but has spent most of his career coaching in Qatar.

Group B consists of England, USA, Wales and Iran. England has taken the same tack as Spain and named a provisional squad of 55 and then decided to name the final 26 players close to the required deadline. The vast majority of the team are going to be Premier League based but Jude Bellingham, who stars for Dortmund is likely to be the notable exception.

Yunus Musah looks like he will play in his very first World Cup for his chosen country of USA, and Gareth Bale will no doubt be the lynchpin for Wales, in their quest for further international glory.  Iran is coached by Carlos Queiroz, who spent a season in charge of Real Madrid before managing Portugal, Columbia, and Eygpt. He is in his second spell with Iran, being appointed after they became the 13th team to qualify for the 2022 tournament, replacing former Las Palmas coach Dragan Skočić in the process.

Argentina, Mexico, Saudia Arabia and Poland are the teams in Group C. Argentina have a plethora of Spanish based players in their preliminary based list. Three hail from Villarreal, goalkeeper Gerónimo Rulli, defender Juan Foyth, and the creative midfielder Giovani Lo Celso. Former Valencia favourites Nicolas Otamendi and Rodrigo De Paul are also still in the mix, in what is likely to be Leo Messi’s last chance at World Cup glory. Standing in the way of the South Americans progressing are Poland, and in Robert Lewandowski they have a striker at the very top of his game, as Valencia found out to their detriment in their recent league game at the Mestalla.

The evergreen Andrés Guardado will offer experience for Mexico. The former Valencia player has played over 150 times for his nation and, if selected, it will be his fifth World Cup. Frenchman Hervé Renard, who once managed Cambridge United will be in charge of Saudi Arabia, who like Qatar, will use players from their domestic league to try and create an upset.

France, Australia, Denmark and Tunisia will fight for bragging rights in Group D. The French will be considered one of the favourites to lift the trophy, and in the Madrid pair from rival clubs, Karim Benzema (Real) and Antoine Griezmann (Atlético) they have potential match winners.

Australian Mat Ryan spent more than a season with Los Che and will head to Qatar with the Socceroos. Ryan, who now plays for FC Copenhagen, will know many of the Danes quite well, and is likely to come up against his club city rival, Daniel Wass, who stars for Brondby. Anis Ben Slimane, who was born in Denmark and also plays for Brondby, is likely to turn out for Tunisia in what could be a really close fight for second spot, behind the French.

Group F includes the classy Belgium team along with Canada, Morocco and Croatia. Captain Eden Hazard will hope to put his poor form with Real Madrid behind him for the Red Devils, whilst his club team mate Luka Modrić, will be looking to go one better than the last World Cup, and sign off his international career in style.

Alphonso Davies, of Bayern Munich, is a key name in the Canadian set up, whilst former Valencia loanee Munir El Haddadi could be instrumental in any kind of success for Morocco.

The penultimate group matches up Switzerland, Brazil, Cameroon and Serbia. Basel born Eray Cömert, who is having an excellent start to the season in the heart of the Valencia defence, will have the unenviable task of trying to stop the Brazillian forward line. This is likely to include the Real Madrid duo of Rodrygo and Vinicius Jr, at some stage of the competition.

Bayern Munich’s Eric Maxim Choupo-Moting and former Valencia stars Uroš Račić and Nemanja Maksimović are players to watch out for… with Cameroon and Serbia respectively.

The final Group foursome puts Portugal, Ghana, South Korea and Uruguay together. Portugal could have André Gomes and Gonçalo Guedes in their ranks, in what could be also Ronaldo’s final act in a Portuguese shirt. Iñaki Williams has chosen Ghana over Spain for his international career and the Bilbao forward’s pace could be a real problem for the other teams in the group.

Kang-in Lee will be a favourite for the South Korean fans, but the Valencia player past or present who could make the most impact on the World Cup for his country is Edinson Cavani. If he can stay fit and feed off the service that Luis Suárez is likely to provide, then the South Americans could go deep into the tournament.

The controversy about Qatar hosting the event continues to grow as the tournament nears. Their questionable human rights, and confirmed high profile absentees like Prince William, are a few of the several concerns for FIFA.

The choice of the mascot is also somewhat baffling as well. La’eeb (Arabic for “a super skilled player”) is somewhat gender neutral, and according to the governing body, “is a fun and mischievous character who comes from the mascot verse, a parallel world where all tournament mascots live”. A very left-field approach! So  long as the mascot is not left in charge of the VAR technology… the ‘mascota’ may be a resounding success.

Qatar has a long way to go to prove it is worthy of hosting such a prestigious event. It is sure to come in for heavy criticism from the Western World whatever the outcome, and it may need to rely on football itself, and a World Cup of the pedigree of 1970 or 1982 to come out of the whole thing with positive connotations.