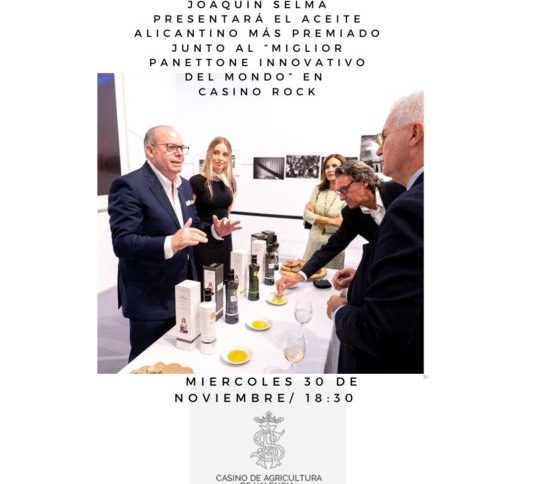 Valencia, 30th November 2022 – Joaquín Selma, alma mater of B&B Italia in our peninsula, president of Hacienda Cruz de Galindo and creator of Alicante’s most awarded olive oil, designed by Monica Armani, will be in Valencia today at Casino Rock to offer an exclusive tasting of Selma Millenary Olive Oil. He will also present a panettone made with AOVE Coupage. A sweet inspired by the traditional combination of bread, oil, salt and chocolate that has won no less than the Bronze medal for the Miglior Panettone Innovativo del Mondo in the competition organised by the Federazione Internazionale Pasticceria, Gelateria e Cioccolateria in Rome, which was held in the Palazzo Pallavicini Rospigliosi.

Back to basics and to the simplicity of the good things, highlighting their culinary value and increasing the possibilities for a healthy lifestyle. This is the embryonic idea of the Alicante businessman Joaquín Selma when he embarked on Hacienda Cruz de Galindo to create the best oil and, without ceasing to innovate and create synergies, joining forces with the pastry chef Raúl Asencio with a family tradition dating back to 1758 to promote a research project that has managed to make a panettone with natural sourdough from organic farming kneaded with SELMA Coupage EVOO (reducing the saturated fat in butter and replacing it with the unsaturated fat of EVOO).

A cold extraction extra virgin olive oil with olives grown in the Sierra de Mariola that creates a combination with Cacao Barry Alto El Sol chocolate toffee rocks, made with organic cocoa beans collected in the Peruvian jungle village of Juanjui; and with salt foam evaporated in the Bras salt pans of the Port of Santa Pola. The harmonisation of Selma extra virgin olive oil, with its light bitterness and herbaceous and fruity aroma, with Barry Alto El Sol chocolate, unique for its flavour with hints of olive and red fruits, and the salt foam, make this artisan sweet a unique piece, as this artisan panettone was part of the 2021 limited edition of three thousand units.

EVOO represents 3% of the vegetable oils consumed in the world, of which Spain produces more than 60% of the world’s production. Selma Millenary Olive Oil based in the Vega Baja has positioned itself among the best oils in the world with four types of EVOO, three with the picual olive variety: GRAN SELECCIÓN and ORGANIC (Early green olive harvested during the month of October). The Organic/Ecological, 100% free of pesticides and chemical fertilisers, which guarantees the purity and quality of the oil; SELECTION (Medium ripening, harvested at the beginning of November); and a COUPAGE of olives of the Grossal and Manzanilla varieties.

Among the many awards, we can highlight the Elio Berhanyer special prize for the best EVOO bottle design and dress in the Iberian Peninsula; the Gold Medal of the ARMONIA Award, in Parma (Italy) for the best design and image of international communication; Athena International Olive Oil competition Gold Medal to the AOVE Gran Selección or the Japan Olive Oil Prize “Best in Class” award to the best AOVE Monovarietal Gran Selección.

The brothers Andrés and Mario Hidalgo, left the charming rice restaurant Ánfora to travel to Madrid and now return to their native Valencia to an emblematic place, the Real Sociedad Valenciana de Agricultura y Deportes, better known as Casino de Agricultura. From Comedias Street they work with passion, tradition and fusion. With the opening of Casino Rock they unite traditional Mediterranean cuisine, the traditional home cooking, with the Hosper oven, Asian touches, travelling cocktails and a premium service.

Gathering Valencians from eleven in the morning will be easy thanks to the renovated space, with a spacious lounge and a cosy dining room, which will welcome those coffees with newspapers, the appetizers that end in snacks, the rice dishes that are so much our own or the American cocktails at the bar.  During the week, the menus will bring together price, quality and the flavour of a lifetime to make way for those special celebrations with which we like to entertain family and friends in the Casino Rock Privé area.

Casino Rock is a place to enjoy the Mediterranean diet that respects the product but that knows how to entertain with nods to Asian and fusion cuisine. It is a club with traditional service, in a cool atmosphere where market and fish market produce, meats and fish made with real embers or spoon dishes will all be served with care and elegance. Squid and cauliflower rice, electric melon soup, pulled pork fideuá, burrito sabanero, sautéed artichokes on poultry bechamel sauce are just a few examples.