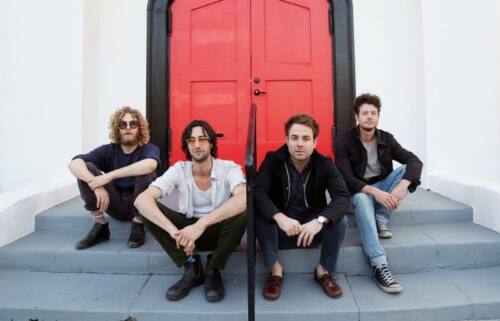 ##Folk-pop-rock elegance: ‘Dawes’ present their latest album in Valencia on October 25th at 16 Tonelades. The Californian quartet, who sold out all their concert tickets in Madrid months ago, arrives in Spain as part of the European tour of their fifth album, “Passwords” (2018). Catalan artist Xavier Calvet, former Bullit vocalist, will open the concert with songs from his second solo LP, “Crosswinds” (BCore, 2019). Dawes’ live performances, with charismatic vocalist Taylor Goldsmith at the head, are among those that leave their mark. They  inject euphoria into the audience and give them something to talk about. The followers of the Californian quartet will have the chance to check it out this Friday 25th October at Sala ‘16 Toneladas’  in Valencia; it will be the group’s second stop in Spain as part of the European tour to present their fifth studio album, “Passwords” (2018).

Dawes is a combo with  different influences. On the one hand, their folk-pop with an elegant acoustic base and sunny harmonies that takes us back to the scene of Laurel Canyon (Crosby, Stills & Nash, the first Neil Young and Joni Mitchell). On the other hand, their ‘Americana’ sound reflects the country-soul vibrations of Gram Parsons and the romanticism of The Band. Its’s a special sound and it leaves its mark.

Not in vain, their debut album was generated from jam sessions shortly after being formed with Conor Oberst (Bright Eyes), Benmont Tench (Heartbreakers) and Chris Robinson (The Black Crowes). That debut was titled “North Hills” (2009), old school rock sounding contemporary, more on the string of Band Of Horses than Fleet Foxes. The successor, “Nothing Is Wrong,” arrived in June 2011, with stellar collaborators from Jackson Browne and Benmont Tench (Heartbreakers). There the songs come a little closer to that “American rock’n’roll” – in their own words – that we associate with Bruce Springsteen, Tom Petty and Bob Seeger; Laurel Canyon takes a side step.

Since then, walking between those two worlds and with milestones such as having been chosen as the band to accompany their tours by Robbie Robertson and Jackson Browne, they have released four more albums – “Stories Don’t End” (2013), “All Your Favorite Bands” (2015), “We´re All Gonna Die” (2016) and the originally cited “Passwords” (2018) – getting everyone into the Top of the American rock and folk charts (in that sense, both “All Your Favorite Bands” and “We´re All Gonna Die” reached #1 in the folk charts), consolidating among the leading groups of their country of what we could call the new generation of classic rock-folk.

The ‘Dawes’ concert will be preceded by support from musician Xavier Calvet, former leader of the Catalan band Bullitt, who moved between genres such as indie rock, emo and melodic punk rock. His solo project began with “Firebird” (2017), an album that was impossible not to fall in love with, and continues with “Crosswinds” (B Core, 2019), a luminous pop work varnished with an American sound and that pleasant nostalgia that the chords transmit in an alternative country way…