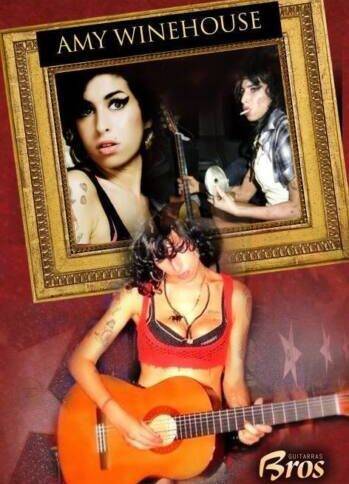 Based near Javea in the Valencia Community, ‘Francisco Bros’ guitars take about 2 months to make, using the finest materials from around the world. These family artisans work step-by-step taking care of even the smallest details, as their grandparents taught them more than 60 years ago. All of this to achieve 100% handmade guitars and with traditional Spanish techniques. The list of artists of all genres who use ‘Bros’  guitars is impressive and includes Ed Sheeran, Tom Hanks, Will Smith, Alejandro Sanz, Richard Gere, Carla Bruni, Leo Messi, Black Eyed Peas, Raimundo Amador, Diego El Cigala, Russell Crowe, Jeremy Irons, Tomatito, Vicente Amigo, Joaquin Sabina and more…

24/7 Valencia: Could you tell us about your involvement with Amy Winehouse?

GUITARRAS BROS: “The British singer Amy Winehouse, visited us at our workshop near Javea with her father, to buy a guitar at Francisco Bros. Amy Winehouse chose a guitar, after trying several of our guitars. She and her father spent several hours in our workshop. Her father is on record as having said that of the 50 guitars that Amy had in her collection, her ‘Bros’ Spanish guitar was her favourite.

A few days later, she began to write the lyrics & chords of what would be her new album ‘Back to Black’ in her father’s chalet in the Valencia region. With her Francisco Bros Spanish guitar in hand, she finished a number of key tracks of the album ‘Back to Black’. This album was the most important of her career as an artist, and one of the most important and best-selling albums in the history of music.

At the 50th Grammy Awards ceremony, ‘Back to Black’ won 5 awards. The album won for best pop vocal album, while “Rehab” won for best female pop vocal performance, song of the year, and recording of the year, and Amy Winehouse won as best new artist. The album was also nominated for album of the year. The album Back to Black was announced as the best-selling album in the United Kingdom in the 21st century by the Official Charts Company in 2011, after having sold 3.5 million copies in the United Kingdom. We are really proud to have been a part of her success!”

The tracks that Amy Winehouse composed on her Spanish guitar in the Valencia region included ‘Back to Black’ / ‘Me & Mr Jones’ / ‘Tears Dry on Their Own’ and ‘Addicted.’