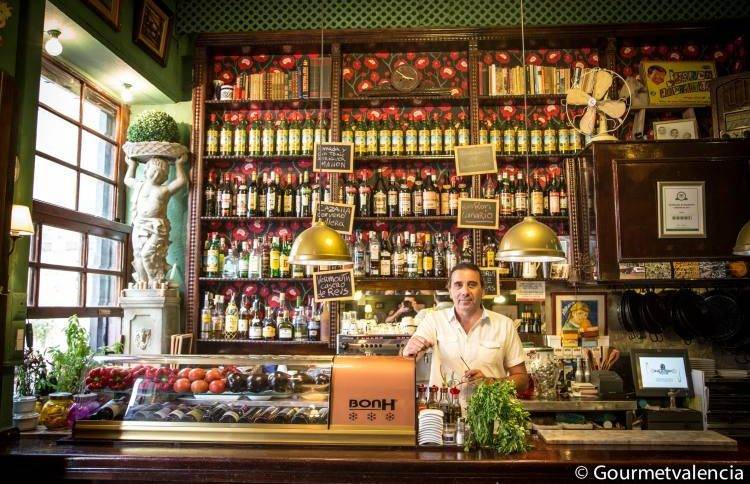 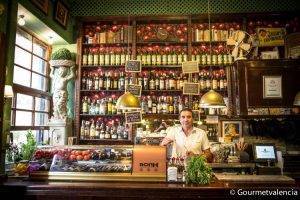 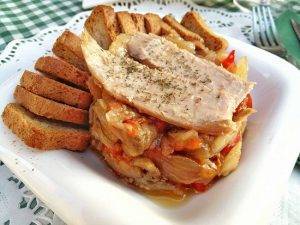 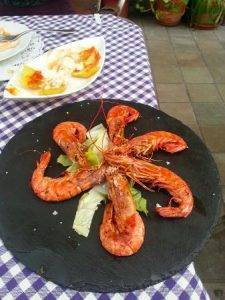 There’s a restaurant behind the Cathedral that was originally established in 1933 and has seen good times and bad over the years. It is now in a good phase, a great phase even. It is now proudly owned and run by Beni (José Manuel Benito), a great chef who has his fingers in quite a few of the culinary spaces in Valencia, including ‘Escuela de Arroces y Paella Valenciana.’

Before we go much further I should tell you that there’s no wifi at Bar Almudin but there is great Vermouth! Oh, and there’s no published phone number either so you can’t book ahead, just turn up! We did just that on a sunny Saturday with two good friends.

I can vouch for the Vermouth, no sooner had we sat down than four very generous glasses of this excellent local Vermouth arrived at the table! We ordered a bottle of Les 2Ces, a Utiel Requena wine from Chosas Carrascal. A fruity blend of Bobal, Tempranillo and Syrah and aged in oak (15€ a bottle), while we perused the menu and took in our surroundings. Bar Almudin is a small bar on two very low ceilinged floors – the walls are covered in photos of old Valencia and family photos, which Beni told me were of his own family over the years – his parents and grandparents and uncles and aunts.

We sat on the lower floor, a couple of steps down from the bar, and decided that we would all have the Menú Degustacíon (Taster menu. 16€ per person), which consisted of five starters to share, followed by a main course and dessert or coffee.

We started with a huge and lovely salad each, topped with boquerones (small cured fish). Then bread and a little pot of grated tomato and oil arrived at the table (Pan Catalan). We followed this with Valencian Clochinas – even though there was an ‘R’ in the month…rising sea temperatures are apparently responsible for extending the season of these smaller and sweeter mussels. They were excellent and slightly piquant, which was a surprise.

Next came a great favourite of all of us at the table – Escalivada(roasted red peppers, aubergine and garlic in olive oil served, in this case, topped with but quality Tuna) really delicious! M’s favourite came next – Patatas Bravas (brave potatoes! fried potatoes smothered in a garlic mayonnaise and a chilli tomato sauce). Albondigas de Abuela were served two to a little cauldron (Grandma’s meatballs in a rich sauce) piping hot and tasty.

Just when we thought we were finished with the starters Araceli, the manageress, arrived at the table with a little plate of freshly cooked croquetas de bacalao (cod and potato croquettes) which, though delicious, made us all seriously wonder if we were going to manage the main course!

After a little (enforced by us) wait, our main course arrived to the table. A large enamel cauldron of Arroz Meloso de Pollo, Pato, hongos y caracoles. This is a creamy rice, the word meloso means honey-like, with chicken, duck wild mushrooms and snails. When we had the paella class at ‘Escuela de Arroces y Paella Valenciana’, we were asking the chef Jaime why snails were disappearing from paellas. His answer was that most restaurants were leaving them out for the tourists so it was interesting that they were included in this delicious rice dish. We managed to almost finish it in spite of all we had eaten before – well, it was over a couple of hours or so!

We had another little break before desserts – Apple Tarte Tatin, Arnadi (a Valencian dish of roast sweetened pumpkin with almond flour and lemon zest – it’s traditionally served around Easter), Crema Valenciana (a ground rice pudding with cinnamon and brûléed sugar topping). All three were great but a struggle to eat…
We finished with a chupito of Mistella – a chilled sweet white dessert wine. A perfect end to a great meal.