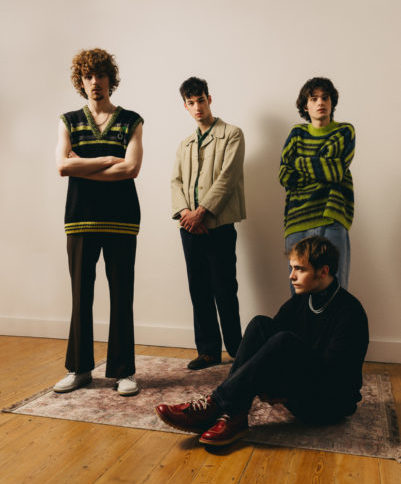 British Post-Punk band ‘The Lounge Society’ will put on their first shows in Spain this week with their Valencian debut this Wednesday November 9th at 16 Toneladas Rock Club. The group will be touring their debut LP “Tired of Liberty” which came out this August on the Speedy Underground, a sharp, energetic and modern brand of punk, giving a vision of a crumbling society spurred on by a lack of human connection.

The Lounge Society’s Spanish tour will feature a performance in Madrid on November 8th at Siroco Club, November 9th in Valencia’s 16 Toneladas, finishing up in Barcelona on November 10th at Razzmatazz 3.

The Yorkshire born group brought out their first single in the middle of May 2022 ahead of the album with the same name “Blood Money.” This song was constructed around a smooth riff and an expansive chorus as “a response to the culture of greed” as the band put it, accompanied by a hallucinogenic video directed by Alex Evans. This song speaks to the prioritisation of wealth accumulation in today’s society, even over spending time with the ones we love, “you see your boss, but not your mother or your brother.”

This was followed in July by the second single “No Driver”, full of anger, passion and furious rhythms and raising expectations after their long debut, already high because of the impact of their first three singles and their first EP “Silk for The Starving”, which gave listeners a sharp, energetic and modern Punk EP. This impact was built upon in recent years with their openers for acts such as; Warmduscher, Working Men’s Club, Katy J. Pearson and Penelope Isles. The Student Playlist wrote on this EP “these four tracks represent a wide display, with the instruments finding space to go crazy, something which never disappoints. The music is always fun and you never feel like you’re listening to the same song.”

Now they have brought out “Tired of Liberty”, with Dan Carey, founder of Speedy Underground, who also produced Wet Leg and Fontaines D.C. These two groups, along with the Fat White Family, have been identified by The Lounge Society as some of their key influences. With their defiant voices and politically charged and socially critical lyrics, The Lounge Society are making waves on the British Punk scene.  Let’s see how they do on the Spanish shore.

For more on the band: https://www.instagram.com/theloungesociety/