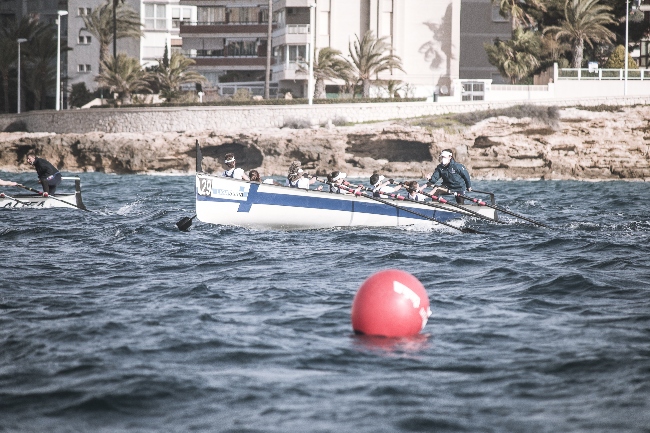 #Calpe witnessed, last Sunday (Feb 13th), the V Regatta of the SUMA Fixed Bank League of the Mediterranean, organized by the Rowing Federation of the Valencian Community. The event saw the start of the veteran and cadet categories; and the weather conditions prevented the rest of the races from taking place, so the regatta finished earlier than planned. The event was co-organised by the Real Club Náutico Calpe and the Federation, who did a great job to ensure that some of the races were able to start, despite the adverse conditions.

The veteran category had a total of 24 teams, who offered an example of effort and overcoming to complete the 700-metre course. In the women’s race, the victory went to Club Rem Denia, who stopped the timer in a time of 3 minutes and 48 seconds after applying the corresponding compensation. Their neighbours from Real Club Náutico Denia finished in second place and the representative of Real Club Náutico Gandía completed the podium. The final classification was very close, as the difference between the second and fifth classified was three seconds.

The men’s races were dominated by Real Club Regatas Alicante, who obtained a final time of 3 minutes and 22 seconds, almost four seconds behind Club Náutico Benidorm, second classified. Club Deportivo de Mar Clot de L’illot El Campello and Club Rem Denia finished the race with a similar final time (3:27′) and both teams achieved third place. This is the second victory of the season in the SUMA League for the women’s veteran team of Club Rem Denia and the first in the case of the veterans of Real Club Regatas Alicante.

The cadet men’s race was the first of this age group in the competition and was won by the Club Remo Torrevieja team, which is also placed as the first leader of the season in this category. The youngsters from Torrevieja finished the 700 metres in 3 minutes and 53 seconds, two seconds less than Real Club Regatas de Alicante, who finished in second position. Club Náutico Alicante Costa Blanca was third and Club Náutico Santa Pola closed the classification.

The next meeting of the Mediterranean SUMA Fixed Bench League will take place on Sunday 27 February at the facilities of the Real Club Náutico Valencia, which will host the sixth regatta. This is once again a great opportunity to enjoy one of the best regional rowing competitions in Spain.