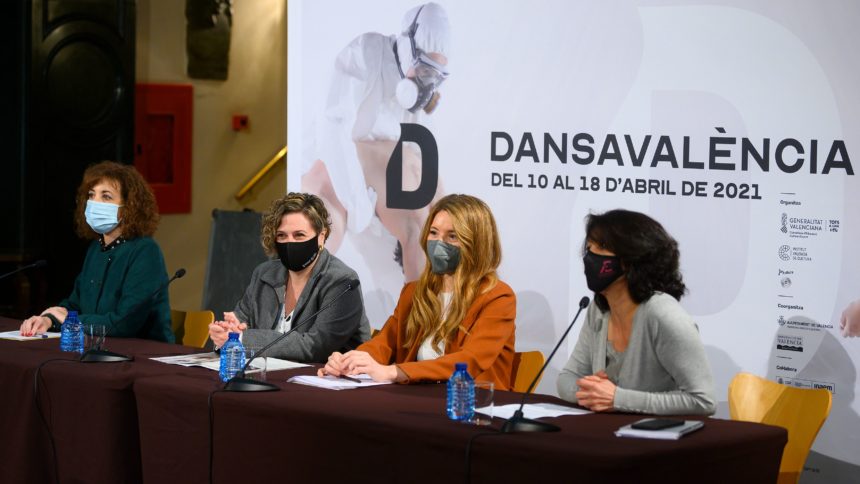 The event with the arts of movement hosts four world premieres.

The regional secretary for Culture and Sport, Raquel Tamarit, has presented the programme for the 34th edition of the Dansa València festival. The event, organised by the Regional Ministry through the IVC, will be held from 10th to 18th of April. The València City Council and the Diputació de València collaborate in this annual event that celebrates dance in 11 different venues around the city.

Also present at the presentation of the 2021 edition were the festival’s artistic director, María José Mora; the València City Council’s councillor for Cultural Action, Maite Ibáñez; and the director of the Teatre Escalante, Marylène Albentosa.

According to Tamarit: “The programme we are presenting today is the result of many months of management thanks to the joint work of transition between Mar Jiménez and María José Mora, who have produced an exceptional proposal in terms of quality and openness to new audiences of the leading dance festival in our territory”, and continued: “Dansa València marks the beginning of our live performing arts festivals for this year and demonstrates that with will, effort and enthusiasm it is perfectly possible to programme safely and in accordance with all the necessary measures. The public needs to breathe dance, the sector needs to show its proposals and our priority is to make all this possible”.

“We are celebrating an edition that, despite the health situation, maintains a very complete programme, with representation of Valencian companies and creators from other territories. Dansa València expands throughout the city, occupying theatres and museums, and preserves the sections for the dissemination and knowledge of dance. Our aim is for the public to enjoy the arts of movement and for professionals to be able to develop their work optimally in a year that is proving to be very complex for the performing arts sector,” says the festival’s artistic director, María José Mora.

This year, Dansa València is hosting the work of 25 companies, 10 of them from Valencia and 15 from the rest of Spain. Specifically, from Catalonia, Madrid, the Basque Country, Andalusia, the Balearic Islands, the Canary Islands, Extremadura and Navarre. A total of 34 performances have been programmed, four of which are world premieres.

Titoyaya Dansa (Valencia) will stage the premiere of its second inclusive dance show, ‘Soledad’, on 17 April at the Teatro Rialto. It is an intergenerational, multicultural and multidisciplinary work, consisting of a heterogeneous cast made up of older people, dancers from the company and young people formerly under guardianship in the process of emancipation.

Paula Serrano (Alcoy) has also given a social focus to her proposal, which in her case focuses on functional diversity. Antes de que todos lo sepan’, scheduled for 15 April at Espacio Inestable, is a scenic device that investigates how to create a choreography without using the sense of sight.

On 16 April at La Mutant, Mou Dansa (Valencia), in ‘Fake Life’, tackles what they themselves call “the disease of our times”, an expression they use to refer to the residual attention, self-deception, social imposition and appearance that prevail in contemporary societies.

For its part, Marea Danza (Valencia) premieres ‘Rebelión’ on the 14th of April at the Teatre Martín i Soler of the Palau de les Arts. This production by Teatre Escalante is one of the four that make up the Danseta cycle, developed in collaboration with the theatre centre of the Diputació de València.

They also come from València Taiat Dansa, who in ‘TRES de Ballet Triádico’ explore the possibilities and the visual, aesthetic, spatial and performative revolution of Oskar Schlemmer’s Triadic Ballet. Their contemporary revision of the emblematic piece will take place on 14 and 15 April at the CCCC.

On the 14th of April, the Sala Matilde Salvador will be hosting Lola Boreal’s (Valencia) ‘Rodem?’, a dance theatre piece that questions the social and personal view of wheelchair users with an acidic and humorous outlook.

The rest of the companies from the Comunitat Valenciana in this year’s festival are La Coja Dansa (Valencia), whose production ‘El cuento de Persépolis’ forms part of Danseta, and CocinandoDanza (Valencia), Compañía Marroch (Alicante) and Tangen|Benzal (Ontinyent), which form part of the Moviments Urbans cycle, where a total of eight companies will serve as an appetizer to the festival on the weekend of the 10th and 11th of April. The proposals, initially planned for open-air spaces, have been moved to the Museu de Belles Arts and the CCCC as a result of current regulations on the use of urban space.

This year’s selection includes four national dance prizes. Within Moviments Urbans, the solo ‘Bach’, by the company Mal Pelo (Girona), who received it in 2009, is programmed. The choreography of ‘Rebelión’, by Marea Danza is signed by Olga Pericet, who received the highest award from the Ministry of Culture in 2018.

Israel Galván (Seville), winner of the 2005 award, will perform his solo ‘El amor brujo. Gitanería in one act and two scenes’. Alone, and with only the vibration of the piano strings and the singing of David Lagos, the bailaor transforms one of the most emblematic and international pieces in the history of Spanish music into movement.

Daniel Abreu (Canary Islands), winner of the 2014 National Dance Prize, also performs a solo. The Teatre Rialto will be the stage where on 14 April he will dance ‘El hijo’, where through the poetics of image and sound he reflects on the experience of filiation, the relationship with natural cycles and systems.

Other award-winning shows scheduled for this edition of Dansa València are ‘Filia et Fobia’, by La Taimada (Barcelona), first prize in the 34th Madrid_2020 Choreography Competition, and ‘Trama’, by Roser López Espinosa (Barcelona), best choreography 2019 in the 22nd Critics’ Awards. The former are scheduled for the 17th and 18th of April at the Espacio Inestable and the Catalan dancer and choreographer, on the 17th of April at the Teatre Principal.

Finally, the performers of Raquel Klein’s (Ibiza) ‘Wu Wei’, Blanca Tolsá and Jacob Gómez, won the award for best dance performers at the Butaca 2020 Awards. The choreographic piece, scheduled for 18 April at the Teatre Principal, investigates time and its perception.

Emotions of the present

“In this edition of inevitable change for audiences and creators, we invite you to lose yourself in a web of emotions where phobias and insecurities, loneliness and emptiness are given space. There is no rest for the movement that wants to express pain, beauty and commitment to the reality we experience”, says the artistic director, María José Mora.

The echoes of the convulsive present we live in are expressed in shows such as ‘Kenophobia’, by Osa+Mujika (San Sebastián), which on 15 April translates the irrational fear of emptiness into a choreography in which its protagonists will show their fears to the audience, to whom they will shout and with whom they will celebrate their traumas.

Chey Jurado & Akira Yoshida (Badajoz, Pamplona), both from urban dance, will perform the duet ‘Hito’ on 18 April at the Claustre de La Nau, about beauty and the horizons that open up in loss.

Finally, both Núria Guiu (Barcelona) and the collective Kor’sia (Madrid) will be exploring the emotional consequences of a hyper-connected society. The Catalan, who in addition to being a dancer and choreographer is a student of anthropology and an iyengar yoga instructor, questions in ‘Spiritual Boyfriends’, scheduled for 18 April at Carme Teatre, the role played by the Internet in relation to the divine, to immateriality, to love, to power, to neoliberal policies and their techniques of social control and surveillance.

On the other hand, the Madrid-based company update the romantic ballet icon par excellence, ‘Giselle’, in a contemporary dance proposal that deals with love in the era of emotional obsolescence. The date with love and heartbreak in our times is on the 14th of April at the Teatre Principal.