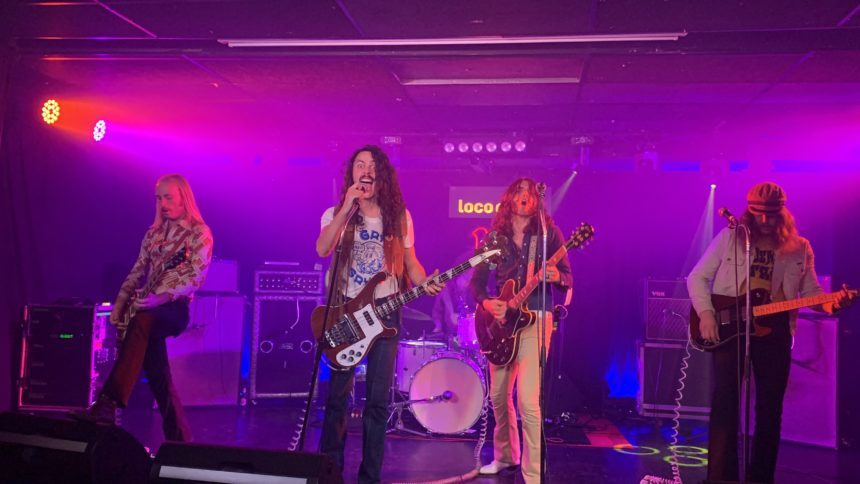 If you walked into a bar and saw five men on stage in tight flares, colourful shirts, with long hair and sporting mutton chops and moustaches, you might be forgiven for wondering what time portal you’d just stepped through. However you would in fact be seeing psychedelic french rock band ‘Komodor’, who graced the stage at Valencia’s ‘Loco Club’ on the 24th of October.

At first I cringed at the clear emphasis on the retro, thinking that this would be yet another tribute act to 70s rock, trying very hard to recapture the aesthetic of the era while bringing none of its energy, and worst of all, bringing nothing unique to the stage. I was happy to be proven wrong.

From start to finish Komodor gave the audience not one moment of rest. Song after song pumped through the speakers, infecting all who heard with the desire to rock. As long hair flew around the stage as the band thundered through its opening numbers, I, a proud member of the 21st century, got a brief insight into the sound of the 70s. It was glorious.

If it was an insight for me, it was pure nostalgia for the rest of the audience, predominantly members of an older generation, transported back to their youth by Komodor’s sensational performance. Elrik Monroe’s rolling drums had the audience, including me (right at the front) jumping and pounding the air, spurred on by the unbounded energy of lead guitarist Goudzou. In a pause between songs, Goudzou led the crowd in a chorus of “Que Viva España,” which went down very well with the public.

So often we see talented musicians on stage, playing and singing well, but with no passion, movement or presence. This cannot be said of Komodor. All were consummate performers, moving round the stage, headbanging and all things metal, while not missing a beat.

This energy built constantly throughout the performance, from guitarist’s Ronnie Calva’s impressive splits in tight trousers, to Komodor’s front man Slyde Barnett jumping into the crowd, guitar in hand, rocking as he went. He took so many strolls into the crowd that at one point it looked like he was about to walk out the front door. Lucky for us he returned and his rock filled wanderings culminated with an electrifying guitar solo from the top of the bar while the audience looked on in awe.

For me however, the standout performance came from guitarist Melin ‘le Bigot’. While all the rest of the band limited themselves to one instrument, Melin was not constrained in his musical prowess. Switching constantly between acoustic, electric guitar and percussion instruments, this man was a Jack of all trades, but mastered all of them. For me the highlight of the show was Melin’s impassioned tambourine solo at the front of the stage:  not something you expect to see at a rock concert. Gymnastics did not seem to be beyond his reach either, pulling off an impressive headstand while posing for a post-gig photo.

Due to the fact that the band performs in English rather than their native French, some of the lyrics were lost in translation and the passionate energy of the performance. However my only complaint was that this show ended so soon and so abruptly. To the cries of “One more song” from the energised crowd, Komodor glided down from the stage at 11:30h. Not bad for a Monday night.

So far this group has splashed down in Barcelona, Zaragoza, Madrid, Estepona, Granada, Valencia and Bilbao as part of their Spanish tour to promote their new album “Nasty Habits”, which dropped last year. Check their tour dates and see if they are performing near you. Komodor is definitely a band to watch.