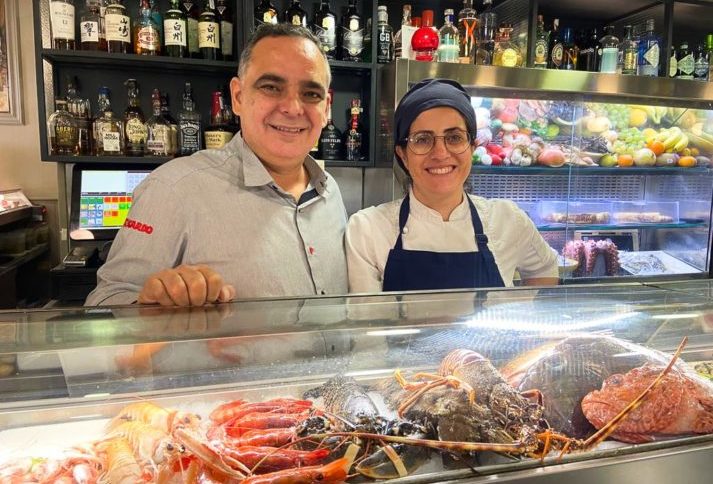 ‘BAR RICARDO’ CELEBRATES ITS 75TH ANNIVERSARY, THANKS TO RICHARD AND SUSANA, ITS THIRD GENERATION OF RESTAURATEURS!

High quality products, a professional team and a kitchen open all day long are some of the reasons for its longevity. Fresh seafood along with patatas bravas, Russian salad and cuttlefish with mayonnaise are its bastions of identity. The Ricardo bar has established itself over the last few years as one of the busiest ‘classic bars’ in the city.

‘Bar Ricardo’ celebrates 75 years since Mrs. Amparo González and her husband, grandparents of the current restaurateurs, opened its doors at C/ Dr. Zamenhoff, 16  in Valencia. Three generations of restaurateurs have passed through its kitchen, a family saga that began with a wine cellar where wine and liquors were sold in barrels.

Today, Ricardo Mirasol, known to all his customers as Richard and Susana Salvador, grandchild of the founder, continue to reap success in what is today one of the most important consolidated bars in the city, where every day – from Tuesday to Saturday – neighbours from the neighbourhood, executives, sportsmen and women and various figures from Valencian society meet every day.

Founded in 1947, the Bar Ricardo is already part of the city’s history. Located in the Petxina district, it has been a witness and protagonist of political, social and economic changes, and also of a pandemic that put its trajectory in check with an unexpected closure, from which it has emerged stronger.

The idiosyncrasy of ‘Bar Ricardo’ is its product and also its know-how: “We pride ourselves on being a democratic bar where any diner who loves fresh produce and the most traditional tapas has a place. Susana and I have taken great care to respect the concept proposed by our ancestors, based on quality and proximity”, explains Richard. “For us, being here 75 years later, receiving the affection that everyone who comes to our house gives us, is the result of humble and honest work”, explains Ricardo Mirasol, the bar’s manager and head waiter.

Top quality seafood and vegetables from the Valencian ‘huerta’, the keys to Bar Ricardo’s bar

Every year, thousands of portions of bravas, ensaladilla rusa and cuttlefish with mayonnaise, the three signature dishes, leave the kitchen and the bar of Bar Ricardo. But seafood occupies an important position in the orders and in the cash register. Sea urchins, scallops, clams, mussels, clotxinas, striped prawns, tellinas, lobster, razor clams and oysters are all available here.

And of course, there is the octopus, a dish that, according to Richard’s memories, was a pioneering introduction by his parents, who turned it into one of the essential products and protagonists of the restaurant. Hence its logo: an amusing and now historic octopus.

“Around the 1980s, my parents started cooking the octopus whole and started serving it on a board, it was something that attracted attention at the time and now it’s a bar classic,” recalls Richard.

Along with the seafood and fish, there is also produce from the garden. Tomatoes and artichokes from the land, from Kilometre 0, share the limelight in front of the public, making room in the kitchen every day for their loyal diners.

From snails and allipebre, to artichokes with foie gras and Formentera-style lobster, tradition and avant-garde in the kitchen.

Under Susana’s hand in the kitchen, the bar has inherited local tapas such as snails, allipebre and broad beans, and has been proposing other novel and also very popular ones.

The artichokes in tempura with truffled egg and foie gras, sea urchins au gratin, Formentera-style lobster and boletus carpaccio are among the latter.

Exceptional service, with waiters who follow the golden rules of the trade, is another of the house’s hallmarks. This unblemished attention is achieved, according to the couple, by the close treatment, the respect and dignity they confer to the hotel profession, and the intangible values they offer to the members of the team, whom they consider to be family.

And the secret is…

No gimmicks, no trickery, what has made Bar Ricardo possible, in the words of its current managers “is that it has been run by three married couples, three couples who are involved to the core in the bar. This would not have been possible if I hadn’t run it with my wife”, confesses Richard.

Susana has drawn on the family’s wisdom to prepare unforgettable torrijas and cheesecakes. Together with Richard, they are inseparable companions on expeditions made on purpose to get to know what is cooking in other bars and on trips that are not complete without a gastro tour of the best of each place.

The chef acknowledges that “women in the kitchen are becoming more visible lately, although they have always been there. In the history of gastronomy we have not been as recognised as men, cooking was more of a domestic task than an art. Fortunately, all this is changing and this is boosting female talent”, adds Susana.

As to whether there will be a fourth generation, everything points to yes. In her kitchens and at her bar, the generational handover is already underway. One of his sons is already helping his mother behind the scenes, while another is preparing to work in front of the public.

It seems that the story of ‘Bar Ricardo’ will continue…