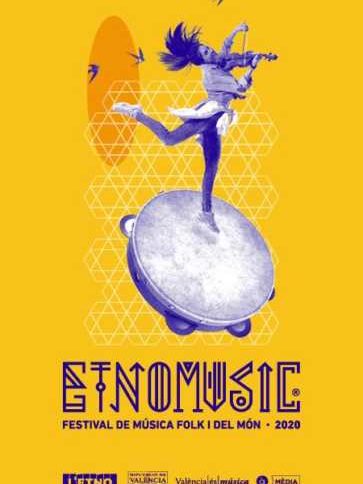 ETNOMUSIC FESTIVAL: Over the years, L’ETNO at Museu Valencià d’Etnologia has become a reference point for Valencian folk music and the world. After the success of previous editions, with more than 2000 spectators, the museum presents again the FESTIVAL ETNOMUSIC, a proposal that in 2020 will celebrate 17 years of history.

The ETNOMUSIC FESTIVAL is part of the cycle of cultural activities related to traditional culture and cultural diversity that the museum organises every year. The project aims to present traditional Valencian music from a contemporary perspective, and to publicise musical proposals from all over the world that link tradition and innovation. Two characteristics that are linked to the way in which L’ETNO at Museu Valencià d’Etnologia approaches the dissemination of traditional Valencian culture: a rigorous reading of the recent past from the perspective of the present, in which popular and traditional culture is conceived as a living and changing heritage maintained by the community.

One of the novelties of the festival is the collaboration agreement established by l’ETNO at Museu Valencià d’Etnologia de la Diputación de Valencia with APUNT TV. The agreement will contribute to the dissemination of folk music and world music, with special attention to the musical fabric of our territory.

Likewise, this agreement will allow the festival’s audiences to be expanded through its television broadcast, at a time when there are significant restrictions on seating due to the establishment of the new normality (social distancing).

Affected by the COVID-19
The crisis caused by COVID-19 has significantly affected the live cultural activities sector: music, theatre and also guided tours of exhibitions or conferences have been cancelled due to the health crisis. This has forced institutions to modify and digitize their programming.

In the case of ETNOMUSIC, the establishment of the state of alarm prevented its implementation in the usual months of May and June. Faced with this situation l’ETNO. Museu Valencià d’Etnologia opted not to cancel and postpone the festival, with the aim of supporting the music sector, at this time of particular difficulty, and perform, as far as possible, live concerts (with restricted capacity), in order to maintain the commitment that the festival has with an audience that, over the years, has maintained its loyalty to the festival by attending every year.

Thematic proposal
Over the last few years, the festival has been organized with a specific thematic criterion. In the past editions, there were proposals organized around intercultural dialogue (2018 edition) or territorial variety (2019 edition). In the year 2020, Iberian music has been taken into account. Therefore, unlike other years, ETNOMUSIC 2020 does not include world music groups or international groups. In 2020, the museum has opted for the presentation of groups that show us flamenco (Maite Martín), percussion music from central Spain (COETUS), traditional music from the Basque Country (Korrontzi), Valencian and Mediterranean music (Xavi de Bétera and Mara Aranda) and music with roots in Murcia (Juan José Robles). The programme will be held between 2 and 23 July, with the following times:

Tickets can be collected from the Tuesday before each concert (maximum 2 tickets per person) in the lobby of L’ETNO. Museu Valencià d’Etnologia or through the website. Access is free until full capacity is reached.

For reasons related to the COVID-19, the concerts will have limited capacity in order to maintain the health and safety recommendations established for the new normality.

This essential voice of Mediterranean folk rescues from oblivion, with this show, the medieval troubadours and poets. With its repertoire of universal content, it invites us to review the concept of love through the centuries, as well as the role of women in its conception, experience and transmission.
In Trobairitz we will find songs whose composition dates back to the 12th century, which speak of the love of one woman for another, of infidelity, of the reflection of being a woman enslaved in marriage, or of choosing to retire to the monastery, where she dedicated herself to literature and writing.
Mara Aranda is one of the most internationally renowned Valencian interpreters. Behind her, she has carried out a tireless research work that has led her, for three decades, to explore and perform Valencian, Turkish, Greek, Occitan, ancient, medieval and Sephardic music. This work has resulted in nearly twenty albums that have earned her the recognition of both the public and the critics.
https://muvaet.dival.es/es/content/concierto-mara-aranda

Founded in 2004 by the trikitixa performer Agus Barandiaran, this Basque folk band was created with the aim of modernizing the traditional music of their land. Keeping as protagonists the trikitixa and other traditional instruments such as the txalaparta or the alboka, Korrontzi intends to make Basque music and its ancestral sounds more contemporary, without ever forgetting the absolute respect for tradition.

Using more modern musical styles, as well as the help of instruments such as mandolin, electric bass, double bass, or percussions, these musicians achieve a new sonority that distinguishes them and makes them unique. Their live, energetic and powerful, will show us the sounds and colours of the Basque Country.
After taking their language, dance and music all over the world, and participating in major festivals in different countries, Korrontzi have been awarded prizes and mentions such as World Music Charts in 2014, 2015 and 2016, Top100 Roots Music Report (2015), Womex Official Selection (2014), as well as Best European Band, Eurofolk (2009) and Best Band on the Peninsula, Navelgas (2007)”. Now, they visit us at ETNOMUSIC 2020 to offer us a show that will not leave us indifferent.

With Memento, Mayte Martín offers us a show of music and singing with which she shows her respect for flamenco.
“I have never found a term that better defines my relationship with flamenco, that so aptly names this engine that drives me to worship the past, this religious respect that I profess for flamenco and for those who have made it the treasure I venerate. To honour it is what I want. And that is why I put my sense of decorum and freedom at your service. In equal parts. The first to contribute to rigorously preserving its precepts, which are given by an ethics and aesthetics that are a sacred heritage; the second, to put all my creative, imaginative and emotional capacities at its service, to be a vehicle that connects the past with the present, to search within myself and give light by resonating with the ancient echoes that speak with my voice”.

An essential singer on the national scene, Maite Martín is also a guitarist and composer. Her eight albums back up her indisputable talent, which has led her to explore and mix genres such as flamenco, boleros, poetry and love songs. She has received numerous awards, and has even been nominated for the Latin Grammy Awards.
https://muvaet.dival.es/es/content/concierto-mayte-martin

THURSDAY, 16/07.12:45 H. XAVI DE BÉTERA. COMPANIES
Xavier Benedito Casanoves, better known as Xavier de Bétera, is a young singer of cant d’estil valencià who, in recent years, has become the spearhead of a new and luminous generation of singers who ensure the survival of this valuable heritage.

After twenty years of streets and stages and having been the first teacher of cant valencià in a music conservatory, Xavier undertakes a new challenge in his career: to record his first solo album.

The artist from Bétera faces up to the game he is presented with, with a winning hand of cards: a carefully chosen repertoire, the wise guidance of Paco Lucas and Néstor Mont – musical directors of the proposal and authors of polychrome and expansive arrangements -, a list of collaborators simply overwhelming where we find some of the most significant names of the peninsular folk: Kepa Junkera, Eliseo Parra, Vanesa Muela, Pep Gimeno Botifarra, Carlos Beceiro, Efrén López, Tóbal Rentero . …and, finally and above all, a prodigious voice that moves between ancient and modern traces, armed with talent and intuition.

Coetus is a daring project of an Iberian percussion orchestra. Defining the proposal is as simple as that. Although, as always, the background that supports it goes much further than a quick and brief definition like this would suggest.
In the Iberian Peninsula we have a collection of percussion instruments, most of which are little or not at all known, that have been used throughout history to accompany the songs, romances, processions, parties and dances of the different towns in our geography. Instruments such as tambourines, reeds, zambombas, drums and various “tabales” or everyday items (jugs, mortars, pots…),
Coetus’ proposal works with the sounds of all of them to create a new and unique language, inspired by traditional rhythms and dialogues with the voice.
https://muvaet.dival.es/es/content/concierto-coetus

THURSDAY 23/07. 20:15H. JUAN JOSÉ ROBLES. IN-QUIET
Voted best European folk music album 2019 by Word Music Central magazine, Juan José Robles is undoubtedly a current reference in string folk music in the southeast of Spain. Endowed with an extraordinary sensitivity for composition, and with a different way of seeing traditional music, he began his journey at a very young age, in rondallas and folk groups in Alhama de Murcia, his home town. Since then, he has developed a long musical career in which he has collaborated with Malvariche or Mujeres Con Raíz.
In this concert we will have the opportunity to see how Juan José Robles extracts from his instruments (mandolin, lute, octavilla, bouzouki, guitars and guitars) those very personal melodies that serve as a speaker for his emotions.
https://muvaet.dival.es/es/content/concierto-juan-jose-robles