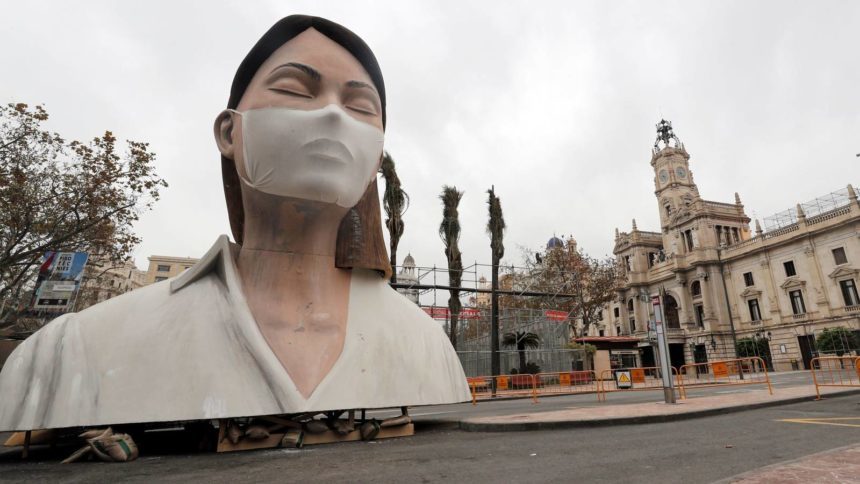 A Fallas conversation between a Tourist and a Valencian!

Brian: Wasn’t that ‘Fallas’ in ‘Mission Impossible II’, in that scene when Tom Cruise’s character is in Spain? I love all that fire dancing and those evil-looking hoods.

Viçent: What are you talking about? That was just a ridiculous juxtaposition of Fallas and the Holy Week celebrations. I ask you! Falleras and Nazerenes all mixed together. Having said that Tom Cruise’s warped vision may well just come true. Holy week normally starts a few weeks after Fallas finishes (with the exception of Fallas 2021) so you may well see some Falleras quick-changing into Mary of Magdelenes and Falleros in their Easter Ku Klux Clan get up in 2022.

B: Is it true that in Fallas people eat a breakfast of dough balls, deep-fried in week old fat and covered in sugar?

V: Buñuelos are a true delicacy and very typical during this wonderful festival period.

B: Well, they don’t sound all that healthy to me.

V: Perhaps not, but they are probably healthier than that dodgy vodka you’ll be drinking out of a paper cup at the verbenas every night.

V: They are street parties with open-air bars, and many Fallas put up a stage and hire an “orquesta” for entertainment.

B: Orchestra. Oh, I like a bit of nice soothing classical music.

B: Right. I´ll be needing that vodka then. Is that the only music available?

V: No, of course not. There are all kinds of concerts and special nights at clubs organised for Fallas, but also each Falla hires a marching brass band to accompany them around the city. Generally they play one of two traditional songs over and over again through the day. Then in the evening, after a few drinks, they loosen their ties and turn into a Valencian take on a Dixieland Jazz band.

B: Sounds great. With all that going on, I suppose I’ll be going to bed late. I’ll have to catch up on my sleep during the day.

V: Sleep? During Fallas only the deaf and the very drunk sleep. First of all at 8 o’clock in the morning you’ll be woken by the “despertá” (one of the few things in the whole week that will actually be on time).

B: “Despertá”? Not more “buñuelos” surely?

V: No, they don’t bring you any breakfast but they do send you a chorus of sweet little children to wake you from your slumber with a load of unbelievably loud bangers and out of tune brass band music.

B: Oh, that’s nice of them. I know, I’ll wait till the “despertá” has finished and then go to bed.

V: Look, believe me; just forget about bed until Fallas is over. Put on your “blusón” (that black cape thing off-duty Falleros wear) and get down to the “Plaza del Ayuntamiento” to find yourself a prime spot just in front of the post office building for the “mascletá” fireworks.

B: Fireworks. Umbrellas of colour lighting up the dark night sky.

V: It’s not about lights and colour, you’re thinking of the Castillo, these are the daytime fireworks. They’re all about sound and fury. We Valencians talk passionately about the rhythm, tone, pacing and sheer music of the “mascletá”. I always nod sagely but to be honest all I can hear is a chaotic series of loud bangs.

B: Not that Latin Pop music again!

B: So, who are those women with the Princess Leia haircuts?

V: Strangely enough, they have nothing to do with Star Wars. They are the Falleras, the women from the nearly 400 Fallas around the city. Each falla chooses a Fallera Mayor and one of them is chosen the following year to be the Fallera Mayor de Valencia.

B: So is the chosen one the most beautiful woman in Valencia?

V: Not necessarily but she’ll have to be prepared to spend a lot of money on all those dresses.

B: And to grease a few palms in order to get elected.

V: I didn’t say that. Let’s just say she makes a big contribution to the Falla. The important role of the Fallera is to take part in the real centrepiece of Fallas: The offering of flowers by each Fallera to the Mother of God in the Virgin Square, outside the Basilica.

B: Oh, I see a simple, solemn ceremony of piety for the devoted.

V: Well, not exactly. They spend hours doing their hair and make up, they put on their family’s best jewels and an extremely colourful dress and swan around the streets of Valencia to the tune of lively brass band music. Each falla competes with the next to see who can offer the largest and most ornate flower arrangement. It’s a grand spectacle that brings a tear to many an eye, especially if local TV cameras are around.

B: Hmm, I think I might give that a miss.

V: You won’t be able to get away. All the roads will be blocked, there’ll be no buses and the underground will be packed. Just find yourself a bar with a nice terrace and sit back and smell the roses. You could even go and have a look at the wonderfully satirical Fallas dotted around the city.

B: What’s so satirical about a duck coming out of a teapot? Only joking. How long do they take to build them?

V: In the past they used to do it in one day but nowadays artists are working on some of them for more than a year.

B: Oh yes. I like that one they are building near the “Palacio de Congresos”.

V: No Brian, that’s the new Valencia football stadium. Soon to be the best second division stadium in the world, the way the team’s going at the moment.

B: My mistake. So they take a year to build and then they burn them down, don’t they?

V: But that’s the whole point and the very heart of the festival, culminating in everything burning away in the purifying flames.

B: Ah, now I’m getting it. It’s the festival of light, sound and flowers par excellence. The symbolic washing away of the bad spirits of the dark Winter and the welcoming in of the new hopes and dreams of Summer, tracing its majestic roots back to the ancient rites of Spring. It’s just that this year, due to the COVID situation, Fallas 2021 will be held in September…

B: So where will you be for Fallas?

V: i’ll be up in the mountains in Mora de Rubielos, taking it easy with all the other Valencians.

B: Are you serious?

V: Only joking, I’ll be in Bar Pana after the Castillo.

B: See you there then!

Please note that 2021 Fallas may not have all the festivities included in this article due to the COVID-19 pandemic.