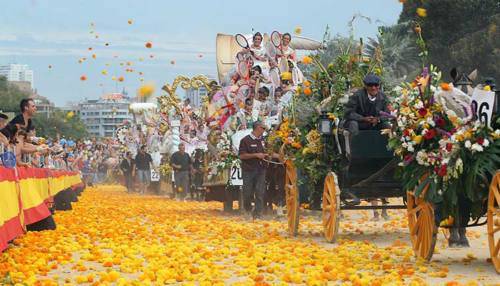 FERIA DE JULIO VALENCIA… ALL THE FUN OF THE FAIR

Valencia’s Feria de Julio will be 150 years old this year. Once again, for the whole month of July, the Viveros gardens will be rocking to music you only usually find on a second-hand record stall, people will be glugging down horchata and throwing flowers, and kids will be eating candy floss and having their faces painted. It’s good, surprisingly low-key, hot summer fun and it has a grand old history.

The first Feria de Julio took place in Valencia in 1871 from the 21st to the 26th July. It was to be a festival of the new middle classes in a city which had just thrown down its medieval walls and was figuratively and actually breaking free of its past and looking forward to a new economy of industry, mass agriculture and export. This was a brave new steam-powered and high-financed world with its own new plush areas of the city like the Ensanche and the Gran Vias and its own magnificent cathedrals to commerce, the Estación del Norte, the Central and Colón Markets and the Clock Tower building at the port.

The newly rich business classes were desperate to make Valencia a modern, cosmopolitan, European city. It was only a matter of time before the powers-that-be sanctioned the establishment of a City Fair and Exhibition. Traders and farmers were pushing for the creation of a fair where their wares and the products of the new Valencian industries could be exhibited. In turn, the Ayuntamiento wanted to keep the richer families in the city for as long as possible before they went off to their country houses or on their European Tour. The well-heeled families wanted a chance to meet and greet and show off their wealth. A Mary Poppins style “Jolly Holiday” was seen as the perfect opportunity to swan around in a big hat, a frilly dress and a parasol, and so the ‘Feria de Julio’ was born.

These first ferias included various agricultural shows; livestock in the river (between the Puente de la Trinidad and the Puente Real) and fruit, vegetables and flowers in the Viveros Gardens. There were also exhibitions of the latest products manufactured by Valencian industry at the newly built Medicine faculty at the beginning of what is now Avenida Blasco Ibáñez and art exhibitions in the old Convento del Carmen, now the Centro Cultural del Carmen. On top of this you could also attend bullfights, or take part in a carnival parade or a shooting match, watch a Tug-of-war competition for cart horses. Of course, this being Valencia, there was a firework display every night in the Alameda.

All the big names came out; Cirilo Amorós, the Marqués de Campo, the Marqués del Turia, Felix Pizcueta (in short, most of the big bods who named streets after themselves around the Ensanche). From the world of the Arts: Sorolla, Benlliure and Blasco Ibáñez all supported the event, making it a must on the Valencian social calendar. Great ornate pavilions were constructed along the Alameda by the Ayuntamiento and different well-to-do societies like the ‘Ateneo Mercantil’ and the ‘Real Sociedad Económica de Amigos del País’. This was the real heart of the whole event, where the people that mattered could take a stroll and the young debutantes could dance and cool off with a horchata or a barley water.

Over the years modern attractions were added, such as tournaments involving the newly imported sport of football and regattas and swimming races across the port. In 1907, there was even an air race from Valencia to Alicante for those magnificent men in their flying machines.

One of the mainstays of the festival, the battle of flowers, or to give it its rather grander official name the ‘Fiesta Floreal Valenciana’ first took place in 1891. The daughters of the wealthy families of the city were paraded along the Alameda in carriages where the discreet but seriously passionate young gentlemen of the time (only those from the right families) would throw them flowers and read them (usually embarrassingly awful) romantic poetry. The whole thing was originally devised by Don Pascual Frígola… just for the chance to parade his daughters in front of the Great and the Good along the Alameda. The tradition survives to this day.

By 1939, after the Civil War, the old confidence was gone. There wasn’t any money to throw around and the old class structure was disappearing. Any show of ostentation like the old style Feria de Julio was frowned upon. That should have been the end of it but somehow the Feria hung on. Things, however, had to change. The pavilions were still set up in July along the Alameda throughout the years of the dictatorship but they became much less exclusive, no longer attracting the elite of society and were open to all. These new pavilions were more likely to be run by the local Fallas or neighbourhood associations than by the top-hatted paternalistic societies of before. The grand old Ayuntamiento pavilions became woodworm-ridden and unsteady and, eventually, declared unsafe. They were left to decay in the Viveros gardens until they were finally destroyed by a fire in 1981, a testament to the Feria’s steady decline from its turn of the century heyday.

The main site of the Feria was moved from the upmarket Alameda out to Avenida de la Plata in 1974 and was shunted around different parts of the city. The great shows of yesteryear, just like the social classes that spawned them, fell into decadence or all but disappeared. That said, Valencians in their fifties and beyond may still remember with certain nostalgia partaking of a cool horchata, in one of the creaky old pavilions on a hot July night, with Nino Bravo blasting out over the loud speaker.

Little now remains of the old Feria de Julio. The tradition of the battle of the flowers is one of the few aspects of the original ferias which have survived, although these days it’s just a load of people having a laugh throwing flowers at some other people going past on a carriage…and there’s absolutely nothing wrong with that!

We also still have those two essential staples of any Valencian festival, the fireworks and the brass bands. There are art exhibitions and bullfights and at the heart of the modern Feria are the concerts in the Viveros. Primavera Sound it is not. Some of the acts seem to be chosen by middle-aged politicians and civil servants trying to relive their youth, hence the appearance over the years of Bob Dylan, Joan Manuel Serrat, the Beach Boys, Iggy Pop and Pat Metheny. That said, these are big acts and the atmosphere at an open-air gig on a balmy night in July is worth sampling.

They generally try to give you a little bit of everything and this year you have the usual mishmash of genres. In 2021, due to COVID restrictions, there are more Spanish artists than ever.

There are also regular, more barrio-related, lower key events in the Parque del Oeste, the Jardín de Ayora and other parts of the city. These include children’s theatre, traditional dance groups and a medieval fair selling medieval kebabs, medieval lampshades, scented candles and pulpo a feira. The evening in the barrios often ends with the ubiquitous sound of a verbena band thumping out Pasodobles and Coplas at window-rattling decibel levels, late into the night. Not sure what the Marques de Campo would have made of that. ¡Viva la Feria de Julio!

For more information in English about all the activities related to Feria de Julio go to: https://granfiravalencia.com/en