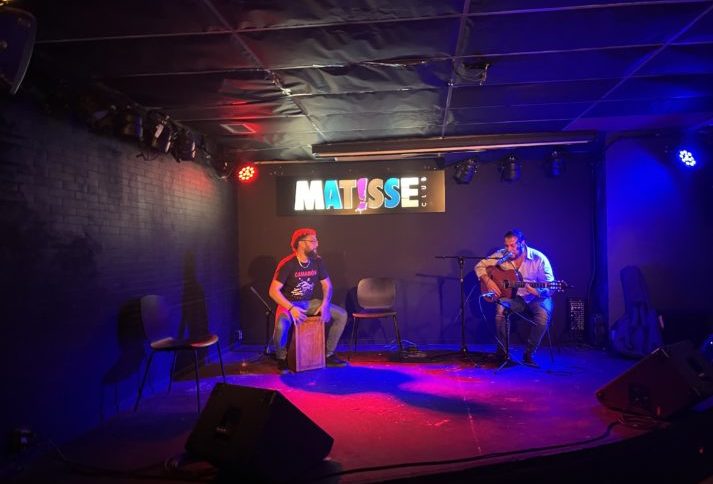 If you’re an avid flamenco lover, or just looking to soak up some Valencian culture, then ‘Flamencura’ at Matisse Club in Blasco Ibañez is the place for you. Matisse club unveiled a new night last week with Wednesday night flamenco, consisting of a one hour show and a jam/open mic segment. The latter was a completely new experience, for as all I had seen of flamenco in the past was in arranged shows.

The show was performed by Tomas de los Cariños Jr as the singer, Dani de Francisco as the dancer and Juanjo Amador on the guitar. Tomas and Juanjo collaborated beautifully to begin the performance, voice and strings complimenting each other beautifully as they rolled through fandangos, tangos and bulerías, accompanied by the rhythmic claps and stamps of the crowd.

The crowd participation of this event added another layer to the music, giving it a greater depth and emotion than what one would see at a theatre performance of flamenco. It created a connection with the music and the performers, but also with the rest of the audience, as we all strove to keep in time with each other. This is not to say that everyone clapped the same beat, there were often two or three different rhythms occurring in unison. However, rather than causing an unordered cacophony of sound, they complimented each other adding yet more layers to the music.

After about half an hour, in response to Juanjo’s call of “Dani, ¡venga!” (come on Dani!), the dancing portion of the night began. Complete with black and white spotted shirt, black waistcoat and flamenco shoes, Dani de Francisco entered the scene. Long curly hair whipping around his face, he began to dance, stamping, clapping and twisting to the music. His high heeled shoes stamped out the rhythm of the song, while he used his whole body as a percussion instrument, slapping legs, chest and arms in time with music. Dani danced with pure passion and joy, almost savage and violent in its energy. If your face had got in the way of one of his wild yet controlled arm swings, you would not be saying Olé for quite some time.

There is a word in Spanish used to describe flamenco dancers. Duende. There is no exact translation in English, but it signifies; passion, spirit, love, soul, joy, emotion, fire and energy all rolled into one. One can be an incredibly talented flamenco dancer, knowing every move perfectly and technically correctly yet still not have duende. This is not something learned, it cannot be taught, and it comes from within. It speaks to a true love and connection to the art, and is the highest accolade a flamenco dancer can aspire to. In my personal opinion, Dani de Francisco has duende in spades. After about 15 minutes of dancing he had to stop, not because he was tired or because the show was over. He had to stop because he was dancing with such passion!

After the performance was done, the open mic section was announced. Mics were turned off and all the chairs were arranged in a circle in the centre of the room. Guitars were passed out to anyone who felt confident enough to give it a go. Chairs and tables were used as percussion instruments, and everyone waited expectantly for the first person who hadn’t been on stage to dare to sing. They didn’t have to wait long. A big group of Romanies were attending the event, and with the tuneful declaration “yo soy un gitanooo” (I am a Romani), they each in turn added their contribution to the event. Given that flamenco has its roots among the Romanies, the unbridled power of these singers was a pleasure to watch. Their skill with flamenco did not seem like something they had gone to school to learn, but was part of their heritage and everyday culture, songs and style learned from a lifetime of exposure to the art.

It felt much more raw and closer to the original style of flamenco, going back centuries. I heard it described as flamenco jondo– deep flamenco, in somewhat reverential tones. Coming from a guitarist and singer this was high praise indeed. He had trained for years as a guitarist and singer but said he could not come close to what was being sung in Matisse Club’s flamenco circle.

I have been to this event twice and seen something different each time. I fully intend to return and I encourage you to do the same. It was truly an awe- inspiring experience and a privilege to watch.