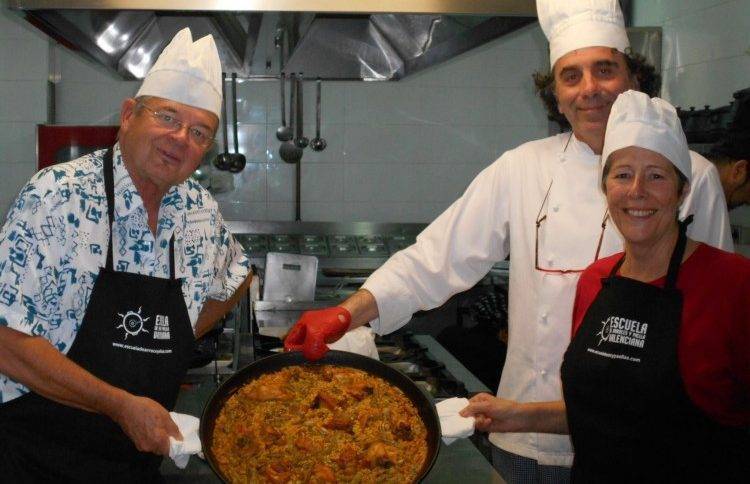 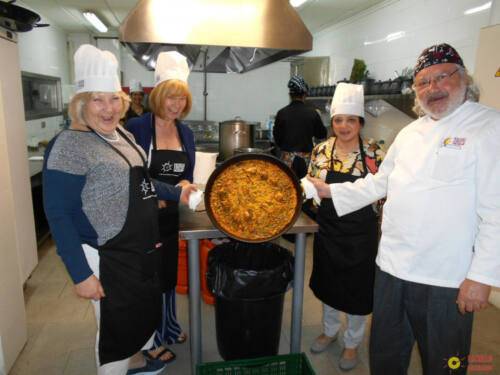 If you were to ask a Valencian what his favourite dish is, his answer would surely be paella. If you are invited on a Sunday for lunch at a Valencian’s house, chances are the first thing that will be said to you as you walk in the door is, “You like rice?” And once inside the flat, or in the garden if it is a house, it will be a male member of the family making paella. D and I have been living here in Valencia for a very long time, but I can count on the fingers of one hand, the times either of us have been allowed to prepare a paella – “Impossible, you are extranjero! (a foreigner)…You cannot make a proper paella, it’s impossible!” Our guests would prefer to take over the reins and prepare our lunch for us than to suffer a second- rate paella at the hands of a guiri (similar to grockle or tourist in the UK). You cannot play around with a paella Valenciana, it is always made with chicken and rabbit, and is nearly always eaten at lunchtime…

I hope I am making it clear that the paella Valenciana is sacred, really. I even have a friend whose parents lived in Paris for many years and couldn’t get their Sunday paella to taste right, so when they came to Valencia for family holidays, or when friends from here were visiting them in Paris, they always took Valencia water with them, for the paella.

So, it was with great trepidation that we accepted an invitation to Escuela de Arroces y Paella Valenciana (School of Valencian Rice Dishes and Paella) to learn to make a traditional paella Valenciana. I received a call in advance, asking D and I to be at the restaurant for 10.00h, as we would be shopping in Mercado Central for the ingredients first.

The escuela is on a quiet side street off C/ Caballeros in the heart of the historic centre, the Barrio del Carmen. We arrived at the same time as a Japanese couple who had signed up for the tutorial. We were shown to a table and offered a drink – coffee, beer, water – by our amiable host/guide/translator for the day, Ivan. There were to be five of us on the course today, Ivan told us, just as the door opened and the fifth guest arrived, a lady from California. We were left to chat amongst ourselves and get acquainted with each other. Our fellow students were from the same computer science conference at UPV (the University of Valencia) but had not previously met.

Drinks consumed, it was time for the first activity of the day, a walk through the alleys and streets of the Carmen to the Mercado Central – with the first of what were to be many picture opportunities of the day, Ivan was a one-man paparazzo! On arrival at the Mercado, Ivan gave an excellent, very informative, potted history of the building, before taking us to various stalls. Firstly, to buy the different green beans for the dish – we were making a summer paella Valenciana today, as beans are used in the summer and artichokes (alcachofas) in the winter, when the beans get too expensive. Then on to the chicken stall to order the chicken and rabbit we would be using – we would return for it a little later when it was chopped and ready for the recipe. So, on to the pimentón stall, paprika to you and me. Here we bought smoked paprika as we would be cooking our paella over gas, and the smokiness normally imparted by the traditional orange-wood re would be added in this way. We visited five of the market’s 400-or-so stalls to pick up the ingredients, including the azafrán (saffron), where we learned all about this highly prized and hugely expensive aromatic. Then, having returned to the chicken stall to collect our prepared meat, we made our way back to the escuela/restaurant.

Here we were introduced to Beni (José Manuel Benito), the chef, joint owner and technical director (with Jaime Cros Ferrandiz, commercial relations) of la escuela, who would be teaching us today.

Each of us were given an apron and chef’s hat to wear. Beni spoke no English so Ivan translated, and once we were dressed to Beni’s satisfaction, the course began in the spotless open kitchen. He explained that the type of rice that we were to use was introduced by the Arabs in the 4th century AD and that it was the oldest rice in Europe. The recipe for paella was over 300 years old, came from the huerta (the verdant market garden that surrounds the city to this day) and was originally a recipe for the poor, using ingredients from the land including frogs and duck.

Beni is a great teacher; he is amusing and authoritative and took us calmly through all the steps to make our perfect paellas. Whilst the ingredients which we had mixed with an enormous amount of water reduced into a delicious caldo (stock), we took a break and were invited to almorzar (eat elevenses). A delicious tortilla de patatas (a potato omelette which another of the chefs had been making while we cooked) was served with a large slice of Valencian tomato (they are surely the tastiest tomatoes in the world?) followed by clochinas al vapor (steamed mussels) and served with a crisp and cool white wine.

Then it was back to the kitchen to add the rice and to stay with the dish until it was perfectly cooked, which involved highly amusing steps and was very entertaining, and back to the table carrying our own paellas, which were arranged in a row as we all sat down to eat. A lovely salad was bought to the table and large glasses of red wine were poured to accompany our meal. Beni encouraged us to eat it with a spoon directly from the dish – the traditional way – and also to try each other’s as “no paella is ever exactly the same.” He was right, our Japanese friends had made a slightly more al dente version and our Californian friend had made hers a little less salty than ours.

While all this was going on the restaurant was filling up with diners just here to eat, it was great to see them looking at our three large paellas being eaten by just five people! And the five people were all wearing chef’s hats. We looked around us at the other diners and decided that the escuela was more than a place to learn to cook. It really is a place to eat, and to eat very well – the food and service looked great.

Was I embarrassed when D and I were asked to stand up and receive our diplomas and our wooden spoons? Strangely enough, I was actually very proud that we had managed to make what turned out to be one of the better paellas we’ve eaten in this fair city – and believe you me; we’ve eaten a lot of them.

I have purposely left a lot of the detail of our day out of this report, so that if you try it, and I strongly recommend you do, there will be enough surprises to make your day as enjoyable and memorable as ours. It is a really fun day, run by a friendly and very enterprising team of professionals who obviously really enjoy what they are doing. Judging from the other diners around us, this goes for the restaurant (Arrocería La Valenciana), too.