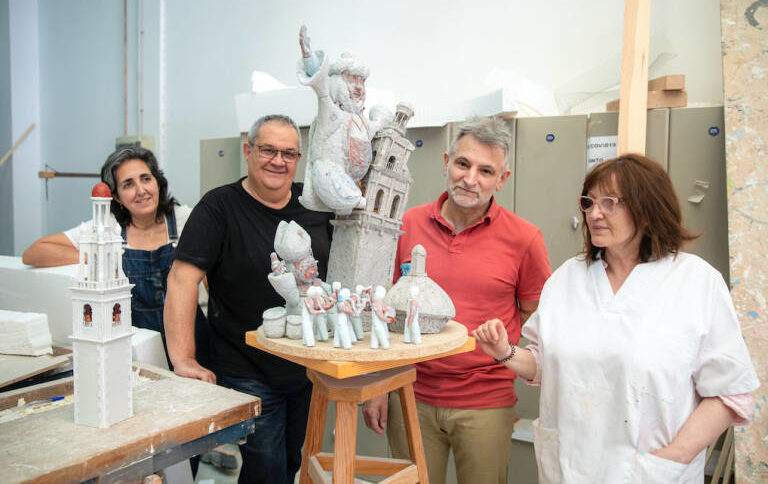 Artista fallero Paco Pellicer tells ‘24/7 Valencia’ how fallas are made, what he thinks of ‘corporate’ fallas and what he likes best about the fiesta.

Paco Pellicer and Marisa Falcó are fallas artists who run their own small workshop in the barrio del Carmen. The husband-and-wife team have been making fallas – the vibrantly-painted street sculptures that tower overhead on every corner during the fiesta of Las Fallas – since 1989.

I meet Paco in his workshop on Calle Cruz. It’s just weeks before Las Fallas and he’s working late, of course. Marisa and their two regular assistants are having a well-deserved break. Wearing a paint-splattered jumper, surrounded by half-finished figures and chunks of polystyrene, he starts to tell me how he got into this fascinating industry.

“Since I was a child, with friends, we made little things to burn in Fallas – just games, really. So I always had this ambition to build fallas. Then I met Marisa, and when we were still students we made a piece of stage decoration for a falla on Calle Castellón. Later they asked us to make the children’s falla for them, so we put a team together and did it.”

Confusingly, ‘falla’ is the word both for the sculpture and for the local association that pays for it. ‘Las Fallas’ refers to the fiesta in general. Every falla commissions two sculptures; a small one for children, called a ‘falla infantil’, and a big one which is at least six metres high.

“Our first attempt wasn’t too professional, it was a bit ungainly, but we learnt as we went. At the time Marisa was studying fine arts at the university; I was doing architecture. So we made a good team. I would make the structures and she would do the modelling and painting. I don’t know how to paint, I wouldn’t dare!”

The traditional way to become a fallas artist, says Paco, is to learn in a workshop from a ‘maestro’. “But this didn’t happen in our case. We knew nothing at first; all we had was our intuition. We learnt by trial and error until we developed our own style.”

In 1991 the couple moved into a workshop near Plaza del Angel, in the centre of the Carmen. From then on they began to make fallas mainly for the barrio. This year they have made five childrens’ ones and two big ones, including the childrens’ one for well-known falla Na Jordana.

For Paco and Marisa, the fallas season starts in earnest around November. During the rest of the year they do work for local theatres, shops and museums, making stage decorations and pieces for exhibitions. They’ve also worked for Agatha Ruíz de la Prada, making mannequins for her collections.

The methods of making fallas, Paco explains, have changed greatly over the years. The early fallas had a basic wooden structure, as they do now, but the figures’ heads and hands were modelled from wax. Later, cardboard was used to make the figures. You had to make a mould, fill it with cardboard paste, wait for it to dry and then stick the pieces together and paint them.

“This process was very slow and complicated,” says Paco. “Nowadays, the modelled parts of the fallas are always made from polystyrene, which was first experimented with in the ‘80s. Polystyrene is very light and manageable, and gives quite good results. You model it, cover it in papier-mâché and that’s it.”

But it does have one defect: when the falla is burnt on the last night, the polystyrene barely burns. “In the heat of the flames it more or less disintegrates, giving off a thick black smoke which, while not being toxic, is pretty ugly to see,” explains Paco. And the beautiful thing about watching a falla burn is watching the bright red flames. At least the structures are still made from wood!”

In this way, the fallas are a way of creating publicity and raising awareness of the problems in the barrio. Satire has always been a key part of Las Fallas. In the early days of the fiesta’s history, the fallas just dealt with neighbourhood politics. Soon, the festival got bigger and the themes of the fallas began to take in wider issues. But then came the civil war and Franco’s dictatorship – it was forbidden to discuss politics overtly through the fallas.

“The artists had to express their messages by playing with double meanings. Later, with democracy, political criticism returned, but mainly at the national or international level.”

However, adds Paco, nowadays the big-budget fallas are constrained by their sponsors. They have to do what is politically correct, whereas the smaller-budget fallas have the freedom to be more radical:“We did a falla on the Iraq war which was clearly anti-war, and the public reacted well.”

Marisa and Paco design the falla completely themselves, developing the theme from their own ideas and from local news and events.

“Our ideas for the subject of the falla are obviously limited by the budget which the falla commission is able to pay, which is not always so big. Sometimes you have to make a more minimalist plan. But we enjoy the challenge of trying to communicate many ideas with only a few elements.”

The budget for Plaza del Angel’s falla is around €6,500 – a fairly typical figure, although a lot of money for this falla, as the population of the neighbourhood is so small. The money comes largely from subs paid out during the year by members of the falla.

In the more modest fallas, money from sponsorship and advertising doesn’t figure much. “It’s more a community effort of friends. The bigger fallas have a lot more recourse to advertising and so their budgets are much bigger. Na Jordana’s falla costs around €180,000. The challenge for large fallas like this is to find wealthy supporters and commercial sponsors.”

And what does Paco think of Nou Campanar, the Chelsea of Valencia’s fallas? With its huge budget and truly gigantic proportions, it wiped the floor with the opposition, winning prize for best falla in the top category in the past. But it has attracted controversy as well as plaudits. The falla´s budget was sometimes a hundred times bigger than that of Plaza del Angel. Of course, all that money will be literally going up in smoke on the final night.

“Nou Campanar took a step too far, for me,” says Paco.“It forced up the other fallas’ budgets very much. And the money doesn’t go on contracting a falla artist with a high cachet – it’s simply to pay for the huge scale of the falla.”

Nou Campanar’s falla has reached a breathtaking 28 metres high. This, says Paco, has created an impetus to build bigger and bigger fallas. “In Las Fallas, the playing field is very uneven. If you have a load of money, you make a huge falla – and it’s not easy to compete with that.”

So was Nou Campanar worth the money in the past? “The falla has been perfectly executed in the past, certainly. It’s had all the best falla artists working on it. But I don’t think that its themes were particularly interesting. With the big fallas, the theme can’t be too political because they have a wider audience and so can’t risk offending people. It’s a bit like trying to compare big Hollywood productions with small art-house films. How can you judge which is best? Sure, the effects in Star Wars are fantastic, but if you prefer to watch another type of film, you won’t be so impressed.”

There is a hackneyed saying in these parts, which asserts that, such is the grand scale of Las Fallas, work on the next fiesta begins the very day after the current one ends. Is this true?

“Well, for us the work doesn’t begin full-time until November, so after the fiesta there’s a good break. But without realising it you are always turning over ideas for fallas, all the time. And because there are prizes awarded to all the different categories, this always motivates you to try and win, to think about what you could do next year.”

“For many years we’ve been making the children’s falla for Na Jordana, and for them we’ve been able to do some very interesting things. But we’ve won more prizes, including first prizes for best falla, with the low-budget childrens’ fallas in the lower categories. We’ve also won many first prizes for inventiveness.”

Does it make him sad, to see all that hard work go up in flames on the final night? “We always go to see the cremà [burning] of one of our fallas, and yes, it always makes me a bit sad to see it burn – not because they’re burning something beautiful that you made, but because you always leave something of yourself in a falla that you make. Every work has its memories, its associations, and so has sentimental value for me.”

“Yet I always watch them burn – you can’t not! It wouldn’t enter into my mind not to participate, because Las Fallas doesn’t make sense without participation. You have to go out in the street, watch the cremà. I like the fiesta very much. There are some things about it that I criticise – there’s a degree of over-organisation, a lack of variety and inertia within some commissions. But what I like best about Las Fallas is the street spectacle – it’s so vibrant.”

“I think Las Fallas is the most important thing for Valencia city right now. The whole year round, many people are involved or on the edge of the preparations – everyone joins together. The business generated by it nowadays is huge. More foreign visitors are coming, especially when the fiesta falls on the weekend. And every year there is more and more foreign media interest.”

“Las Fallas is for everyone, for all ages. Even though now I can’t go out all night long like I used to, the atmosphere is still there. You can walk around looking at the fallas, having a few drinks, and on every corner there’s a chain of firecrackers exploding. It’s like the city is performing.”