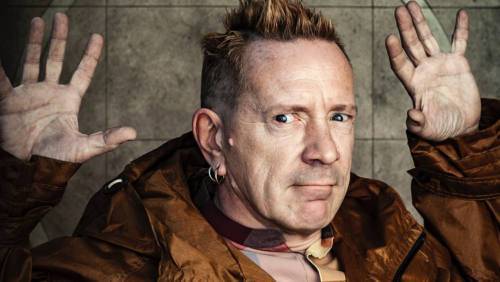 John Lydon needs little introduction. He is one of the most important figures in popular culture of the last 45 years. As Johnny Rotten of the Sex Pistols, with his ready sneer & dyed hair and searing wit and dangerous songs close to the bone, he was too much for the rigid British Establishment. The rabid tabloids labelled him the worst threat to British youth since Adolf Hitler. These days, he is regarded as “a national treasure.” How times change…

Back in 1977, taking a break from recording their legendary debut album ‘Never Mind the Bollocks…’ Rotten got slashed with a razor by pro-royalist thugs outside a London pub. They disapproved of his song ‘God Save the Queen’. It was to be the first of a number of physical assaults on Rotten who had become public enemy number one. Within a short space of time, the Sex Pistols were dropped and signed by 3 record labels in succession. By 1978, the Sex Pistols imploded on their American tour. Johnny Rotten soon reverted to his real name and became John Lydon and formed the experimental Public Image Limited aka ‘PiL’ in the same year. He and his band PiL played Valencia on May 6, 2016!

In an exclusive interview, ‘24/7 Valencia’ chatted for around 40 minutes over the phone with John Lydon in Los Angeles…as he was preparing for his European tour with Valencia (Spain) being the very first gig of the tour! Calling from a ‘locutorio’ in Valencia to L.A.…

JOHN LYDON: Hallo! Yes, barely, you sound like you’re shouting in a field! I can baaaaaarely (sing-song tone) make you out. Someone’s shouting in the background, can you talk louder?

Can we go through your new Pil album, ‘What the World Needs now…’?
(Mock indignation): Oh Gawwwd, do we have to?

‘Double Trouble’ is about an argument with my Missus about the plumbing! We ended up falling about laughing about it.

‘Know Now’ is based on a riff by Lu (PiL guitarist and multi-instrumentalist), it’s a simplistic song with as few words as possible and it is about confusion.

‘Bettie Page’ is about the 50s American pin-up legend. It’s a bass line that Scotty hooked onto. We were begging for a slow song, which is something we’ve never done before in PiL.

‘C’est La Vie’ is about people who lie and it is about being let down. It is not specifically about any one person. It is actually a positive song, there is no self-pity…there’s hope!

‘Spice of Choice’ is about the choices you make and being caught (laughs) if you’re married! Our bass player was in the Spice Girls and I have Spice Girls toy models that I enjoy to collect, so you’ll also find a sly reference to them in the song!

I believe that in life, you should know what you are getting into before you make your choices. I’m pro-knowledge.

24/7 VALENCIA: Is that why you are still alive and some of your contemporaries are dead?
I know my tap water from my gin! Heroin is the worst drug going and it obliterates self-doubt. It’s what killed Sid Vicious. He was my friend and I still miss him to this day.

‘The One’ is about me being an awkward 15 year old, going to social club dances and being shy about girls during the Glitter rock era of the early seventies. I wasn’t shy about going to Glastonbury festival as a young teenager though, as I learnt to bunk the fare and ‘travel’ on British Rail!

‘Big Blue Sky’ is a homage to the American deserts of places like Utah, Arizona and New Mexico. It’s about the vastness and spacious of these places. The natives of America were exterminated. There’s an influence from the Doors album ‘Other Voices’ that was done without Jim Morrison.

‘Whole Life Time’ is about me recovering from meningitis as a child. My memory was erased at the age of seven, I was in a coma for months and it took me 4 years to get back a sense of who I was.

24/7 VALENCIA: ‘I’m Not Satisfied’ isn’t the Muddy Waters song that the Rolling Stones covered. So, have you done the opposite with this song?

(Laughs) Yes! It’s also a song about my meningitis. After meningitis, it was a second chance to correct what was wrong with me inside. If I hadn’t been ill, I might have ended up as a lazy wannabee. Yes, it toughened me up. You can wallow in self-pity or you can do the opposite. Yes, having such a serious illness was clearly a blessing in disguise for me. It forced me to move forward and it gave me my drive.

‘Corporate’ has rhythms that sound Orwellian. What is it about?
(Cryptically) It might be about the music label… but it could also be about Donald Trump! I don’t like the world being run by “headless chickens”. What you end up with is big business and the Panama Papers…

‘Shoom’ is about my dad and his dry sense of humour, like the man sitting in the corner of the pub being ironic. I didn’t get his humour when I was younger and I used to take the bait every time. With age, iv’e come to appreciate it so much more, there’s a lot of truth in irony and saying the opposite of what you really mean. He passed away in 2008 and I really miss him too…

Where did you record the album?
We did it in the Cotswolds in England. It took about 8 weeks. The local pubs were great but the local Tories didn’t take too kindly to us!

Can you tell us about the album cover that you painted?
It’s a painting of a Hopi Indian who is the jokester or prankster of the tribe. Every culture has a jester and it is something i associate with and can relate to. I have loved painting since I was a child but I don’t paint for commercial reasons, more for enjoyment and for our album covers.

Your parents were Irish but you grew up in England. Do you feel a pull more towards Ireland or England?
Both. My Dad was from Galway and my Mum was from Cork. When I was in Ireland, the Irish would say I was English. When I was in England, the English would say I was Irish! (laughs). I have both British and Irish passports. With time, I think having both influences is an advantage not a disadvantage as it makes you more open-minded.

What did you learn from being in The Sex Pistols?
How to get out as quickly as possible! I felt it was becoming a joke, trying to turn us into The Rolling Stones. My final statement at the last gig was: “ Ever get the feeling you’ve been cheated?” and I think the rest of the band felt the same way.

What was punk for you?
Punk gave freedom to women, to have mixed-race bands, to end false barriers. With the Sex Pistols we weren’t interested in divisions of North and South, it was about unity and doing your own thing.

How do you feel about fellow Londoner David Bowie’s death?
I thought his passing was very classy with no pomp at all…

How does London compare to Los Angeles in terms of a place to live and work? What is the difference?
The weather! London was a shithole when I was growing up and it’s a shithole now…that’s about it really. Of course, I miss the culture, the comedy & the pub life but I don’t miss the cold and the damp of England. Due to respiratory problems, my flu could easily turn to bronchitis and to pneumonia living in England so it is healthier for me to live in California. Yes, the weather is about 80% of life. Go West, young man!!!

Tell us about your recent book ‘Anger is an Energy’, which I got out from the library while on holiday in London. I thought it was enjoyable and a great read.
I’ve always loved writing but I felt that if I wrote that book too early it would be full of self-pity. Writing books is more of an achievement for me than anything iv’e done in pop music. Libraries saved me and educated me. I’m energy and ideas. There’s always something going on, high energy, even when I’m sleeping. I like the fact that you got my book out of a library!

You have said that Olivier’s Richard III was an influence on your stage persona. You also follow football. They found the King’s bones under a car park in Leicester not so long ago. How did you feel about Leicester FC’s giant-killing race for the Premier league title?
Fantastic! I wanted them to win it. It put all the know-nothings in their place.

Did you follow Gary Neville’s stretch as a manager with Valencia CF?
Yes. Gary Neville was and is a great football analyst. The problem is he went to Spain without being able to learn the language or being able to adapt to the culture in such a short space of time. These thing are difficult and take time and there were already problems at the club. (Gently and diplomatically) It’s very easy to look for failings from the outside…

24/7 VALENCIA:Do you know Spain at all?
Yes, I love Spain. Basically, as soon as I was able to afford to I’ve been travelling, including to Spain since the days of the Pistols and PiL. I love the differences of the varying regions of the country. I’m not a tourist type, I prefer meeting local people in places like Fisherman’s bars and communicating with them in whatever way, be it sign language or other ways. It’s making the connection that counts.

Our time is up. It’s been fun, an interesting chat and Lydon becomes Johnny Rotten as we say our goodbyes:

John Lydon turns to Johnny Rotten:: “PEACE! AND IF YOU DON’T LIKE PEACE YOU CAN PEEEEEEEEACE OFF!”