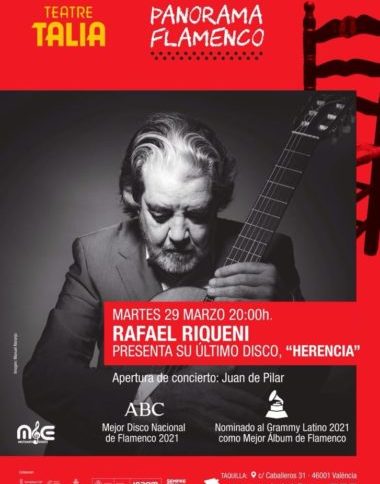 Rafael Riqueni  presents his latest album, ‘Herencia’ in Valencia on March 29th at ‘Teatre Talia. ‘ The album has has been nominated for the Latin Grammy 2021 for Best Flamenco Album. The flamenco concert guitar is one of the great historical aspects of Spanish music, a discipline made popular by names such as Sabicas, Serranito and early Paco de Lucia. As in classical guitar, the flamenco virtuoso performs alone on stage. After Parque de Maria Luisa, an album considered by critics to be an absolute masterpiece, ‘Herencia’ is Rafael Riqueni’s new album. In it, he delves into the paths of the flamenco concert guitar. Herencia is Rafael Riqueni’s response to the history and tradition of the flamenco guitar.

Rafael Riqueni was born on 16 August 1962 in Seville. At the age of twelve he gave his first solo performances and at the age of fourteen he won the two main national guitar prizes, the Ramón Montoya de Guitarra de Concierto in the VIII Concurso de Córdoba, and the first prize in the VI Certamen Nacional de Jerez. In 1981 he would win again the first prize in Jerez.

In 1986, Riqueni published what would be the first chapter of one of the most celebrated discographies in the history of flamenco and Spanish music, Juego de Niños, in which he offers new harmonic and compositional concepts that begin to define his unmistakable style with classical influences. His next album, Flamenco, became an object of worship for generations of guitarists. In 1990 his definitive consecration came with Mi Tiempo, in which Riqueni also composed string arrangements that acted as an extension of his guitar. The next album was Suite Sevilla, in 1993, a conceptual work inspired by flamenco and conceived under the classical influence of Spanish musical nationalism, is possibly the first work to successfully fuse flamenco and classical music. In 1994, Rafael Riqueni published Maestros, in which he paid tribute to Niño Ricardo, Sabicas and Esteban de Sanlúcar.

Alcázar de Cristal in 1996, becomes his last album for twenty-one years. After the meeting with Paco Bech, it is in 2014 when the Bienal de Flamenco becomes the stage for the desired reappearance, his interpretation of “Amarguras” turns out to be one of the most celebrated moments of the festival. Rafael Riqueni will receive the Giraldillo de la Bienal a la Maestría, “For his very universal Sevillian music, which places him among the greatest masters of the history of the guitar”.

At the end of 2015 he presents the work Parque de María Luisa at the Teatro de la Maestranza in Seville, with a concert that is a historic success and receives unanimous critical acclaim. The new and seventh album by Rafael Riqueni is released with Universal Music in 2017, Parque de María Luisa thus becomes the return of one of the greatest geniuses to emerge from music in Spain, with the work where he evokes the memories of the emblematic Eden of his hometown. Also in 2017, Rafael Riqueni receives the XXXI Compás del Cante, while the main newspapers and specialised media place Parque de María Luisa as a masterpiece and the best flamenco guitar album in recent history.

In 2020, Rafael Riqueni presents his new album Herencia at the Teatro Lope de Vega in Seville, and then embarks on a national and international tour. After his performance at the XXIV Festival de Jerez, Riqueni wins the ‘Guitarra con Alma’ award of the edition, and at the XXI Bienal de Flamenco, he is awarded the Giraldillo Ciudad de Sevilla. In April 2021 he premieres a new show, Suite Sevilla, Concierto para Guitarra y Orquesta, a symphonic version of the work of the same name, together with the Real Orquesta Sinfónica de Sevilla (ROSS) and at the Teatro de la Maestranza. A season that consolidates the show Inicio (Uno) with Rocío Molina, performing seven nights at the Théâtre Chaillot National de la Danse in Paris, a theatre to which Rafael Riqueni returns in February 2020 to present his new work Nerja, a descriptive fantasy based on the musical impressionism and closeness to Spanish classical music that have defined a large part of his career…

When purchasing tickets online the price that will appear will be the final price, including administration fees and applying the discount of the promotion in force at the time for each performance. Please check all your details before finalising your purchase, as we cannot make any changes or refunds once the purchase has been made.