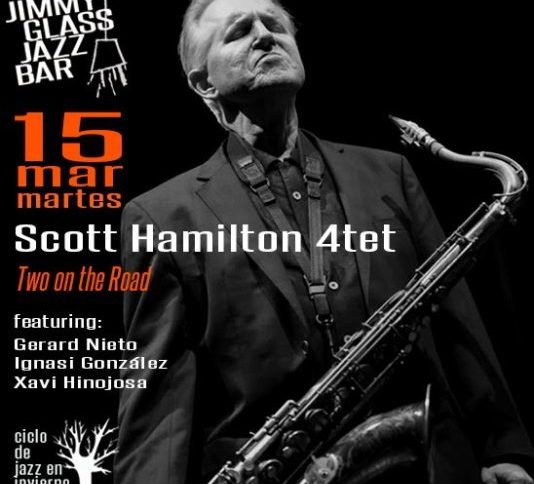 RESERVATIONS: reservasjimmyglass@gmail.com
(Indicating the name, number of reservations, date and name of the concert and for which of the two passes reservation is requested or if it is for both sets)

24/7 VALENCIA: COULD YOU TELL US MORE ABOUT SCOTT HAMILTON?

JIMMY GLASS: We are happy to see the return to ‘Jimmy Glass’ of the legendary  tenor sax  player Scott Hamilton (Rhode Island, 1954). Hamilton moved to New York in 1976, where he got his first hand works from Roy Eldridge, playing with Hank Jones, singer Anita O’Day and Benny Goodman’s Big Band.

In 1977, he recorded his first album, which has left its mark on the jazz scene ever since.

In the early eighties, he formed his own quintet and did tours around the world. From that moment, he left aside Ben Webster and Zoot Sims’ strong influence to seek a more personal language and tone. He has collaborated with jazz greats like Gerry Mulligan, Junior Mance, Lou Donaldson, Harry “Sweets” Edison, Gene Harris or Ray Brown.

Scott Hamilton is  influenced by Coltrane and the eruption of fusion—especially with rock but also with other musical genres—, his solitary and eloquent style inspired by Charlie Parker and also Coleman Hawkins, Lester Young, Chu Berry, Ben Webster. A deep and warm sound style, with solos telling a story, inspired and loaded with an intensity that reaches the audience.

Hamilton has nearly forty records as a leader. At Jimmy Glass, he will present the album ‘Two For The Road.’

Jimmy Glass opens  at 8pm for the first set and 10pm for second set. You can pick up and pay at Jimmy Glass entrance the same day of the concert.Pre-order tickets for each set (whoever wishes will be able to make a double reservation to continue on the second pass by informing in advance and with a discount of approx 50%. for the second pass).

Mandatory occupation by strict order of entry of tables, bar seats or chairs until completion of the allowed forum (there can be no people standing without occupying a seat).

Confirmation of the reservation involves acceptance of operating measures on Jimmy Glass: with hydroalcoholic gel available for customer use. Mandatory use of masks, except temporarily during actual consumption of drinks or food.

Direct service to tables (in any case, bar access is only allowed to pick up drinks or make payment).
Pre-orders: reservasjimmyglass@gmail.com

JIMMY GLASS
C/ Baja, 28
46003
Valencia
Spain
18 € one set / 25 € the two sets
RESERVATIONS: reservasjimmyglass@gmail.com
(Indicating the name, number of reservations, date and name of the concert and for which of the two passes reservation is requested or if it is for both passes)
https://www.facebook.com/JimmyGlassJazzBar
https://www.jimmyglassjazz.net/
Tag gamilton GLASS jazz JIMMY quartet saxophone scott