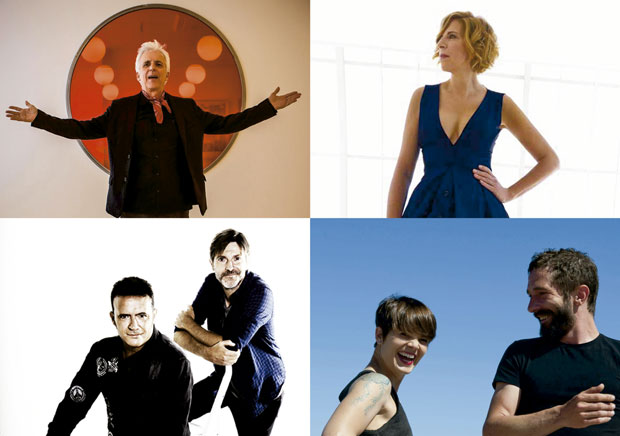 Strict security measures will be followed

The general director of Culture and Heritage of the Generalitat Valenciana, Carmen Amoraga, presented this morning the cycle of concerts ‘A la llum de la lluna’. The event took place in the old monastery of Sant Miquel dels Reis de València, where the shows will be held, and also had the presence of some of the artists who will be part of the festival: the singer Sole Giménez and the leader of Seguridad Social, José Manuel Casañ, as well as the illustrator Paco Roca, who signs the event’s poster.

The cycle ‘A la llum de la lluna’ is one of the initiatives of the Valencian government to promote the music sector in current circumstances. Furthermore, as Carmen Amoraga has stated, the festival unites “art and heritage, two substantial elements of culture and leisure”. The director general said that “heritage spaces can and must have various uses related to culture. “In this way, the city is invited to contemplate the spectacular programme and to admire the architecture of great Renaissance value that the monastery of Sant Miquel dels Reis possesses,” she explained.

Amoraga also highlighted the virtues of the monastery when it comes to performing open-air concerts…the stage will be in the southern cloister of the 16th century building and the starry sky.

As a consequence of the health crisis caused by the coronavirus, the organization has adopted a security protocol that will be followed in all actions. In this sense, it will be compulsory to use a mask and to rent hydroalcoholic gel hands, which will be available in the toilets and bathrooms. On the other hand, it will be necessary to keep the distance of security during the stay, in the displacements to bars and toilets and at the time to accede and to leave the enclosure, that will be realized in a segregated way. Finally, the tickets will be named in order to guarantee the traceability and will be assigned the seats at the moment of the reservation.

The staff and the facilities must also comply with strict sanitary measures. First of all, the staff will be trained according to the protocols against Covid-19 and will have individual protection elements (EPI). As for the venue, it will be equipped with the appropriate signage to maintain the security distance and will proceed to the cleaning and disinfection before, during and after the concerts.

The festival ‘A la llum de la lluna’ will take place on the 25th of September with a performance by Kiko Veneno. The singer and guitarist will perform songs from his most recent album, Sombrero roto, and will rescue classical themes from his career. Born in Figueres, but living in Seville for decades, the composer is one of the exponents of the fusion of flamenco with pop and rock. His distinctive voice goes from being involved in groups like Veneno, in company of the Amador family, and in albums like Échate un cantecito (1992), El hombre invisible (2005) and Sensación térmica (2013).

The first night of the cycle will be completed with the spectacular Canciones dibujadas by Seguridad Social and Paco Roca. The group and the Valencian illustrator will combine music and drawings while they dialogue with the public. In this unique and intimate performance, the most familiar songs of the group led by José Manuel Casañ will come to life thanks to the author’s paintings. It should also be noted that Casañ i Roca will collaborate in the volume La encrucijada (2017), a dialogue on creation, music and friendship.

One week later, on October 2nd, the monastery of Sant Miquel dels Reis reopens with Zenet. The malagueño will evoke the old Cuban boleros that will be part of his latest studio work, La guapería. In this way, the singer will remember some of the iconic figures of the genre: Bola de Nieve, Celeste Mendoza, Olga Guillot, Rolando Laseire, Nelson Pinedo or Marta Valdés. In spite of maintaining the original essence of the compositions, Zenet is able to give a modern touch to these classic tunes via his distinctive performances.

The festival will be held on October 16th for Sole Giménez and the show Mujeres de Música. In this way, she has chosen fishes from Spanish authors (Mari Trini, Rosana, Rozalén) and from Latin America (Chabuca Grande, Violeta Parra, Natalia Lafourcade) in order to give visibility to their work. Thus, Sole Giménez has given new life to these songs to give justice to authors who have been ignored for so long, despite their importance.

The cycle ‘A la llum de la lluna’ will take place on October 23rd with the duet format by Mireia Vives and Borja Penalba. The singer and the guitarist will present their third album, ‘Cançons de fer camí’ (songs to make a way), which has been awarded the best songwriter’s album in the II edition of the Carles Santos Awards for Valencian Music. The repertoire is formatted by compositions that speak of feelings and stories of past and present. In addition to their own works, they also play songs by Maria Mercè Marçal and Montserrat Roig and collaborate with writers such as Joanjo Garcia, David Caño and Roc Casagran.

Entrance to the concerts ‘A la llum de la lluna’ is technically free… but the public has to pay 2.50 euros per place regarding the concert for security reasons. Reservations can be made through the page www.alallumdelalluna.com

Founded by the Duke of Calabria, it is one of the best examples of Renaissance Valencian architecture. Recently refurbished, it acts as the Valencian Library. The refurbishment combines respect for history with technological advances.