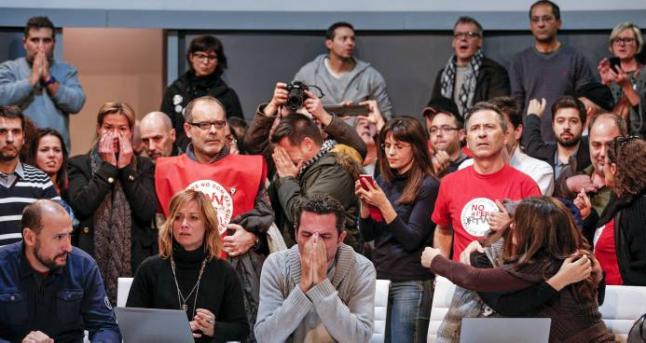 ##Despite last-minute pleas and hopes for some sort of settlement, on November 27, 2013, the PP-controlled (the Conservative Partido Popular) Valencian regional parliament voted to close down Canal 9. This was after years of turmoil in the publicly owned Valencia TV channel and its parent organization RTVV, complete with on-air protests, workers being sacked and then reinstated, tales of bloated excesses, gross mismanagement and falling viewing figures. It wasn’t meant to be like this.

Canal 9 was heralded on its inauguration in 1989 as the channel for and by all Valencians. The name was a play on words in the Valencian language. The number 9 is associated with the region because of 9 October, Valencia’s regional day celebrating the conquest of Valencia by King Jaime I, and the pronunciation of the number in Valencian, Nou, which also means ‘new.’ Broadcasting started on, of course, the 9th of October that year.

This was towards the end of the period of Spain’s transition to democracy. The new, wide-eyed and innocent political class (who eventually became the hackneyed corrupt lot) were on a wave of euphoria. They were ready to tear down the centralist structures of the dispatched dictatorship and give a meaningful and decisive role to each of Spain’s regional autonomies. This was backed by a society thrilled with dreams, new projects and plans, and hopeful anticipation of how the new democracy would be. There was no room for cynicism. Anything was possible.

In the midst of all this, Canal 9 was born. In the spirit of the times it was seen as the perfect vehicle for enhancing and standardising the role of the Valencian language, which during the Franco period had been relegated to casual and informal use amongst friends and families, with the hope of making it the principal language of media and communication in the region. It also had the equally important objective of bringing back a shared cultural unity for the region, which historically had been united for centuries under the ‘Kingdom of Valencia’ and was starting to claw back its identity after years of dictatorship.

Canal 9 had its critics, but you have to say it helped to achieve these objectives to a certain extent. It made a contribution to bringing together the people of Alicante, Castellón and Valencia and promote the idea of a Valencian identity. It reported on and promoted local festivals like the Fogueres de San Joan in Alicante, the Magdelena in Castellón, the Misteri in Elche or the Fallas in Valencia and produced numerous documentary programmes bringing the history, people and landscapes of Valencia to our screens. For many people, it also was the main source of exposure to the Valencian language, increasing its profile and its credibility. And at least it gave us a rest from the domination of the tiresome ‘El Clásico’ tyrants by talking a bit about local football teams, although Levante and Villarreal fans will
always say there was a bias towards Valencia CF.

So, what went wrong?
Like so many things born of the new hope brought about by the new democracy, it lost a sense of proportion. While it at least partially achieved some of its original goals, they were increasingly pushed to the background in favour of the vanity and overreaching bluster of the politicians who ran it.

Very quickly it wasn’t enough for Canal 9 to be just a mouthpiece and showcase for Valencia. It wanted to be a major channel competing, in the region, with national channels like Antena 3 and Tele 5 who naturally have purely commercial objectives. The schedules became increasingly filled up with Mexican soap operas and old Westerns, which were initially dubbed into Valencian but the number of programmes in Spanish increased year by year. The final year, only 42% of the output of Canal 9 was in Valencian, compared to 58% in Spanish, and only 32% of its output was self-produced. Programmes like ‘Parle Vosté’ where Valencians aired their views on local issues were replaced by the infamous people-shouting-at-each-other-about-nonentity-celebrity-gossip show ‘Tómbola’ which ran from 1997-2004 and was broadcast in Spanish. Not surprisingly, it was Canal 9’s greatest success and was franchised to local channels all over Spain. The other major problem was the transparent lack of political objectivity. Canal 9 almost always, until impending closure, toed the political line of whoever was in power locally to an almost embarrassing extent. Little by little, this led to a drop in audience as people became increasingly tired of what they saw as manipulation by the local government. Amazingly, but well in keeping with the deranged period of devil-may-care local government spending of the time, that fall the audience figures were accompanied by huge increases in staff and budgets at the channel.

When the opposition complained that Canal 9 had lost sight of its objectives, the response was to throw more money at the problem by creating two more locally run channels. Punt Dos was totally in Valencian and dedicated to local issues and events (Hang on … wasn’t that what Canal 9 was supposed to do?) and Nou 24 was a 24-hour news channel in Valencian dedicated mostly to international news (just what the world was waiting for!).

With the coming of the recession, this all became unsustainable, especially considering its audience share in the Valencia region was averaging just 3% (the maximum share reached was about 30% when the channel showed football matches involving Valencia CF). People round here were saying that they wanted a Valencian channel representing their region but not many of them were watching.

The first redundancies were announced, and an official collective dismissal order was approved making over 1,000 Canal 9 workers redundant. A new, slimmed-down, more ’efficient’ Canal 9 aired on October 9, 2013 (complete with an expensive new logo and an extensive advertising campaign). Then, on 5 November of that year, the Valencia High Court declared the dismissal order null and void and that all the workers must be reinstated. The regional government’s reaction to this was to announce plans to completely close the station down. Now in complete rebellion, Canal 9’s new presenters started to turn against their masters and read out a rejection of the government’s plans on the midday news.

Which brings us to the events of Thursday the 27th and Friday the 28th of November 2013. After a feisty debate and last-minute attempts by the opposition to find a solution, the regional government approved the closing down order. They tried to catch the unions and the staff of the channel out and avoid as much media attention as possible by attempting to close down broadcasting in the middle of the night on Thursday. But hundreds of Canal 9 workers were waiting for the official liquidators and managed to stop them from entering the building. There were plenty of local police around but, not wishing to cause a riot, the liquidators decided to take the legal route and applied for a judge’s order allowing them entrance to the building. This wouldn’t be conceded until the next morning, which allowed the channel to broadcast the heroic stand of the workers besieged inside the building, making their protest and showing the human side of the situation — the reality that over 1,000 people were about to lose their jobs.

Then came the true hero of the hour. When the order finally came, the technician who had been brought in to turn off the signal, a TV repairman from Gata de Gorgos named Paco Signes (known to everyone in the village as Paco ‘Telefunken’ after the now defunct TV manufacturers) refused to pull the plug. He’d been brought to the station hours before but having seen the situation, he decided he was on the side of the workers and declared on live television, “I’m off, I’m not cutting the signal.” And off he went in his van with his nephew Pepe to great cheers and applause. He developed over 3,000 followers on Twitter and went into Valencian folklore.
The channel was finally cut off at 12.05h on Friday the 28th of November. Regrettably, Canal 9 was not the only big closure in that time of recession, but they were the only ones who were able to broadcast their last stand for 12 hours on live television. A propaganda disaster for the regional government.

The channel was grossly overreaching, overstaffed and unjustifiably costly to run. However, one thing is for certain — there is a need for an outlet to talk about local news, about local issues, local events and some football news that isn’t just the two big city clubs.

By David Rhead and José Marin