You are here: Home  /  Music  /  Popular Festivals  /  LIVE MUSIC IN VALENCIA IN AUGUST ‘NITS AL CARME’ (BY THE PORT)
Music 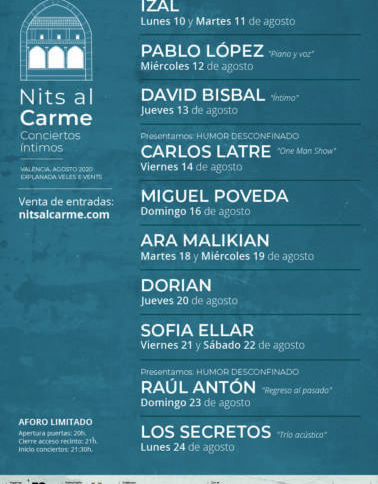 24/7 VALENCIA:Could you tell us more about ‘Nits Al Carme’?

‘NITS AL CARME’: Music returns to Valencia on August nights under the name of ”Nits al Carme”. These intimate and exclusive concerts will take place, exceptionally, in an acoustic format in the ‘Veles e Vents’ building, an icon of the Royal Marina Juan Carlos I of Valencia and an example of the contemporary architecture built in Valencia in the 21st century.

From 10 to 24 August we will be able to enjoy 13 unique open-air performances by great artists from the national and international scene. Very exclusive concerts in a unique place, with limited capacity, which will have the opportunity to experience the music of your favorite artists safely and closer than ever.

‘Big Sound Entertainment’, the music promoter organising these exclusive concerts, has managed to reinvent itself in the face of adversity and adapt to current circumstances by offering a new way of experiencing live music, and will pay special attention to complying at all times with the protocol and health safety measures indicated by the authorities to ensure the care of the audience, artists and workers.

The concert series will be held on the esplanade of the Veles e Vents building, located on the city’s coast, at a strategic point with the aim of seeing and being seen, next to the Malvarrosa beach, at one end of the new dock in the port of Valencia.

The Veles e Vents is an innovative architectural proposal by the prestigious architects David Chipperfield and Fermín Vázquez, which was born with the aim of hosting the guests and spectators of the 32nd America’s Cup, and which has undoubtedly become an icon of its passage through the city of Valencia. The building won the prestigious European architecture award LEAF in 2007.

It takes its name from the homonymous poem by the 15th century Valencian poet Ausiàs March, the greatest exponent of the Valencian Golden Age, which tells the story of the author’s journey from Italy to Valencia in search of his beloved. During the journey he runs great dangers and invokes the force of the winds to reach the mainland.